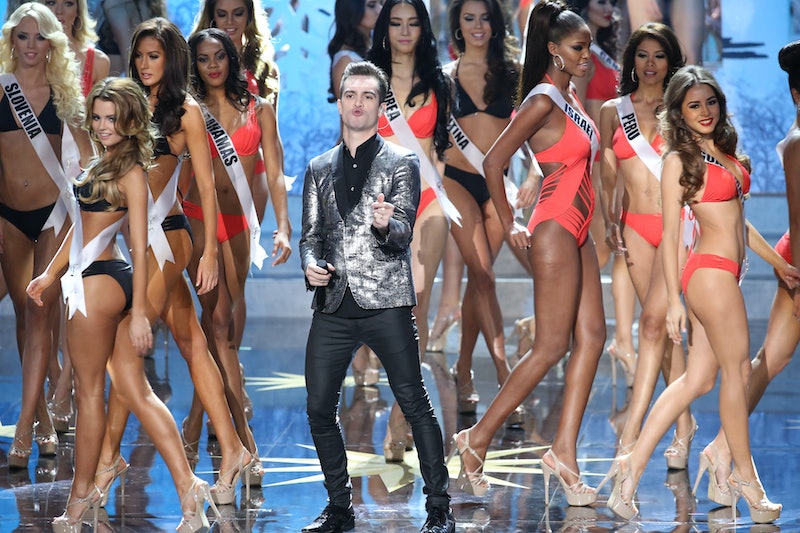 Maybe it’s all that hairspray wafting around, but 2013 seems destined to take the crown as the The Year Of The Weird Beauty Pageants. OK, so it’s not like Sandra Bullock had to go all Miss Congeniality on everyone to fight a domestic terrorist cell, but the year's events were still bizarre. From tattoos and fat-shaming to botched answers and prison threats, we break down the good, bad, and downright cringe-worthy events from the pageant world this year.

The Transformation Of Miss Universe

And when we say transformation, we mean Transformers. During the national costume parade on Nov. 3, Miss USA Erin Brady decided to dress up as a bedazzled Optimus Prime, fashioned by a Victoria's Secret designer. What better way to pay homage to all things 'Murican than to dress up as a plastic toy/Michael Bay film character?

The costume choice wasn't the only thing causing a stir at Miss Universe 2013, held in Moscow this year. Bravo's Andy Cohen was supposed to host, but backed out in protest of Russia's new law banning "homosexual propaganda." Then, after Miss Venezuela Gabriela Isler was crowned Miss Universe on Nov. 9, she stepped out into official duty on Sunday wearing only a "simple" swimsuit — simple in the sense that it was encrusted with $1 million worth of emeralds, rubies and diamonds.

In Atlantic City, N.J., the Miss America pageant made its triumphant return to the fabled boardwalk after an eight-year hiatus. And it was actually kind of cool.

As a sergeant in the Army National Guard, Miss Kansas Theresa Vail was an early favorite, standing out for baring a huge tattoo on her side torso. But what would a pageant be without some controversy? Before the ceremony, it was revealed that Miss New York Nina Davulari was recorded calling 2012 winner Mallory Hagan “fat as f—k.” Davulari had previously told reporters that she'd suffered with bulimia in the past.

Davulari ended up winning the title, becoming the first woman of Indian descent to claim the crown. But some idiots weren’t too happy about that, taking to Twitter with racist comments like “9/11 was four days ago, but she gets miss America?” and “Congratulations Al-Qaeda. Our Miss America is one of you.”

Responses That Made Us Facepalm

Ever since Miss South Carolina Teen USA gave that rambling statement in 2007 about believing “that our education like such as in South Africa and, uh, the Iraq, everywhere like such as...", it seems that not a year goes by without some crazy, viral-ready response from a beauty queen. This year was no exception.

In June, Miss Utah Marissa Powell was asked about the wage gap between males and females at the Miss USA pageant. Her answer? “I think, especially the men are … um … seen as the leaders of this, and so we need to see how to … create education better. So that we can solve this problem. Thank you.” Suave. (She later tried to clear things up with Matt Lauer on the Today show.)

And in August, Miss Philippines USA was asked which of the five senses she would want if she could only pick one. Stupid question, followed by a much stupider answer: “I would pick seeing. Because seeing is the best sense that we can ever see, because seeing is believing, and believing into what you see is perfect.” Whoa. Deep.

Could a pair of sky-high sandals lead to time behind bars for Miss Universe? After posing for a footwear fashion shoot in front of the Taj Mahal on Oct. 6, Indian authorities notified Miss Universe 2012 Olivia Culpo and her crew that they could face possible jail time and a hefty fine of $1,600.

The uproar over the shoot, which some labeled “disrespectful,” led Culpo and Miss Universe organizers to issue an apology to the entire country of India on Oct. 14. Culpo was in violation of India’s Heritage Act, which requires permission for any commercial activity done at a World Heritage Site. Rhode Island-bred Culpo, who is currently dating Nick Jonas, said that she has hesitations while doing the shoot and thought it was “inappropriate.”

Is it finally the beginning of the end for Toddlers and Tiaras? Producers of the show say it's no longer in production, but stopped short of labeling it an outright cancellation. And France is actively pursuing a ban on child beauty pageants.

"The proposed law, which passed the French senate but has yet to pass the lower house, targets only beauty pageants for girls younger than 16, which is easy, since they are seen as a bit of tasteless theater imported from the United States. How French," writes Christopher Dickey at The Daily Beast.

And in Ireland, organizers of the country's first child beauty pageant had to find a new, secret venue for the event, since it was so controversial. Irish Sen. Jillian van Turnhout who said the young girls who participate are forced into “roles of seduction”.

Love you, Honey Boo Boo, but it might be time to call it quits.

The Miss World competition faced its fair share of criticism this year. Some Muslims were quick to denounce the pageant, even calling it "pornography" — the pageant prominently features contestants in skimpy bikinis and revealing evening gowns — for being held in Indonesia, the most populous Muslim country in the world. In response, organizers cut the swimwear segment for a tamer beachwear competition, and relocated the finals to Bali.

But the weirdest part of the Miss World pageant is something of a head-scratcher. For the first time, Uzbekistan sent a contestant, 18-year-old Rakhima Ganieva, to participate. The thing is, no one really knows how Ganieva earned her crown. The country's ministry was tongue-tied when asked about a Miss Uzbekistan pageant, and no prominent modeling agencies seem to have heard about Ganieva or a country-wide pageant at all. Suspicious, no?

OK, this is disturbing. Miss Teen USA Cassidy Wolf had her computer's webcam hacked without her knowledge. She contacted authorities after receiving an email threatening to reveal images obtained via the webcam unless she sent the hacker nude photos of herself, a crime known as "sextortion." Jared James Abrahams, 19, of Temecula, Calif., a former high school classmate, was charged with the crime, freed on $50,000 bail, and ordered to wear a GPS, and have his every move on his home computer tracked by software. Abrahams, who pleaded guilty on Nov. 12, faces up to 11 years in prison and a $1 million fine at his March sentencing.

Wolf wants to send a message to other teens: Be careful with what you post online, and always be aware of anything that seems amiss.

In spite of, well, all of the above, there's definitely been a lot of good in beauty pageants this year. Ms. Veteran America Denyse Gordon is using her platform to address sexual violence in the military, since she was harassed during her time in the Air Force. HBO aired a documentary on the Miss You Can Do It pageant, which invites special-needs children to be beauty queens for the day.

And in Arizona, Kristina Anderson is preparing to compete in the Nov. 29 Miss Arizona pageant. Anderson has a rare form of ovarian cancer, but she decided to focus on the pageant as a positive distraction. “Rather than focusing on white blood cell numbers, the reality of the disease and the outcomes, staying positive is half the battle," she said. "I see a lot of people who get down and depressed and crawl in a hole, and my idea is to be positive as possible."