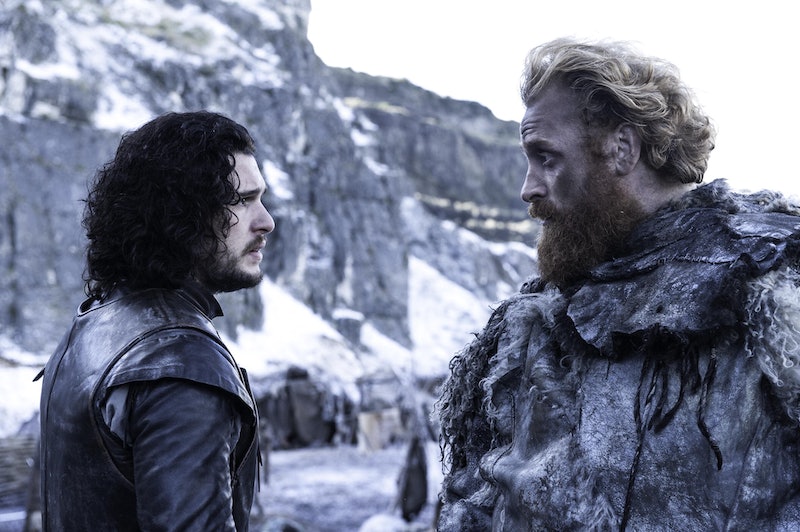 After nearly five long seasons of "Really, winter is coming, eventually, it's just running a little bit late," we finally got to see what those Stark words really meant on Sunday night's episode of Game Of Thrones, "Hardhome." The epic, undead battle between Jon Snow and the White Walkers in shades of blue was an electrifying, freaky as hell 20 minute sequence, and seeing a re-risen skeleton give Jon Snow, Lord Commander, the "come at me" gesture while thousands of Wildling dead rise up blue-eyed behind him was worth it. Jon Snow might know nothing, but Kit Harington was kind enough to share details about filming the battle at Hardhome on HuffPost Live during an interview about his new film. "It's all coming to fruition now," he said.

Amen, baby. Harington, 28, said the 20 minute scene took an entire month to film. "Last night's episode was crazy," host Alyona Minkovski said, to which Harington replied, in true Jon Snow fashion, "Mmmm." No smile in sight. Maybe he was still frozen solid from the month-long shoot. "We shot less than a minute a day! It’s so CGI-heavy. It’s unlike anything I’ve ever done on Thrones. I’ve always been proud of the way Thrones doesn’t go overboard with special effects, but, in this sequence, they had to," Harington recently told Entertainment Weekly.

And, as he predicted, it was SPECTACULAR. And, even though Minkovski insisted the shooting must have been miserable, Harington said that some of his "fondest memories" on Thrones were from filming the battle. "You just kind of muck in with Thrones," he said. "All the money on Thrones is spent on the actual sequence of finishing the thing, none of it is spent on the actors' luxury. So we had this tiny cast tent with a river running through it." Kit Harington: masochist! Just like Snow!

Although, worthwhile to note, that during his interview with HuffPost Live, Harington said that he and Jon Snow are not much alike, and that the actor himself doesn't really understand the sadboy Lord Commander much, anyway. "He has incredible levels of integrity," Harington said. "He can be quite confusing. I don’t understand him. he has a much greater sense of honor and duty and integrity than modern men, and me." Well, that's fair. Modern men (and men in GOT) are, across the board, terrible. (Just kidding.)

Apparently, the shoot required a total of 400 extras and 50 stuntmen, all out there in the freezing cold of Northern Ireland. So, as Minkovski wanted to know, is Harington ever bitter that he doesn't get to film any scenes in the Dornish lands or across the narrow sea like Khaleesi? "Their stuff isn’t a piece of cake either; filming in the searing heat of Morocco or Seville," he said. "Film work is not comfortable a lot of the time."

I guess if there's one thing that Jon Snow and Harington definitely have in common, it is that they are Very, Very Serious. He also revealed that he does not at all like to indulge in reading theories about the show, especially Jon's lineage. "My character doesn't know, so I don't want to know," he said. OK, killjoy. Best detail of all though: apparently that big old cloak smells like wet dog. Maybe that's why Jon Snow is really so sad all the time.