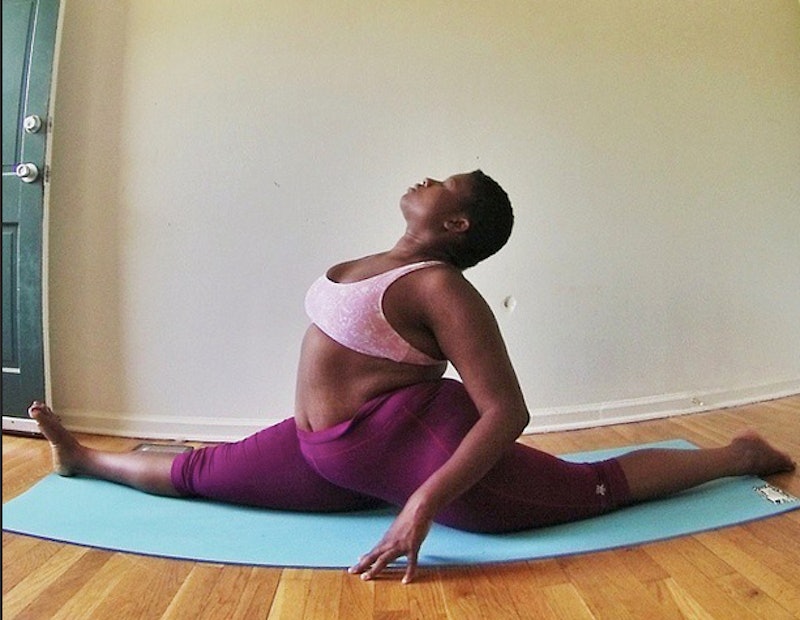 Yoga is really hard—for anyone. That's a solid truth pill to swallow before next examining further stipulations that may increase the difficulty of practicing on top of that inherent toughness regardless. It's easy to write the practice off as something simple and sleek, especially when we see dogs practicing yoga. Except it is a challenging workout—physically and mentally. The latter jumps enormously when you have a body that does not immediately aligning with what society first thinks of when they think of a "yoga body." As such, this plus-sized yoga instructor, 27-year-old Jessamyn Stanley, is an extreme badass and fortunately for us, she's got one hell of an Instagram to prove it.

Yoga is fundamentally supposed to be based in openness. It's a spiritual practice as much as a physical one. However, the perpetuation of ultra-lean supermodels set on a Bahamian beach in an advanced crow pose with nothing folding and zero lumps is warping that core concept that yoga is highly personal. In a glaring way, that insinuates women of a certain size are not allowed to practice (or worse still, not even capable of practicing) especially in a public way like Instagram. But Stanley flipped that theory into a very deep child's pose. Stanley calls herself a yoga enthusiast and fat femme, simultaneously challenging those far-from-universal yoga ideals bred from...less than zen things that happened. This Durham, N.C.-based instructor is one tough yoga babe, no question. Here's some evidence supporting that:

She doesn't sweat an audience

It seems this should be a no-brainer for anyone who makes a living demonstrating body things in front of other people, but Stanley takes that one step further. For one, she has zero issue with cameras all over. Also, she completely rocked Good Morning, America.

She's got style for miles

A Beavis and Butthead bathing suit paired with a middle finger to some snooty golf community? I wanna be her BFF.

She can let loose

I really respect when people can maintain a workable balance between healthy lifestyle choices and, well, donuts. Donuts are very important to me. Being real with being free with yourself is important. Stanley clearly gets that and I love that so hard.

She's a champion for inclusion

It's not like Stanley hates on thinner instructors or any person at all. She started practicing yoga in 2011 and started tracking her own progress via social media as a way to keep herself accountable. She says all bodies are beautiful—it's just about finding that little core of self-love and for some, that's through yoga. "Our society throws crazy shade at anyone whose body differs from the models featured in Western media," she said. "I always tell people (especially women) to stop sending negative energy into their bodies and thoughts. That negative energy is responsible for all body unhappiness. The only person in control of your life experience is you. Find the space and love to believe in yourself if only for your own overall well-being."