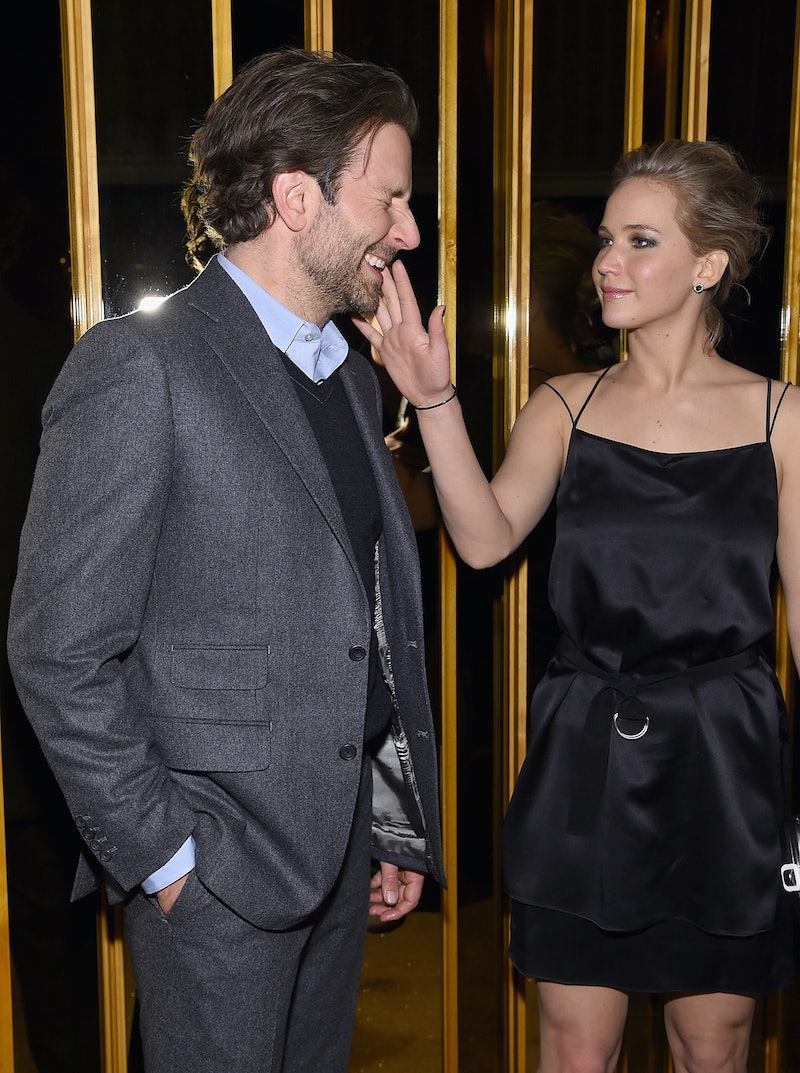 Jennifer Lawrence is everyone's dream best friend. Let's just get that out of the way. From her her brutal honesty about fame to her hilariously raunchy one-liners, Jennifer Lawrence is best friend goals personified. Her tremendous acting skills and killer fashion sense don't hurt her case, either. Understandably, since her friendship is in such high demand, only a select few people have been able to have the chance of growing to be close friends with her.

While she does have a non-famous BEST best friend, Laura Simpson, who has known her for eight years and was also her Oscars date in 2014, there are a few celebrities in the 24-year-old's life who have made the cut of getting to know the actress better than most. Oftentimes she meets them through the movies that they star in together, which is how she met noted friends Liam Hemsworth and Josh Hutcherson. And for this select group of folks, they know their friendship with her is for the long haul. So, let us take a moment to take a look at the lucky few who get to hang out and crack jokes with J. Law on a somewhat regular basis. And maybe get a little bit jealous of them, too.

These two became friends while they filmed the first Hunger Games movie, and they have been joined at the hip ever since. And Lawrence is not shy about bragging about him. "I guess the thing that surprised me is that I would never expect to ever have a man this good-looking ever be my best friend," she told Nylon. "I just would never assume those things could happen, but he is. He's the most wonderful, lovable, family-oriented, sweet, hilarious, amazing guy." Aww!

Lawrence and Cooper are so close after starring in so many movies together that Lawrence has officially claimed Cooper as her "work husband." She was quick to add in an interview with Elle that there is "no sex" between them, which is the secret to making their "work marriage" work. Considering how successful their movies have been, it seems like their union has been mostly smooth sailing so far!

Much like her friendship with Hemsworth, the actress became close friends with Hutcherson while filming The Hunger Games. Off-screen, their tight bond is obvious to anyone who sees it, whether it is her commenting on his baby pictures or them randomly acting out When Harry Met Sally scenes together. A friendship highlight? When Lawrence revealed the best part about filming Catching Fire with him during a Hunger Games panel: "We could run into the ocean and pee together." Hey, if you can make it through that, you can make it through anything!

Earlier this year, Redmaye revealed that he was BFF status with Lawrence after meeting the star two years ago at the BAFTAs. When she later found out he was was sick at the event, she told him, in true Lawrence fashion, "I wish you would have told me. I would have taken pictures!" The two later bonded over a shared love of food and television shows, specifically The Real Housewives. All the makings of a solid friendship!

So, who will Lawrence befriend in the future? Take a look at her list of upcoming projects, because chances are, she'll meet her next BFF on set.

More like this
Keke Palmer Paid Tribute To "Other Half" Darius Daulton After Announcing Pregnancy
By Jake Viswanath
Jodie Turner-Smith & Joshua Jackson's Relationship Timeline Includes Her Proposing
By Jake Viswanath
J.Lo Wants To Make A Sequel To This Movie With Ben Affleck
By Jake Viswanath
Yes, That's Lindsay Lohan's Sister Singing In The 'Falling For Christmas' Movie
By Radhika Menon
Get Even More From Bustle — Sign Up For The Newsletter