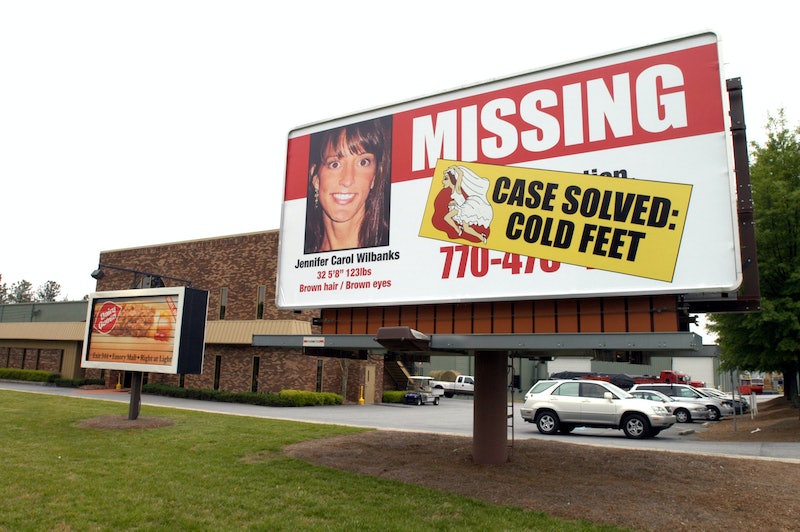 Sometimes, it's hard to keep all the bizarre, sensationalist interludes in the news straight. Since the rise of the 24-hour news channel in the late '90s, we've gotten familiar with so many random stories, surprising scenes, and pseudo-scandals — who could forget the infamous balloon boy hoax? Well, one such example just marked a ten-year anniversary: whatever happened to the 2005 "Runaway Bride," Jennifer Wilbanks?

I'm not talking about the poorly received Julia Roberts/Richard Gere film, either, although its title is now inextricably linked to this bizarre, sad, and rather disturbing story. Basically, on April 26, 2005, 32-year-old Georgia native Jennifer Wilbanks was soon to be wed to her fiancé, John Mason, when she found herself urgently needing to get away. Rather than call it off, or postpone it, or do any of the things you might think to, however, Wilbanks fled — she disappeared after going out for an evening jog, and Mason filed a missing person report than embroiled the whole city of Duluth in a costly search for her.

According to Today, the Gwinnett Sheriff's Department's search for Wilbanks set them back $60,000, which was an awfully hefty sum considering what had actually happened to her: she hopped a Greyhound bus and escaped to Albuquerque, New Mexico, in a state of some considerable distress.

This is where things get a whole lot less pleasant. Upon arriving in Albuquerque on April 29, Wilbanks placed a call to Mason on a pay phone. As detailed by The New York Times, she told him a false abduction story, claiming that a "Hispanic man" and his white female accomplice had kidnapped her in a van and released her four days later, half a country away.

Her racially-loaded invocation of a Hispanic kidnapper drew particular commentary and controversy after the hoax was revealed. The whole thing didn't hold up when things got more serious, however in spite of Wilbanks' extensive level of detail. According to CBS News, she claimed that she'd been sexually assaulted by both of her kidnappers, and that she remembered hearing Spanish music playing over the van's radio. But this story crumbled once the FBI got involved, and she confessed to investigators that she'd fled Georgia of her own volition.

On June 2, 2005, Wilbanks pleaded no contest on charges over the abduction hoax, according to the AP, although she got off pretty easy in the final tally — she had to pay the Gwinnett Sheriff's Department just a fraction of what they spent searching for her, and she got two years probation. She sued her former fiancé for half a million dollars in 2006, partially over a book it was rumored Mason was writing, although the lawsuit was ultimately dropped and the book never appeared, either.

As Today details, both Mason and Wilbanks ended up finding happiness with other people. Mason married a woman named Shelley Martin in 2008, and in 2010, Wilbanks was gushing about her new relationship on Facebook: "Everybody needs someone to love … I’m so glad I have that someone!" Not much has been heard of her since then, but rest assured, her story won't soon be forgotten. After all, when you've had your name slapped across bottles of hot sauce and seen a musical inspired by you, you know you've really made it.

More like this
A New Netflix Doc Will Explore The Unsolved Murder Of Jill Dando
By Sam Ramsden
This First Look At 'The Gold' Shows Jack Lowden In A Whole New Light
By El Hunt and Sam Ramsden
This Is When Netflix Is Going To Start Charging You For Sharing Passwords
By Darshita Goyal
6 Organizations Fighting Police Brutality That You Can Support Right Now
By Syeda Khaula Saad and JR Thorpe
Get Even More From Bustle — Sign Up For The Newsletter
From hair trends to relationship advice, our daily newsletter has everything you need to sound like a person who’s on TikTok, even if you aren’t.