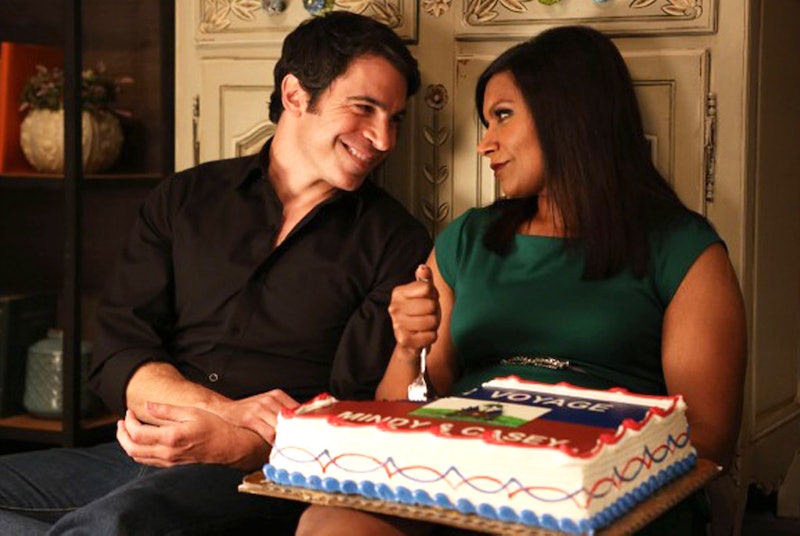 Sam and Diane, Ross and Rachel (though Chandler and Monica were so much better), Jim and Pam — if there's one sitcom trope that's persisted through the ages, it's the will-they-won't-they sexual tension. The Mindy Project's Danny and Mindy are one of those WTWTs floating around the sitcom verse at the moment, which is why Mindy Kaling's recent comments on Danny and Mindy are pretty notable. 'Cause she's saying they may not be meant-to-be.

Here's what she said about Danny and Mindy in an interview with TVLine:

It’s not like Danny and Mindy are Jim and Pam, where they are destined to be together because they’re each other’s true loves and soulmates. Danny and Mindy are very, very spiky, dynamic, prickly people who are older than Jim and Pam and are more set in their ways. So if we move in that direction, it’ll be interesting, but it doesn’t have to be permanent. If Jim and Pam got together, it would be traumatizing to viewers to have them split up or for there to be infidelity, because they were such an idealized, very romantic romance… Danny and Mindy are not.

Much as we want to see Chris Messina's curmudgeonly Danny Castellano give in to his obvious attraction for Kaling's poppy Mindy Lahiri, Kaling has a point. We'd beg to differ with her assertion a little later in the interview that the electricity between Danny and Mindy is just their "deepening friendship," but as for what she said about the relationship going forward (“I’m not even 100 percent sure that they should be a romantic couple”), well, that one got us thinking.

The will-they-won't-they friendship-turned-couple is, as we mentioned, one of the most well-known in the books. Most sitcoms try to go "endgame" with it (Ross and Rachel, Jim and Pam) and get the pair together for a happily-ever-after scenario at least by the show's finale — but there are other shows that play around with whether to romantically consummate the the relationship within the show.

More recently the "going there" side of the argument has been witnessed via camp New Girl, which got Nick and Jess together at the end of last season, but it is also notable that the showrunners have talked multiple times about the various ways in which the relationship could easily (read: will, probably during a sweeps week) blow up in their faces.

Since it's always such a thing, here's a quick list of the pros and cons of getting your television characters out of the proverbial "friendzone":

The thing to remember here is that it's not all about Ross and Rachel, and it's not all about Nick and Jess. Ben and Leslie in Parks and Rec had a will-they-won't-they storyline for a while — they had the tortured lusting-from-afar, they had the break-up, etc. What makes them so beloved as a TV couple is that the writers really got the characters and their dynamic — they understood the line at which it would be disingenuous for them to not give in to the happiness that was right in front of them.

On the flip side of that is Community, which set up a will-they-won't-they with Jeff and Britta in Season 1, had them sleep together, and then made sure the audience knew that they knew that these two would in many ways be a complete and utter disaster together.

This is where knowing your characters really damn well comes in handy. Would Mindy and/or Danny ever make a move on the other? They're both the type to have exhibited truly horrid decision-making in the past, so we're guessing... probably. This means they should probably smash faces at some point, too. But should they get married? That is entirely up for debate. C'est la television.