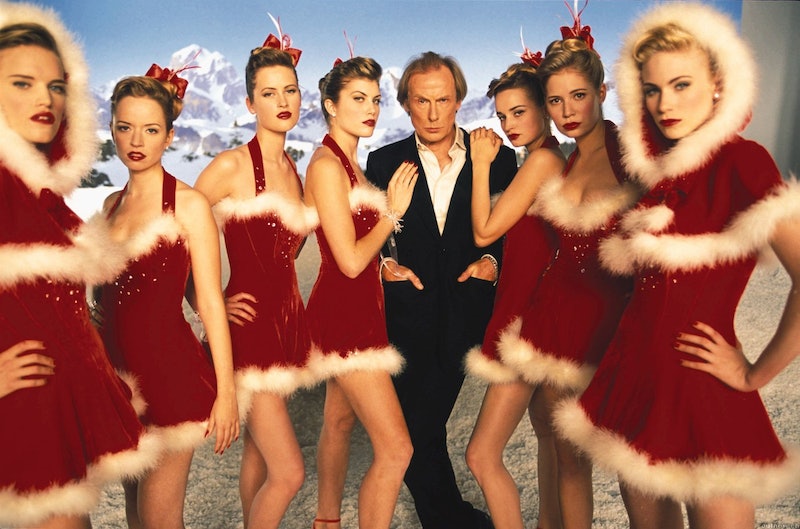 This year, Love Actually turns ten. Despite making us feel very old, it's also incredible how well the holiday flick has held up over the past decade, and how many lessons we've garnered about love, life, relationship, and sex from the flick. To celebrate ten years of Love Actually, here's ten love lessons we've picked up from our favorite holiday film.

It's possibly the most frustrating scene in any romantic movie ever. You know exactly what I'm referring to, when Sarah finally brings home the super sexy and Brazilian Karl, only to have their naughty time interrupted when her phone rings and she PICKS UP. No offense to Laura Linney, she's a saucy minx herself, but have you seen Rodrigo Santoro? I mean have you really taken a good look at those tanned biceps and that luscious head of hair? Have you?! Moral of the story: Cell phones do not belong in the bedroom. This includes text messages and phone calls alike. Because as Karl can attest, it's one giant boner kill.

As Westley said in The Princess Bride, "Death cannot stop true love." While we're not sure about that, one thing is certain: If your maid/house keeper is a smoking hot Portuguese woman with zero comprehension of the English language, it ain't no thang. If the sexual tension is there, and if she risks her health for you by jumping into a swampy lake, she's probably into it, and you should probably get off your ass and learn Portuguese to woo her. Basically, there are millions of people in the world, and your soul mate (if you believe in such a thing) might not speak the same language as you, but that doesn't matter, as long as you're both willing to learn the language of love.

3. Accents will get you laid

Specifically, her tear-jerking track, "Both Sides of Now" will help you grieve and move on from a lost love. There, there, Emma Thompson.

5. Also knowing how to play an instrument, that will get you laid, too

6. Relationships are temporary, but friends are forever

It's easy to take your friends for granted. They're always there for you, you do everything together, and you practically are an extension of each other. And while romantic relationships can be fleeting, friends — the ones worth having — are forever.

7. If your girlfriend is screwing your brother, you're probably better off without either of them

This is just one of those "seems obvious" rules that is hard to swallow if you're actually ever present in a similar situation. A girl or boy who is taking advantage of you, and a sibling (even worse) who is also using you, is better cut out of your life, at least for the time being. And who knows, maybe when you go to blow off some steam and write that magnum opus, that housekeeper you hired will turn out to be the love of your life. Fingers crossed!

The adorable yet awkward scenes featuring Martin Freeman and "Just Judy" were cut out of many network's holiday broadcast of the show for obvious reasons. But these characters, although rarely clothed or standing upright, want to find love as much as the rest of us! And they get nervous and fidgety when they want to ask someone out too, dammit!

9. If you're in love with your best friend's wife, don't keep creepy, close-up footage of her hidden in your house

I mean, this is a no brainer, right?

More like this
The Strange, Sad, & Hilarious History Of Online Dating
By Samantha Cole
'Love Island's Gemma & Luca Have Very Different Ideas About Their Break Up
By Frances Stewart and Sophie McEvoy
How To Have A Hometown Hookup Without Catching Feelings
By Lexi Inks
Lewis Capaldi Has Been Hilariously Candid About His Time On Dating Apps
By El Hunt
Get Even More From Bustle — Sign Up For The Newsletter