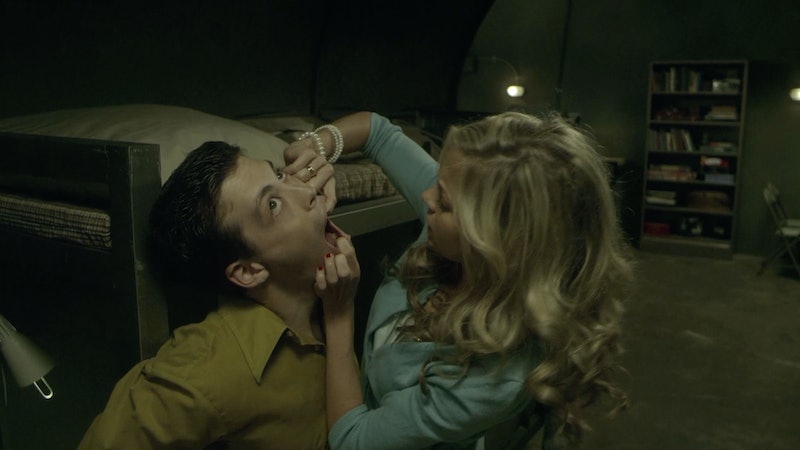 What do you get when you combine teen drama, cold war paranoia, slapstick, Agatha Christie, and… vampires? Red Scare , a new web series that asks, “How would 1950s stereotypes react to finding themselves in a fallout shelter with an undead neck-biter?” and then answers that question. A Soviet air raid forces eight basketball game attendees — some strangers, some not — into a nearby bunker to ride out whatever's going on outside. A lot of them don't get along, especially in a confined space. And that sucks ENOUGH before people start dying, and the word “vampire” enters the conversation. Tensions and violence mount. As is the case in both life and serialized television, shit just keeps getting worse.

Created by Sam Roberts and Tom Keenan, the series has already aired five of eight installments — episodes in which June Cleaver-esque housewives have gotten drunk, stand-up guys have been KILLED, and all sorts of fun '50s slang (“Fishsticks!”) has been used. Today sees the release of episode six, "Fallout," in which — well, just see for yourself. Or BETTER YET, start with the pilot episode below to watch this series with the studied focus of a real TV connoisseur!

One thing that really sets Red Scare apart is its abundance of strong female characters — a welcome respite from a web series landscape that is woefully dude-centric. A lot of the women are, you know, killed over the course of these eight episodes. But before they meet their untimely demise, these '50s ladies are subverting stereotypes (June Cleaver's not what you think she is... ) and doing their own thing (Teresa Decher's beatnik Judy, in a standout performance). Come for the vampire intrigue; stay for the Joss Whedon-esque female empowerment!

With just two episodes left, there's no time like RIGHT NOW to hop on the Red Scare train and introduce all your friends to something most assuredly not a waste of their time. Don't you want to be ahead of this thing? Of course you do! If the threat of vampirism offers one life lesson, it's that time is short and we should watch cool stuff while we can.