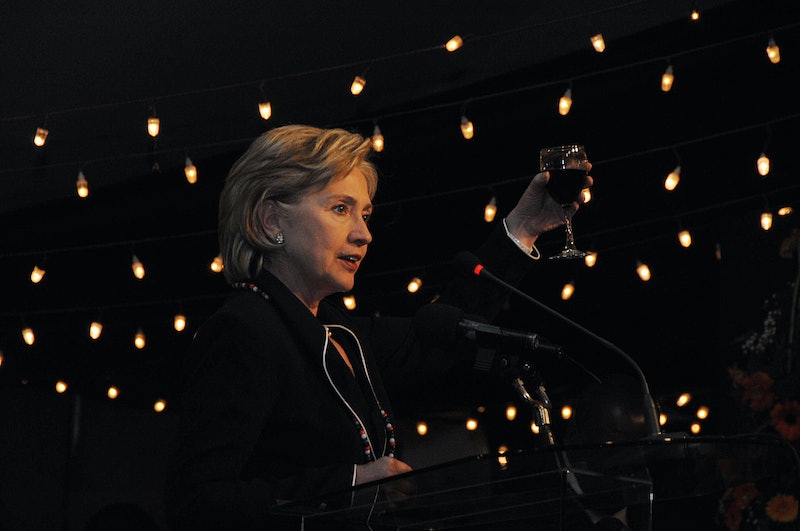 Former Secretary of State and 2016 Democratic presidential hopeful Hillary Clinton isn't like all the other moms — she's a cool mom. I don't know if she would let you drink in the house, but she has challenged other politicians to drinking games and even helped invent some pretty amazing alcohol-infused foods. There are a whole collection of great stories about Hillary Clinton and booze that will impress and shock you.

Generally, Clinton knows what she's doing when it comes to booze and food. She puts Tabasco sauce on everything, according to The Wall Street Journal; she has had a chocolate chip cookie recipe published in Good Housekeeping; and she likes to drink, so much so that a The New York Times reporter said the press thought she was just taking shots to pander to voters in Pennsylvania during the campaign in 2008, according to ABC News. Is drinking your way onto a ballot really a thing? If it was, Clinton might be able to do it. A photo of Clinton drinking in Cartagena, Colombia, even went viral in 2012, just after the Tumblr Texts From Hillary, which featured funny memes of Clinton texting, also spread across the web. President Barack Obama joked about it in his speech at the 2012 White House Correspondents' Dinner:

Despite many obstacles, much has changed during my time in office. Four years ago, I was locked in a brutal primary battle with Hillary Clinton. Four years later she won't stop drunk-texting me from Cartagena.

Here are three of the best stories about Clinton and alcohol to get you one step closer to the weekend:

She Beat John McCain At A Drinking Game

In 2004, Clinton and Arizona Sen. John McCain, a Republican, went on a congressional tour of Estonia, according to The Telegraph. According to Dimitri Demjanov, owner of the restaurant where McCain and Clinton were seen, the two began a drinking game. He said they both managed to do four shots before Clinton was declared the winner. Though Demjanov refused to specify the terms of the game, he didn't hesitate when the Telegraph asked him who the winner was:

Hillary won. She stayed correct after four shots. And John McCain too.

The game was later confirmed when Terry McAuliffe, Clinton's campaign manager at the time, said in an interview with the BBC that Clinton had "beaten" McCain in the drinking contest.

Ten years ago, then-Sen. Clinton organized a showcase of New York farm products, according to Syracuse.com. There were booths set up for each of the farmers, and Clinton placed the grape growers next to the ice cream people, but she didn't think anything of the choice. But then, during a talk at Hamilton College, she said something magical happened, according to Syracuse:

Some of our Farm Day guests started pouring their samples of New York wine into their cups of Mercer's ice cream and they loved it. And they kept trying new kinds of wine with different kinds of ice cream.

Roxaina Hurlburt and niece Ruth Mignerey, owners of Mercer's Dairy in Boonville, which was placed next to the wine people at Farm Day, decided to start testing the fruits of Clinton's serendipitous choice. Now, the pair is in charge of the world's only commercially distributed ice cream mixed with wine. Clinton helped connect Mercer's Dairy with new markets while also accidentally creating one of the greatest foods known to humankind.

There Was A "Victory" Wine Made To Encourage Her To Run