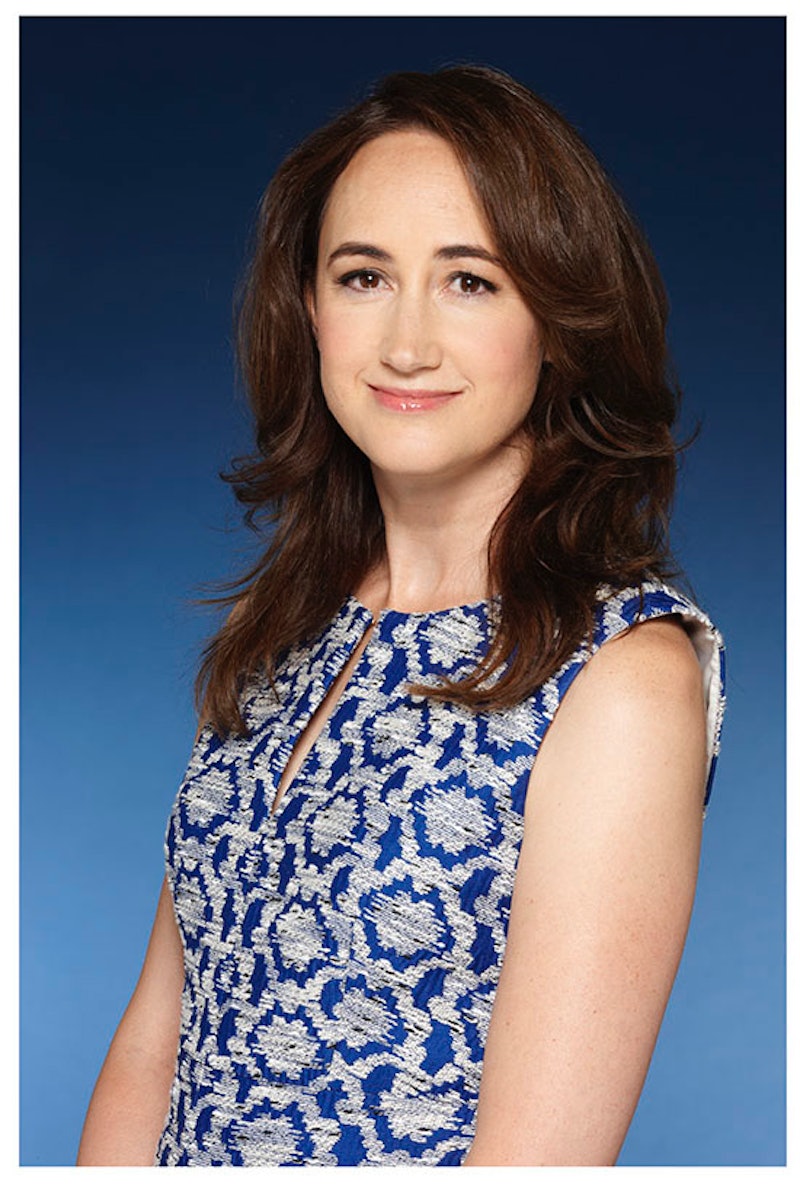 Sophie Kinsella has been tearing it up in the publishing world since 1999's — yes, 1999, I know — Confessions of a Shopaholic, but she has never released a young adult novel until this June. Kinsella's YA debut Finding Audrey puts 14-year-old Audrey in the starring Becky Bloomwood role. Bustle had a chance to chat with Kinsella about her new book, her characters, and why everyone will be able to fall in love with Audrey.

In the aftermath of a bullying incident in school, Audrey has retreated into herself and is buried by social anxiety, hiding behind sunglasses and avoiding any contact with people outside her family. She sees a therapist named Dr. Sarah who encourages her to film her own life, make a documentary to find her way closer to people. In the meantime, her gamer older brother becomes so obsessed with a computer game that their mother becomes equally obsessed with finding him other activities to spend his time. But the computer game has brought a positive force into Audrey's life: Her brother's friend Linus, who is patient and kind with anxiety-ridden Audrey, passing her notes to have a conversation.

It's not just a love story, however. Kinsella manages to make Audrey's family both over-the-top and completely relatable. You just have to read the first few pages to see that. The book opens with Audrey's mother, completely at her wit's end, holding her brother's computer out the second story window, creating a scene that draws all the neighbors to their front lawn. I challenge you not to laugh out loud (and maybe also look a little crazy if you're in public.)

There are swoons, hilarity, and also a great dose of truth surrounding social pressures in high school, anxiety, and the repercussions of bullying. You'll find yourself tearing up, flipping to another page and laughing out loud — which I suppose is as true to real life as anything.

BUSTLE: Things that tend to be vilified by older generations—especially video games and even Starbucks—have a way of helping characters heal and even come together as friends and family in the story. And this is even with hilarious outrage/worry from Mrs. Turner. What did you want to show or tell readers by making these things a part of the story?

SOPHIE KINSELLA: Obsessions have always been a part of my writing, and I love giving obsessional traits to my characters. Everyone has flaws and goes through issues in real life, and I like to reflect that in my writing. Anne may not understand Frank’s obsession with computer games, but Frank doesn’t understand his mum’s obsession with the Daily Mail! This book is all about realizing that other people and family members have points of views, too.

This book is all about realizing that other people and family members have points of views, too.

Spoiler alert! You never reveal what exactly happened to Audrey. What was the reason behind this narrative choice?

I did consider revealing what happened to Audrey — but then decided against. I feel strongly that if you start to think “This event caused this reaction and was responsible for Audrey’s condition,” you actually relate less to Audrey’s predicament. So many teenagers these days suffer from anxiety, I wanted them to be able to relate to Audrey and not feel, “I didn’t have that event happen to me so I’m not like her.” It is also the case, as Audrey says in the book, that some things should be kept private; they’re not for sharing. I want readers who are suffering from anxiety like Audrey to feel that they don’t have to share everything. It’s important for some things to remain private.

Audrey’s documentary appears in the book as scenes. How do you think this helps tell your story?

Well, first of all, I just love the idea of Audrey doing a fly-on-the-wall documentary! But from a more technical viewpoint, the documentary provides another perspective. I love the direct feel of the first-person narrative, but it’s also refreshing to step back and watch the action from a slight distance.

Overall, what do you hope younger readers (and even older ones!) take away from Finding Audrey?

I hope readers enjoy the book, and I hope they find it funny. I also hope that the darker moments give everyone something to think about, both young adult readers and their parents. I really think it’s a book for everyone.