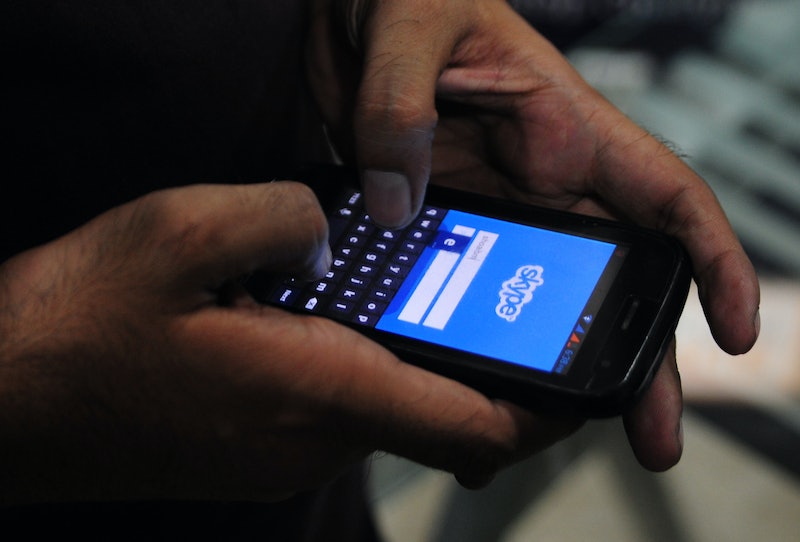 There's a bug going around, and it's pretty contagious. After a specific string of characters made iPhone Messages crash last week, the same thing is now happening on Skype: A bug caused Skype to crash after receiving a certain message on Windows, Android, and iOS (Mac computers seem to be safe). Skype has now fixed the problem, which was first reported on its community forum Tuesday, where a user warned others that sending "http://:" without quotes will crash Skype. Once the message crashed the app, it will continue to crash every time you try to reopen it. Annoying, right?

Last week, iPhone's messaging app was crashing every time it received a particular eight Arabic characters, preventing the phone from receiving incoming texts and causing the phone to completely reboot in some cases. An iPhone user posted the weird issue on Reddit and it quickly became a cruel way for people to mess with their friends. The problem was that the Arabic text included Unicode that Apple's iOS didn't know how to deal with. Apple published a quick fix that entailed asking Siri to read all unread messages and reply to the problematic text. If the problem continued, Apple said to delete the message, which, you know, you should probably do anyway.

Skype was quick to respond to and fix its problem, releasing new updates the next day. Skype acknowledged its bug in a community blog post Wednesday, writing: "We are aware of a problem that was causing Skype clients to crash. Our engineering teams worked hard to resolve this issue, and have released updates for all impacted Skype platforms."

The new updates are now available and upgrading to Skype 7.5 for Windows, 5.13 for iOS, and 5.4 for Android should fix the problem. Although Skype for Mac wasn't affected, the updated Skype 7.7 for Mac is also available just in case.

What's going to get the bug next — WhatsApp? Facebook? Tinder? This problem seems to be essentially the flu of the tech world, but there's no preventative shot. At least the issue with Skype is less problematic because who even uses Skype for messaging (or at all) anymore? As long as you're texting and messaging normally, you shouldn't have a problem, but beware of your "funny" friends who might still try to crash your apps.