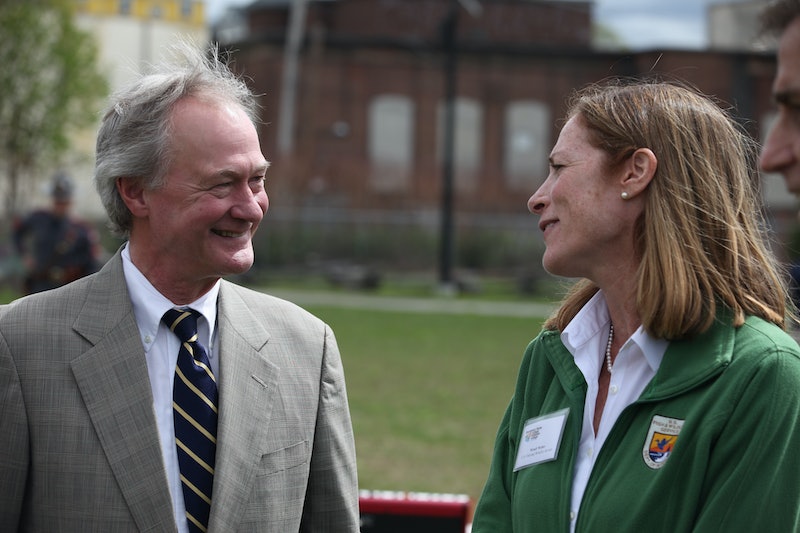 The 2016 presidential hopeful pool for Democrats is slowly getting bigger, but it's definitely not rivaling the huge number of Republican hopefuls. Former Rhode Island Gov. Lincoln Chafee was the most recent Democrat to announce his candidacy for president Wednesday afternoon. His placement with the Democrats is a little strange, though, given his history as a Republican during his time in the U.S. Senate. But the Republican-turned-Independent-turned-Democrat seems to be happily situation among social liberals. Chafee's views on same-sex marriage were actually some of the first to openly embrace marriage equality, according to an op-ed he wrote for The New York Times.

Chafee's op-ed, called "Why I Am Signing Marriage Equality Into Law," was written during his term as governor when he signed the Marriage Equality Act into law in Rhode Island. He said the moment was gratifying because he was one of the first Republican senators to defend marriage equality in 2004, just two years before his party colleagues scheduled a vote on a constitutional amendment to ban gay marriage. Chafee was one of six Republicans who opposed the ban, but he was one of four members of the entire Senate to support "full marriage equality," meaning he specified full support instead of brushing it off as an issue best left to the states.

Chafee wrote that he was never impressed by arguments calling same-sex marriage a moral wrong. Rather, when he approached the issue, he saw it as an economic question about diversity and acceptance:

The point is not simply that we [Rhode Island] are welcoming to gay people, though we are. It is that we want to welcome everyone. The talented workers who are driving the new economy — young, educated and forward-looking — want to live in a place that reflects their values. They want diversity, not simply out of a sense of justice, but because diversity makes life more fun. Why would any state turn away the people who are most likely to create the economies of the 21st century?

Rhode Island was the 10th state to legalize gay marriage. Chafee has called the issue of marriage equality a "generational" one, instead of a geographical one. In an interview with SiriusXM OutQ after he signed Rhode Island's equality act, he said "states are just waking up," and they need to realize that the next generation of voters won't tolerate inequality, according to The Huffington Post:

If you’re going to grow your base, you’ve got to be inclusive. It’s immigrants, and now gay rights. It’s good, good for our country. It’s good to see the electorate responding in these states on various issues. ... It’s going to spread as younger people become a bigger and bigger voting block.

Chafee also voted in 2000 to support legislation that added sexual orientation, gender, and disability to the definition of a hate crime, according to On The Issues. He's also been called a "longtime supporter" of the LGBT community.

Chafee said he left the Republican party because it no longer supported a mindset that said, "Take care of the finances and stay away from my life," according to his interview with Sirius XM:

That changed to where [Republicans] were doing the opposite. We were getting fiscally irresponsible, giving tax breaks to the wealthy and at the same time getting more involved in people’s lives, whether on Roe vs. Wade or gay marriage. That was just a change in the party and I kept to the old values that the old Eisenhower and Rockefeller Republicans cared about: "We want black ink and we want the government to leave us alone."