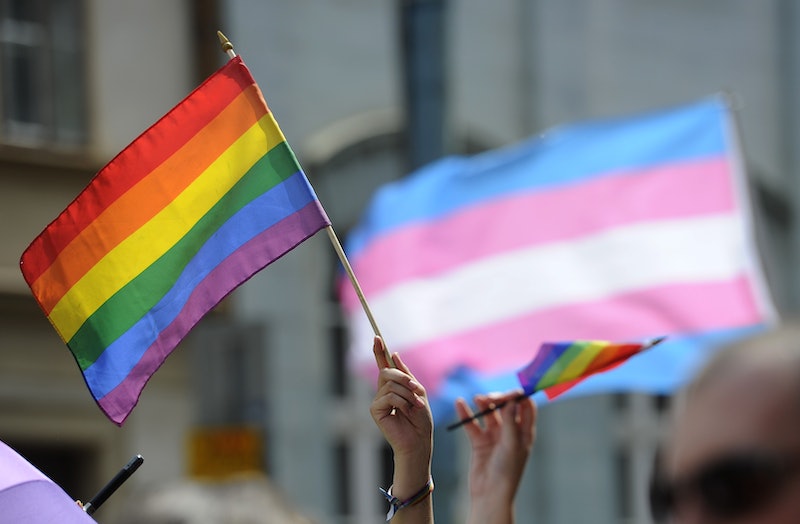 You may have heard of Sophia Hawes-Tingey last year, when she and her wife made headlines for being the first transgender women to legally marry in Utah, and once again, she's back in the news. Earlier this week, Sophia Hawes-Tingey became the first transgender person to run for office in Utah. In fact, if she wins, she could even be the first transgender person to be elected in the state.According to Jezebel, however, Hawes-Tingey would rather the focus stay off of her gender identity during her campaign for incumbent Paul Glover's Midvale city council seat. "I know to the LGBT community, they see this as a message of hope. But this is a race about community values," she told Fox 13 after announcing her intention to run. She went on to point out that in addition to being a transgender woman, she is also a software engineer, Navy veteran, and dancer. On the other hand, it's difficult to deny that her city council run is a sign of a larger trend toward LGBT equality in Utah, despite the state's reputation for conservative values. According to the Huffington Post, multiple LGBT advocacy groups, such as the Gay and Lesbian Victory Fund, have endorsed her campaign, and she joins three other openly LGBT candidates running for office in Utah this year.

The Huffington Post reports that Hawes-Tingey's campaign intends to emphasize "public safety, empowerment of marginalized communities, and environmental stewardship." As for her opponent, Glover has been nothing but polite so far, saying that he respects her lifestyle and the campaign is about "what [he] can do for Midvale or what she can do for Midvale," rather than her gender identity. Considering that the United States doesn't have a history of treating transgender people well, who knew local politics could be so respectful? I have to admit, I was expecting to have to use this gif at some point for the article:

More like this
The 19 Best Tweets & Memes About Bisexual Awareness Week
By Lexi Inks
An Honest Review of MeUndies Boxers, According To A Non-Binary Person
By Megan Lasher
Pro Footballer Zander Murray Is "Blown Away" By Support After Coming Out
By Sam Ramsden
Chris Kaba's Family Continue Fight For Justice After Viewing Police Bodycam Footage
By Sophie McEvoy
Get Even More From Bustle — Sign Up For The Newsletter