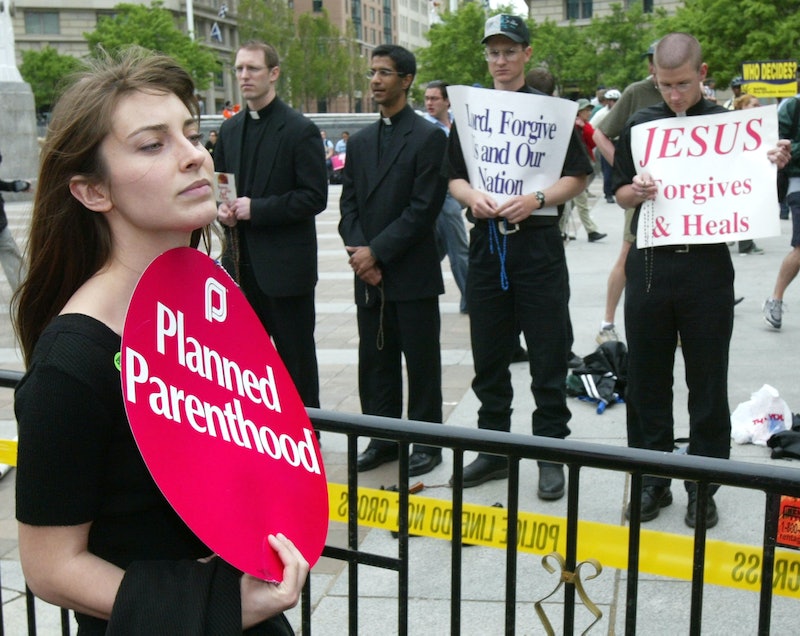 As we speak, Wisconsin is trying to sneak a really atrocious 20-week abortion ban through its legislature. The state is attempting to up the usual 20-week ban without exceptions for rape and incest with a provision that would allow "fathers" to sue for emotional distress in the event of an abortion, because abortions hurt manfeels. Scott Walker has already announced that he's totally up for it, which comes as no surprise to anyone who's observed the state's demonic governor, he of "transvaginal ultrasounds are cool," in action. He may want to reconsider his gung-ho approach to bans on so-called partial birth abortions, though, because there's no real evidence to support the claim that they reduce abortions — and in fact, they may increase them.

With yet another version of the Pain-Capable Unborn Child Protection Act (admire that brilliant abuse of rhetoric, my friends) circulating on the hill and raising the specter of a federal abortion ban, 20-week bans are hot news. As well they should be, because a growing number of states are proposing to pick them up, and that's in addition to the 11 that already have them, despite legal challenges. People in need of abortions are facing a shrinking number of options when it comes to accessing them.

Here's the interesting thing, though: Opponents to bodily autonomy claim that 20-week bans save precious unborn babies and draw upon outlandish and scientifically un-based claims that fetuses are capable of feeling pain. Additionally, as the National Organization for Women points out, these kinds of bans actually often involve fetuses that aren't even viable, belying the claim that restrictions on abortion are supposed to protect fetuses that could survive outside the womb. But in fact, such bans may do just the opposite of saving "lives," driving abortion rates up by limiting freedom of choice.

We all know these claims about protecting life are a line of hokum: the real goal here is to remind people with the capacity for getting pregnant of their subordinate place in society by denying them fundamental control over their own bodies. We're all perfectly aware that if cis men — the people writing this legislation — could get pregnant, no one would be floating the idea of 20-week bans, which really are unconstitutional, no matter what Republicans think.

The reasons behind a possible 20-week ban-triggered increase in abortions are complex. It's worth noting that conservatives usually like to float the idea that people only pursue abortions past 20 weeks in the case of rape or incest — and in his support for the bill, Walker claims that people really think about abortion in "the initial months" of pregnancy, so they have plenty of time to seek procedures for pregnancies resulting from rape or incest. (Because obviously they never have conflicted emotions or want time to make informed decisions without pressure.)

But in fact, most abortions after 20 weeks (which, by the way, account for 1.2 percent of abortions in the U.S.) occur for a few really tragic reasons: Serious threats to the pregnant person's health, fetal anomalies that are either incompatible with life, or congenital conditions so severe that an infant will live a really brief and agonizing life. In these cases, the pregnancies are usually wanted, whether planned or spontaneous, and parents are gutted by these fetal diagnoses and the tough choices they're faced with. This is a society that's very reluctant to talk about the personal and social costs of terminating a wanted pregnancy, though, which forces these parents into silence.

One advantage of living in a civilized country where abortion rights are not restricted is that parents have access to three things: Time, additional opinions, and resources. The importance of time when making these kinds of decisions really can't be overstated, because it's emotionally traumatic to be flooded with negative information about a pregnancy — and in many cases, these kinds of congenital conditions or significant pregnancy risks actually can't even be identified until around 20 weeks, so patients are slammed with them right at the cutoff point proposed in these bills. This amazing offer won't last long, so act now, folks.

When you're facing down a ticking clock, you're looking at two pretty bad options: One, carry the pregnancy to term and hope there aren't complications (and, if there are, that you live in a state with exceptions for the health of the pregnant person), or, two, get an abortion and spend the rest of your life wondering if it was the right choice.

As we recently saw in an episode of Grey's Anatomy (and yes I'm going to name-check my favorite guilty pleasure), diagnosing congenital health conditions is complicated. April and Jackson struggle with a diagnosis of brittle bone disease because there are many different forms of osteogenesis imperfecta, and you need some further information to figure out which type a fetus has.

You also have access to resources. Like, for example, organizations that connect expecting parents with information about disabilities and fetal diagnoses. To borrow from Shondaland again, there are lots of folks out there living with brittle bone disease who do just fine and enjoy happy, rich, full lives — check out disabled comedian Lisa Egan for example. Without connecting with those people, parents have no real way to find out what the lives of real-world people with congenital conditions are like, and when crunched for time, that can push them into opting for abortion.

But when you're facing down a ticking clock, you're looking at two pretty bad options: One, carry the pregnancy to term and hope there aren't complications (and, if there are, that you live in a state with exceptions for the health of the pregnant person), or, two, get an abortion and spend the rest of your life wondering if it was the right choice. Guess which choice many people pursue.

If you want to put a stop to abortion, provide people with the opportunity to make informed choices about their options.

Given the extremely small percentage of people facing this decision in the first place, this likely won't contribute to a huge jump in statistics, but it does raise some tough questions for conservatives who claim to be on a quest to eliminate abortion. If you want to put a stop to abortion, provide people with the opportunity to make informed choices about their options. Provide people with access to family planning services.

The decision to deny both of those things is a telling testimony to what 20-week bans are really about: Exerting control in a horrific and chilling display of power and social dominance. It's even more chilling that the left is talking about how to "compromise" on abortion, like there's somehow a middle ground between conservative extremism and full bodily autonomy that's acceptable.

Scott Walker and his ilk have no intention of stopping at 20-week bans, and neither should we. Abortion on demand and without apology isn't too much to ask for, and if we don't get on it, reproductive rights in this country will be forever compromised. Forget safe, legal, and rare: We need safe and legal, period. Even now, we're facing down a Supreme Court discussion this term that could be the next Roe v. Wade, so wake up, America. Scott Walker and yet another entry in the 20-week ban ledger may be the least of our problems.