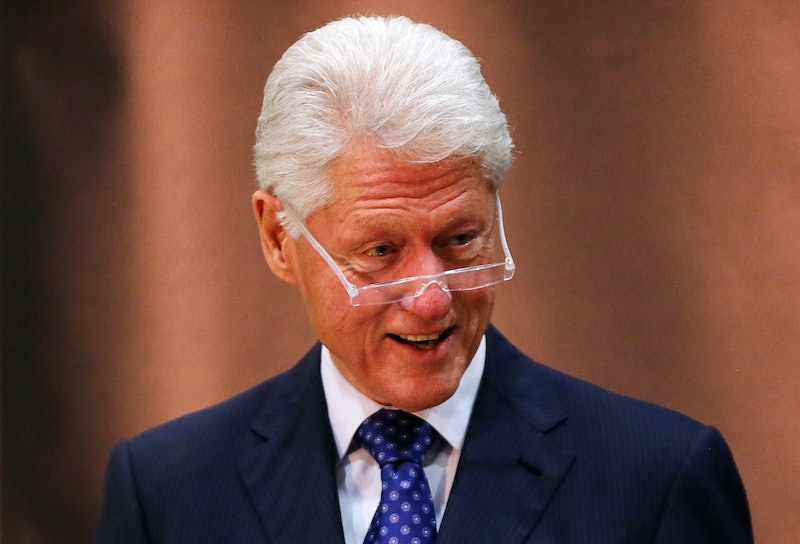 It should come as no great surprise that former President Bill Clinton is a feminist. I mean, he’s married to the woman who could be the first female President of the United States. But it’s a label that he’s earned in his own right, too. While he was in office, President Clinton made unparalleled strides for women: just two weeks into his first term, he signed the Family and Medical Leave Act, allowing millions of women (and men) job protection after becoming parents or caring for family members.

In an op-ed for Politico on the 20th anniversary of the landmark legislation, Clinton estimated that 35 million Americans had taken advantage of FMLA by the time he left office and estimated that number had grown to 100 million by 2013. He also understood that the work he started with the FMLA was not yet finished. In that same op-ed, Clinton wrote, “Most advanced nations provide some form of paid family leave, and it’s helped, not hurt, their economies. A growing chorus is now working on how to make that dream a reality here, and they deserve our support.”

After signing the FMLA, President Clinton went on to sign the Violence Against Women Act and, of course, he introduced us all to the Notorious RBG.

With some polls placing as many as 60 percent of women voters in her corner, Hilary Clinton is a powerhouse in her own right, delivering a strong message to female voters. But, President Clinton — with his record on women’s rights and his work to promote gender equality and empowerment for the Clinton Foundation — could be the ideal surrogate during the campaign. Here are some of the best quotes from Clinton on women’s rights:

1. “It's time for the full participation of women & girls in all aspects of society. #NoCeilings”

President Clinton tweeted his support of the No Ceilings initiative of the Bill, Hillary & Chelsea Clinton Foundation. The project uses data to advocate for full participation of women and girls in education, economic issues, and human rights.

2. "The Government simply has no right to interfere with decisions that must be made by women of America to make the right choice.”

Back in 1992, then-Governor Clinton made this statement to The New York Times to clarify his position on abortion rights. That commitment played out in his 1996 veto of legislation to ban partial-birth abortion, when he issued a statement calling the procedure a “potentially life-saving, certainly health-saving" measure for "a small but extremely vulnerable group of women and families in this country, just a few hundred a year.”

3. "Most advanced nations provide some form of paid family leave, and it’s helped, not hurt, their economies. A growing chorus is now working on how to make that dream a reality here, and they deserve our support."

Clinton kicked his presidency off right and stressed the importance of parents being able to take protected family and medical leave by signing the FMLA as one of his first acts. He's continued to bring attention to the issue, even after leaving the White House.

4. "We also can't reward work and family unless men and women get equal pay for equal work."

Clinton also called for equal pay for women back in 2000 during his State of the Union address to Congress. Here's the rest of that quote:

Today the female unemployment rate is the lowest it has been in 46 years. Yet, women still only earn about 75 cents for every dollar men earn. We must do better, by providing the resources to enforce present equal pay laws, training more women for high-paying, high-tech jobs, and passing the "Paycheck Fairness Act."

5. "I hope we have a woman president in my lifetime, and I think it would be a good thing for the world as well as for America."

This might be the ultimate nod to President Clinton's feminist streak. According to a report by Agence France-Press, President Clinton told an audience in China two years ago that, while he didn't know whether his wife would run, he hoped to see a female president in his lifetime; the choice, however, would be hers to make.

More like this
Are John Legend & Kanye West Still Friends? The Singer’s Latest Update Is Candid
By Brad Witter
Christina Aguilera Took A Powerful Stand At Brighton Pride
By Sam Ramsden
We’ve All Had Bad Sex. Nona Willis Aronowitz Is Talking About It.
By Sophia Benoit
It’s Official: 'The Bachelorette' Is No Longer A Fairy Tale
By Samantha Allen
Get Even More From Bustle — Sign Up For The Newsletter