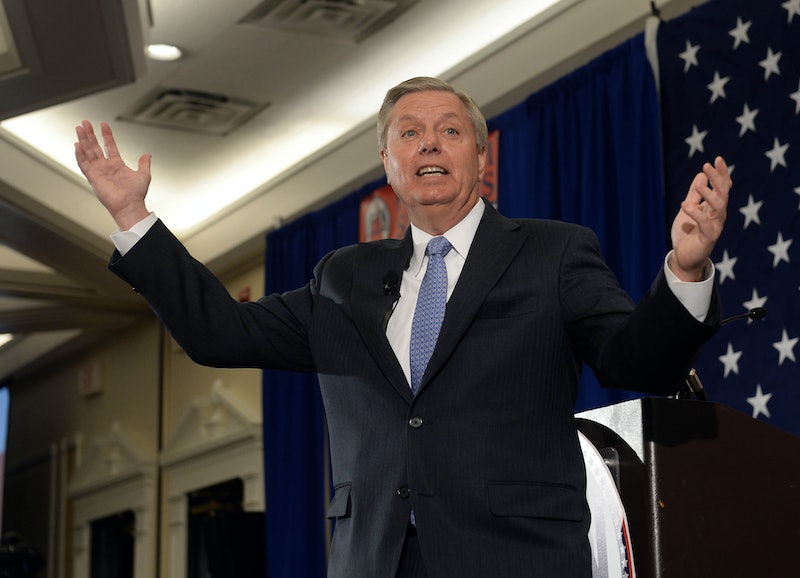 Ever since Lindsey Graham announced his candidacy this Monday, there has been speculation as to what would happen if a single, unmarried man is elected president. What will happen if there's no first spouse working diligently by Graham's side? Well, there's actually precedent for this, as two historic U.S. presidents were unmarried when they were elected. Although he's single and has never been married, Graham has previously been quoted on multiple occasions as saying that he still has a family and that his own self-acceptance should make his bachelor status a non-issue. Graham said in an interview with the Boston Herald:

I have family. I'm not married. The bottom line is, I'm OK with me. I think I've led a good life. The question for the country is, can I take care of your family?

Even in Graham's presidential campaign announcement, he makes mention of the strong bond he has with his family as well as their continued support. Although he is single, he says he isn't a self-made man. So, is it possible for Graham to secure the presidency without a partner? History says yes. Two previous presidents were sworn in without a partner. James Buchanan stands as the only president to never marry, while Grover Cleveland became president while unmarried and later tied the knot in the White House. Four other presidents took office as widowers, while three more lost their spouses while serving as commander in chief.

James Buchanan has been called one of the country's worst presidents by many, including the BBC and Nate Silver. Buchanan served just one term from 1857 to 1861, and his legacy was marked by high tensions leading up to the Civil War in which Buchanan appeared generally pro-slavery and found the issue to be a matter of state's rights over federal oversight. According to Biography.com, Buchanan also felt that, "while the states had no legal right to secede, the federal government had no right to prevent them." Even his official White House biography alludes to Buchanan appearing to give up after the foreshadowing of the Civil War gave a glimpse of what was to come.

Buchanan was engaged once but never married. His engagement to Ann Coleman in 1819 lasted less than a year. He was 28 at the time; Coleman died rather suddenly that same year. It was never revealed why Buchanan broke off the engagement, and Coleman's death is just ambiguous, though some speculate it was a suicide, according to Encyclopædia Britannica.

According to the History Channel, Cleveland is the only president to have his wedding ceremony in the White House. Cleveland served as president after Chester Arthur, a Republican who sadly lost his wife while in office. Cleveland's first term was 1885 to 1889, and it showcased the lengths he'd go to prevent government spending, a platform he'd established as governor of New York. It's a stance echoed by current candidate Graham, who tends to err on the frugal side when it comes to spending. Cleveland managed to snag a second presidential term in 1893 during a particularly severe economic depression. He was single for just one year of his presidency, marrying France Folsom in 1886.

Folsom was more than two decades younger than Cleveland. She had known him all her life due to her legal ward having worked with Cleveland. Folsom's father died when she was just 11, and her mother, Emma, was still alive and far closer in age to Cleveland than her 21-year-old daughter, thus she initially thought the proposal was meant for her. Cleveland showed his dedication to Francis over Emma by inviting the younger Folsom on a lengthy tour of Europe. Cleveland proposed in 1885, and they were married in the White House's Blue Room the very next year.

It's entirely possible for Graham to remain unmarried and enter the White House. For those curious about what Graham may do to fill the FLOTUS role without a partner, keep in mind that James Buchanan called upon his niece, Harriet Lane, for White House hosting duties, according to a Pittsburgh Post-Gazette profile on her. Graham continues to emphasize his close bond with his family, thus he is very likely to do the same if elected, perhaps calling upon his only sister, Darline Graham Nordone. His single status might even give Graham an upper hand when it comes to committing to a grueling campaigning schedule that requires being away from home for extended periods. Graham has no spousal or childcare obligations, thus his availability could spin the bachelor issue into a positive attribute — though why people are so concerned about spouses or no spouses is beyond me.