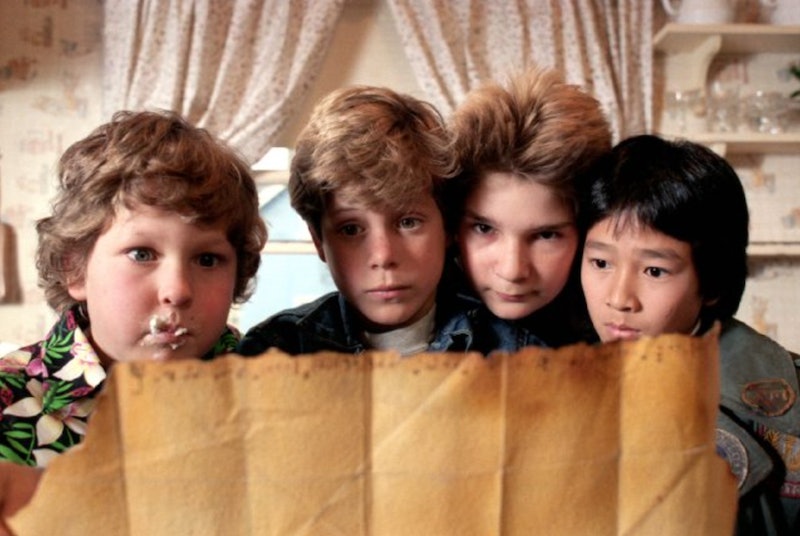 Goonies never say die! Think back to a long time ago, 1985 to be exact, and remember the first time you saw The Goonies and the awesomeness that ensued. From the Truffle Shuffle and Sloth to Booby Traps (That’s what I said!) and One-Eyed Willy, The Goonies has pretty much become an '80s kid’s staple movie. However, there are some moments that absolutely scared the pants off you back in the day. Don’t lie about it either because I am here to remind you of those moments you may have forgotten about, but are also kind of hilarious as an adult. The Goonies turns 30 years old today and we are honoring it by remembering its scariest moments. Yes, that’s right 30 freaking years ago Steven Spielberg introduced us to Mikey and the gang, which means we are officially old people, especially those who saw it in theaters. Sorry ‘bout it.

For the occasion, I gathered some friends to re-watch the movie. One friend was so freaked out by it as a kid she never sat through it and the other one, like me, had an older brother who watched it religiously, meaning we grew up as Goonies too. By the end of it, I think we successfully converted our friend to the dark side. Something else I have to mention before I get to the scariest moments though, someone explain to me why Troy and his football pals are bro-ing out at a wishing well (best realization ever). Now to the most terrifying moments…and there are quite a few.

For real though its literally the only time throughout the movie this Fratelli brother is scary.

When Ma Fratelli threatened to cut out their tongues for dinner, it hurt just thinking about it.

The First Time We See Sloth

The first time Mikey walks to the bathroom and finds Sloth chained to the wall there was literally nothing more terrifying. I know that we love Sloth and he truly is the hero in the movie, but that first glimpse…is the worst.

Dead Guy In The Freezer

Chunk finds ice cream in the freezer and of course, a frozen dead dude falls on him. His face haunted my dreams.

When The Fratelli’s Capture Chunk

The light in the car comes on and the scary Fratelli brother starts singing in Italian. Chunk screams, I scream.

Chunk’s hand was so close to getting chopped up in the blender, I couldn’t even watch the dramatic moment as a child. #traumatized

So that infestation of bats were clearly rubber bats on a string, but as a child I took those bats very seriously and learned that you don't mess with bats.

Data Almost Dying On The Spikes

Remember when Data saved himself from dying with a slinky and plastic teeth. It’s still cool today because how unrealistic, but the first time you saw it you didn't know if Data would make it out alive.

All of the Skeletons

So many skeletons. Everyone runs into skeletons everywhere. Also, Chester Copperpot is quite literally the worst explorer ever. He got owned by a bunch of children.