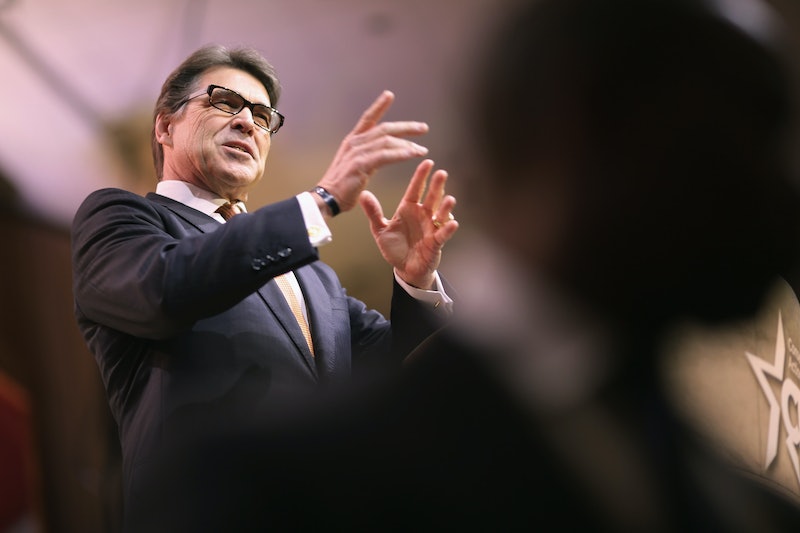 The already crowded Republican primary field just got a little more congested, with Rick Perry’s announcement Thursday that he’ll be entering the 2016 presidential race. The former Texas governor’s 2012 campaign bombed spectacularly after a poor showing (and occasionally outright embarrassing slip-ups) in the debates, but he’s clearly got a second wind. Whether the former Democrat — now staunch Republican — will be able to transcend the ignominy of his last campaign and make an impact in a race teeming with competitors remains to be seen. Immigration policy was a major sticking point for the contender in 2012, so where does Rick Perry stand on immigration now?

Perry’s current immigration approach, fleshed out in recent speeches and interviews but noticeably absent from his official website’s “Issues” page, is a surprisingly nuanced affair: on the one hand championing certain rights for undocumented immigrants, and on the other advocating strong border security. The former governor, whose tenure stretched across just over 14 years, from December 2000 to January 2015, has touted his hardline record on border control as a great success. The candidate’s website details that in the last five year of his governorship, the state of Texas appropriated almost $800 million for border security operations, “to fill in the gaps left by the federal government.” He has argued that border security is a federal obligation, and that immigration reform will not work until the border has been effectively contained.

Yet despite his emphasis on tightened border control, the issue of immigration helped to stall Perry’s last bid for president, due to his support for a 2001 Texas law that granted in-state tuition rates to illegal immigrant students at state universities. When he came under attack from Republican rivals, his defense of the stance was heated. “If you say that we should not educate children who have come into our state for no other reason than they've been brought there by no fault of their own, I don't think you have a heart,” he said, during a primary debate. The comment did not sit well with the GOP establishment, arguably losing Perry crucial support.

But his support for that initiative was undiminished as of late 2014, when he reaffirmed his backing for the law at the Texas Tribune Festival in September. Tying the issue back to his gripe against the federal government’s “mishandling” of the immigration crisis, Perry said:

[U]ntil someone comes up with a better solution to this issue … what we have to remember is the reason we had to address this as a state, was because the federal government’s total and abject failure of securing our border with Mexico. … We don’t have the luxury of doing anything other than addressing this.

And the moderate take on this particular directive is hardly an isolated incident. Perry’s stance on illegal immigrants has consistently been somewhat centrist. In 2010, he criticized Arizona’s draconian new immigration enforcement law (which, among other things, made it a state crime to be in the U.S. illegally) and said it wouldn’t be the correct approach for Texas. In his statement about the law, Perry criticized the legislation on technical grounds.

[S]ome aspects of the law turn law enforcement officers into immigration officials by requiring them to determine immigration status during any lawful contact with a suspected alien, taking them away from their existing law enforcement duties, which are critical to keeping citizens safe.

The Atlantic, in a 2011 article, suggested that this nuanced immigration approach is pragmatic for a Texas governor. Given the high percentage of Hispanics in the state (sitting at around 30 percent this influence means inherently interwoven cultural identities), the porous nature of the long border, and the typically Texan prioritization of economic growth, it would make little sense for Perry to have cracked down on illegal residents.

Yet Perry’s comparatively soft stance on undocumented migrants stands apart from his ongoing, hawkish emphasis on border security. In 2014, Perry spearheaded an initiative to send 1,000 National Guard troops to patrol the border (the third such move during his tenure), claiming that the federal government had failed in its mandate to address the problems of drug smuggling and illegal immigration.

The dual policies (tough on border control, soft on immigrants) are part of a careful balancing act. “It takes a very skilled politician to come across as tough on border security while, at the same time, not turning off the Hispanic voter out there,” Rep. Michael McCaul, a Texas Republican and chairman of the House Homeland Security Committee told The Washington Post last year. “His rhetoric is measured. He doesn’t say stupid things.”

But Perry’s soft stance on immigration only goes so far, and his choice of phrase can be grating. In March, he suggested that work visa holders in the U.S. should be tracked like UPS parcels, and made to leave when their time was up. And, though he has said it would be “unrealistic” to send home the approximately 11 million people currently illegally residing in the U.S., he hasn’t clarified exactly what should be done with them — aside from stipulating that he opposes amnesty.

Perry argues that these questions concerning immigrant reform are premature, since the problem can only be resolved once the border is secured. “Securing the border has to be dealt with and, I would suggest to you, first,” Perry said in 2013, as quoted by The Washington Post. “I don’t think the American people trust Congress to have an immigration bill and secure the border. I just don’t think they trust them, because they haven’t seen the will. For 20 years or more, they have not seen the will in Washington, D.C., to secure the border.”

Whichever way Perry leans during his campaign — towards emphasizing his stance on existing immigrants or his hawkish border control antics — the question of immigration will likely be a defining one for his campaign. Certainly, maintaining his Texan balancing act — retaining Latino votes without alienating fellow Republicans — at a national level will be no mean feat. The issue featured prominently in Perry’s campaign video launched Thursday morning: with dramatic shots of Perry on patrol at the Mexican border, in various forms of dashing border patrol transport.