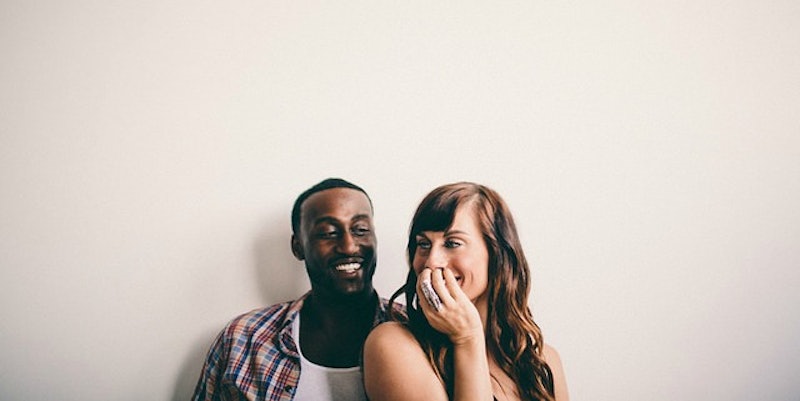 How honest are you? Women are more likely to lie, or at least more likely to admit to it, according to anew survey. A survey of 2,000 people done by British insurance company Privilege found that four out of five women admit to lying every day, sometimes up to 30 times daily, while male fibbers stood at two out of five, the Daily Mail reports. So that's a lot of lying happening, but on the whole the reasons are far from sinister.

The most popular reason for lying was "to make someone feel better" (55 percent) — i.e. lying about enjoying someone else's cooking, one of the most popular lies. This was followed by the potentially more dubious "to not get in trouble" (32 percent) and that old favorite "life is complicated" (25 percent).

There was a common theme, as Privilege's Dan Simson put it, "that even though we can be guilty of telling the odd porky, on the whole, Brits are likely to tell the truth when it matters." That's not to say that white lies aren't potential complicated, though. While some of the popular lies were unsurprising, lying about salary or weight for instance, people also admitted they "regularly pretend to share a hobby with someone they are trying to impress." Isn't that a recipe for disaster? I mean, if I was passionate about soccer it would probably make me appealing to the British men I'm surrounded by— that is, of course, until anything about soccer came up. Then it would only be a matter of seconds before I looked deluded/insane.

So let's steer away from that. But some fibs make sense to make, so here five things it's completely OK to lie about:

1. When You're Covering For Someone Else

I have plenty of friends that have told a fib at work, pretending a mistake or problem is because of a group as a whole rather than singling out one person. Unless that person really deserves to be in trouble, this is totally fine.

2. When The Food Wasn't Delicious

The British public is right about this one. There's nothing wrong with pretending you enjoyed a meal that took a lot of time and energy to prepare. Unless they're trying it out on you before they give it to someone else, or are training to be a professional chef or something — in which case, crush their dreams before they make a fool out of themselves.

3. When It's Their Birthday

Birthdays, contrary to popular belief, are often more stressful than fun. Around my birthday I can be irrational, emotional, overly-sensitive — you name it. And so can a lot of my friends. A few white lies to make the day run more smoothly are fine, just come clean the next day.

"Oh no, the cookie is yuckie. I'll just throw it away." (Away into my purse, until I get into the bathroom and shame eat it when my nephew isn't looking. Why should a 5-year-old gets all the cookies, he doesn't even appreciate them.)

5. When It Happens To Every Guy

It doesn't happen to every guy, it just doesn't. It does happen to a lot of guys, or at least a lot of guys who are looking at me naked, but I'm going to ignore the fact that I'm the common denominator in those scenarios. Don't be patronizing, but a bit of fibbing is fine to make him (and you) feel better.