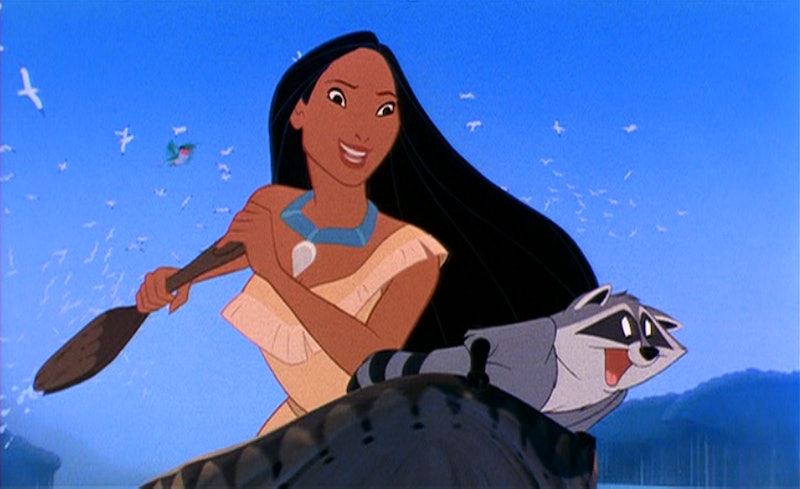 Have you ever heard a wolf cry to the blue corn moon? No, me either. Also, what is a blue corn moon? Whatever the case, I'm not here to talk about some silly line from "Colors of the Wind." Rather, I'm here to talk about the best song from Disney's Pocahontas, "Just Around the River Bend." I will not apologize for loving this song over the slow-moving and Vanessa Williams covered "Colors of the Wind," because, let's face it, all true Pocahontas fans know it is the best song from the entire movie.

Not only it is fun, catchy, and will forever be stuck in your head after watching the movie (probably for the 100th time), it contains meaning and symbolism, all while being relatable. Plus, what better way to celebrate Pocahontas' 20th anniversary than by honoring the beloved and hit song? Not only would Pocahontas be proud, but so would Meeko, Flit, and Percy. Also, they're all probably jamming to it as we speak.

So, here are nine reasons "Just Around the River Bend" is the best song from Pocahontas. Also, don't yell at me if the song gets stuck in your head, because you know you like it.

Does it get much better than watching Meeko go from compassionate to happy to thrilled to mad to scared to downright terrified? No, it doesn't.

The nature and animals featured throughout the "Just Around the River Bend" scene is beautiful and touching. It just goes to show you that it's important to take care of our planet and its creatures.

Have you ever thought about that you can't step in the same river twice? I never did, until I heard this song. Pocahontas, you are so wise.

In addition to being a super fun song, "Just Around the River Bend" is filled with meaning. When she sings, "What’s around the river bend?" she's basically saying "What does my future hold?" and who hasn't thought that? Also, like the river that is "always changing and flowing," so are our lives.

5. It Focuses On Dreams

Pocahontas loves to dream and wants to achieve her dreams. I feel you, girl. Everyone should go after what they want, including Pocahontas.

6. Settling Is Not An Option

Throughout this song and the movie, Pocahontas never settles and follows her own path. In "Just Around the River Bend," Pocahontas chooses the less sturdy river proving she's ready for a challenge and living life her own way.

From making her own choices, to following her heart, to going after her dreams, to thinking about her future, "Just Around the River Bend" is one relatable song. Those are things I ponder daily. What about you?

She takes on that waterfall like no other. If I ever go whitewater river rafting, I'm calling Pocahontas.

9. It Makes For A Great Sing-Along

Duh. Now excuse me while I go bust out my best rendition of "Just Around the River Bend."