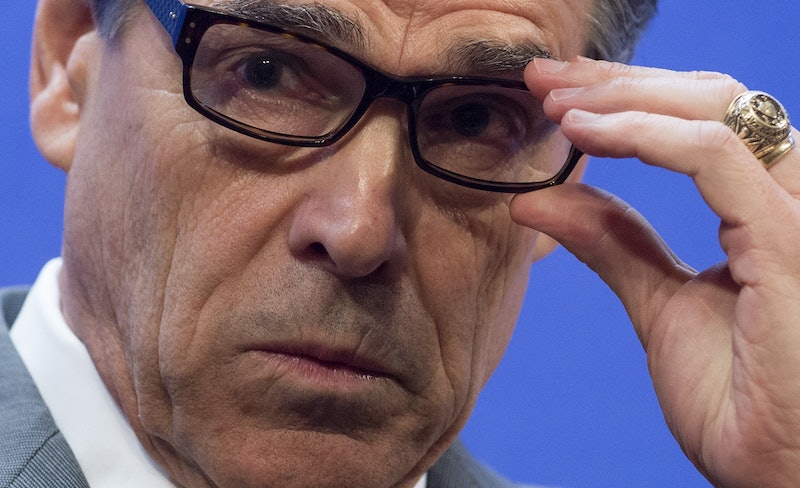 Following his campaign announcement on Thursday, all eyes have been on Rick Perry's new image — this so-called Rick 2.0. One of the most noticeable differences between the old Rick and the new and improved candidate are a pair of black-rimmed glasses that now decorate the former governor's face. They may just look like another pair of pretentious hipster-nerd glasses to you — the kind that guys named Sergio who DJ at the Diesel store would wear — but Rick Perry's glasses are part of his campaign strategy, perhaps even the centerpiece of his second run. So, naturally, I have a lot of feelings about that.

Even though they've been brought back into the spotlight, those glasses are not a new addition to Perry's look; he's been wearing them since 2013. In the year that followed, several media outlets started speculating over the deeper meaning behind them, refusing to settle for the simple theory that he grew fed up with wearing contact lenses or maybe his eyesight suddenly began to deteriorate right after his failed 2012 campaign. Yeah, I guess I'd be incredulous too.

Many outlets suspected that the specs were meant to be a quick visual remedy to repair Perry's harebrained image after he forgot the third federal agency he'd eliminate as president during the Republican presidential debates. It was the political strategy equivalent of stuffing your bra in junior high.

The New Yorker joked in a satirical piece that Perry's team had designed a new two-pronged approach to making him appear smarter to voters: wearing glasses and not speaking. In a similar joke piece, Huffington Post contributor Kipp Friedman wrote that a state jury had indicted Perry for wearing hipster glasses.

Perry commented on the glasses himself in August 2014 at a groundbreaking event at the Occidental Petroleum complex in Midland, Texas. He revealed to the Associated Press that the glasses were from the Inspiration line by designer Jean Lafont and that his wife, Anita, had picked them out for him.

So if the rumors are true, is it working? Do the glasses make Perry seem smarter, more intellectual, perhaps more cultural and well-traveled? Here are my thoughts.

1. When I see him squinting like so, it makes me think that the glasses are just props.

2. It's much harder to make emphatic expressions like this and be taken seriously. Believe me, I've tried and I will never try to return a used microwave to Target while wearing glasses ever again.

3. No amount of eyewear will help Perry's doltish image if he's going to hang his mouth open like that.

6. Although I will say the shades go well with his sassy eyebrow raise.

7. There's something about a man giving you the "yeah dude" gesture while wearing glasses that's just a little bit less "yeah dude."

8. Same thing with the Success Kid fist pump. He just doesn't look like his heart is really in it.

9. The glasses do emphasize Perry's "don't mess with me" face very effectively though.

10. When you put glasses to an angry man, there's something very spine-chilling about it. I mean, there's nothing scarier than nerd rage.

11. This is Perry's attempt at Blue Steel, and the glasses do lend a certain air of "I'm complicated" to his modeling look.

12. Final consensus? He looks like an aging Rivers Cuomo from Weezer.

More like this
The Internet Can’t Get Enough Of Viktor & Rolf's Upside Down Dresses
By El Hunt
'Friends' Star Maggie Wheeler Offers Support To Matthew Perry After Reading His Memoir
By Alyssa Lapid
The Cheapest, Coziest Clothes On Amazon
By Alexandra Elizabeth
These Celeb-Stylist Designed Statement Socks Are The Perfect Way To Up A Man’s Sock Game
By Candace Nagy
Get Even More From Bustle — Sign Up For The Newsletter
From hair trends to relationship advice, our daily newsletter has everything you need to sound like a person who’s on TikTok, even if you aren’t.