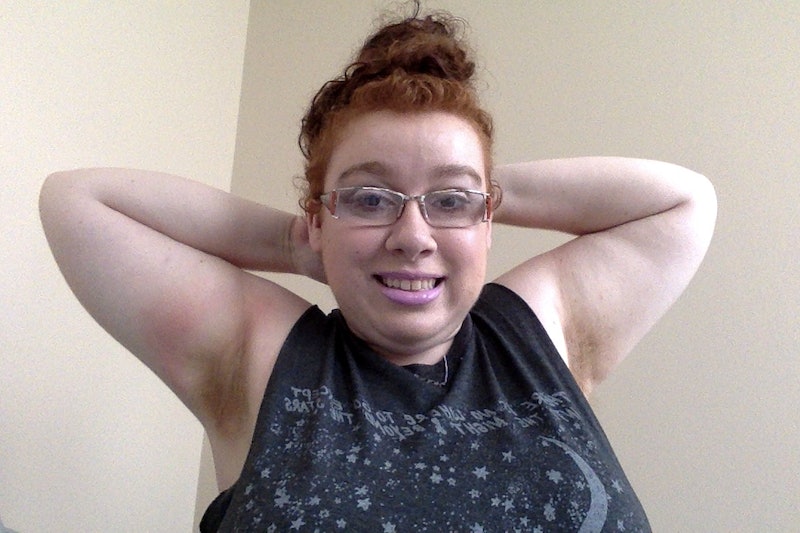 If you're a woman who has ever had hairy legs or not shaved your underarms for a month, you know how much stigma exists around women who have body hair. This intense pressure to look like a hairless chihuahua is real and for many of us, it keeps us shaving in the shower daily or taking monthly trips to salons for excruciating waxing sessions.

So I decided to talk back to this stigma once and for all by creating the first annual #BodyHairDay, which is going to be a celebration of body hair for all of those who are marginalized or shamed for having something so natural. This event is meant to be gender inclusive, since many folks within the LGBTQ community have also faced these pressures but aren't cisgender women. If you feel called to participate, please do!

Speaking of participation, all you need to do to join is use the hashtag #BodyHairDay on social media along with your body hair pictures! You can show off your pits, legs, chest, or whatever other hair you've been made to feel ashamed of by society. The conversation is going to be happening on Twitter, Instagram, Tumblr, and other social media sites throughout the day, with an official Twitter chat happening at 2 p.m. Eastern Time, where people are invited to delve into the topic of body hair and oppression more deeply. Just search the hashtag #BodyHairDay to find the feed!

If you're wondering more about why I created this holiday, it's because I often choose not to remove my body hair — but feel stigmatized for not doing so. As a woman, I’ve been told since I was a teenager that having body hair is gross and that I should remove it no matter what. But I wasn’t uncomfortable with my body hair — other people were. I want people to realize that women and others who have been minoritized for having body hair (or not removing it) are not gross or unhygienic. And that more importantly, we exist.

The beauty standard rooted in shaving began to become the norm come the early 20th century, as women were't expected to shave their legs until the late teens and 1920s. It was during this era that women could show their legs in public for the first time in modern Western history, and razor companies that were already marketing their products to men saw an opportunity.

Gillette released the first advertisement for razors that were marketed to women in 1915, and as time went on and women gained more economic power, this idea became only more popular.

Today, shaving is not only the norm, but it is expected. Women who don't shave their legs or armpits are shamed and stereotyped as being dirty and unhygienic, when men don't face these same realities for their own body hair. It is these strict standards that force conversations about body hair to live in the dark — and I think it's time we open the doors and come out!

Body hair is normal on anyone, and I would argue that women are probably more naturally hairy than you would think — you just don't know about it because they're removing their body hair. I want to change this idea that body hair on women is abnormal or disgusting, and bring the culture to treat women as they do men on this issue: leaving the choice of shaving to be up to them.

If you want more information about the holiday, check out the informational video below. If you want to get involved directly, contact me, Erin McKelle, on my website and remember to follow the #BodyHairDay hashtag all day on June 8th!