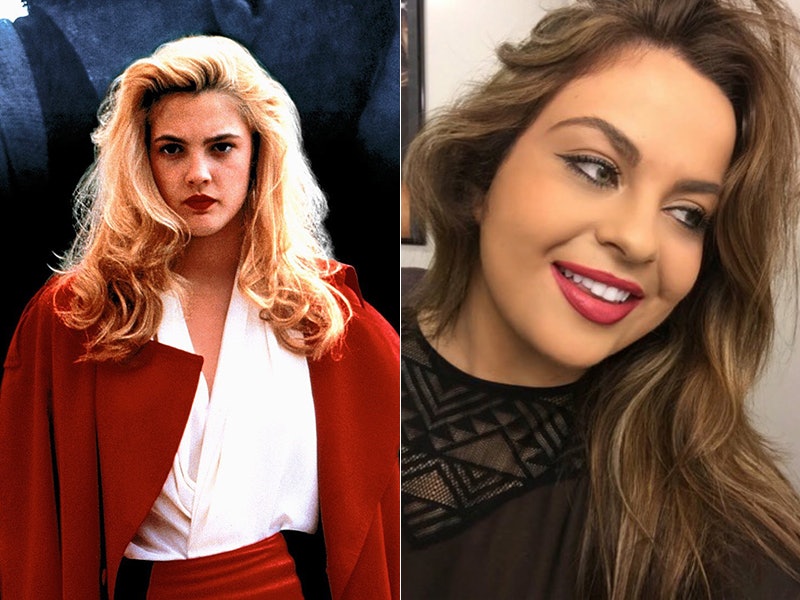 The aspiring disco queens of the '70s modeled their bellbottoms after Cher. The permed blondes of the '80s danced in their bedrooms to Madonna. The moody grunge teens of the '90s? Well, they obsessed over Drew Barrymore's now-iconic makeup looks. A child star gone rogue, Barrymore epitomized the essence of that final decade before the millennium. Between the signature films, the unique fashion, and —of course — the standout makeup, Barrymore helped to shape the iconic years of our childhoods and thankfully, we have the DVDs, the photographs, and now Drew Barrymore's very own makeup line to resurrect those blessed years once again.

A Golden Globe winning actress, mom of two, and now entrepreneur, Barrymore launched her first makeup line, FLOWER, featuring extremely affordable products made right here in the USA. I decided to put the line to the test by picking three of of the star's most iconic '90s beauty looks and recreating them using only FLOWER products. Spoiler alert: it was super easy, totally low-maintenance, and smokin' hot.

While audiences first fell in love with Drew as an adorable little girl in E.T. The Extra Terrestrial, it wasn't until her first lead role as vixen Ivy in Poison Ivy that the world realized she had grown up into a full-fledged w-o-m-a-n. Suddenly, one of the most iconic beauty looks of the '90s was born: pale, matte skin, plump red lips, and thick brows.

For this look, I started off with a layer of FLOWER's About Face Foundation followed by Lighten Up! Brightening Concealer under my eyes and on any blemish areas. Since matte is the goal, I then added a layer of Powder Up Loose Powder all over my face with a big, fluffy powder brush. No contour, no blush, no highlight. The '90s kept its face makeup very low maintenance.

Next, I added a black winged eye with Easy on the Eyes Eyeliner in Black and about four coats of INTENSIF-EYE Volumizing Mascara in Intense Black. My brows are naturally pretty thick, so I just shaded them in a bit more with the darkest shade in the Take a Brow Brow Kit and an angled brush. Don't worry about your eyebrows being groomed to perfection — the goal is to keep them looking rather unkempt, so I brushed them backwards with an eyebrow brush to achieve a messier look.

To top it all off, I overlined my lips with Line and Shine Lip Liner in Cherry Red to make them look just a luscious as Drew's and then filled in my pucker with the Kiss Stick in Desert Flower. Voila! A '90s take on Marilyn Monroe.

Once the late '90s hit, Drew became the queen of the millennium rom-coms, with lead roles in Ever After, Home Fries, and Never Been Kissed. These films gave way to a much softer, almost exaggerated bubblegum theme that carried over into Y2K and the Charlie's Angels remake. The elements for this look? Pink lips, rosy cheeks, and varying levels of electric blue lids.

Starting off again with a flawless matte base using foundation, concealer, and powder, I then added a wash of the blue shade of the Secret Garden Eyeshadow Quad all over my lids up to my brow bone, topping it off with a few thick coats of INTENSIF-EYE Volumizing Mascara in Intense Black. For that peachy glow, I dabbed a mixture of the Kiss Me Twice Lip and Cheek Chubby Stick and Win Some, Lose Some Cream Blush to the apples of my cheeks and blended upward.

For that pucker, I first lined my lips with Line and Shine Lip Liner in Rose and then filled it in with the Kiss Stick in Petal Kiss, topped with a generous layer of Shine On Lip Gloss in Lovely Lotus. If you're feeling adventurous, especially in these glorious summer months, give a blue lid a chance. It will compliment every eye color and skin tone — just be sure to pick the appropriate shade. The darker your skin, the brighter, more electric the hue of blue.

When Barrymore wanted to step it up a notch from the bubblegum blue, she often turned to some variation of vampy, smoky eyes, thin brows, and a dark lip to amp up the grunge and remind everyone that underneath the flowers in her hair, she was still a rebel. This GUESS ad was especially fantastic.

This look require very little precision, especially when it comes to the eyes. Your best friend will be FLOWER's Eyeshadow Quad in Twilight Moon and the Eyes on the Prize Eyeshadow Chubby in Keep Your Pansies On!. I started by lining the bottom of my eyes with the chubby stick and drew the line upwards toward my brows, blending it into my eye socket as I moved upward. Next, I grabbed the darkest shade in the eyeshadow quad and blended it in with the cream shadow. Then, I mixed the lighter two gray color and blended them toward the corners to open the eye up. For an added finish, top your brow bone with the white shade in the quad and add a few coats of INTENSIF-EYE Volumizing Mascara in Intense Black.

For your cheekbones, keep it muted with the Lip and Cheek Chubby in Rosie Posie. Since the eyes are heavy, I opted not to go for red on my mouth, and instead, created my own plum using the Easy on the Eyes Eyeliner in Aubergine as a lipliner and then blended with the Kiss Stick in Tea Rose. But, if red is your flavor, grab your deepest red lipstick and line with a very dark, almost black liner and blend away.

Kudos to Barrymore for creating a line of makeup so true to her incredibly enviable beauty aesthetic. Now please excuse me while I go rewatch her hair in Batman Forever.