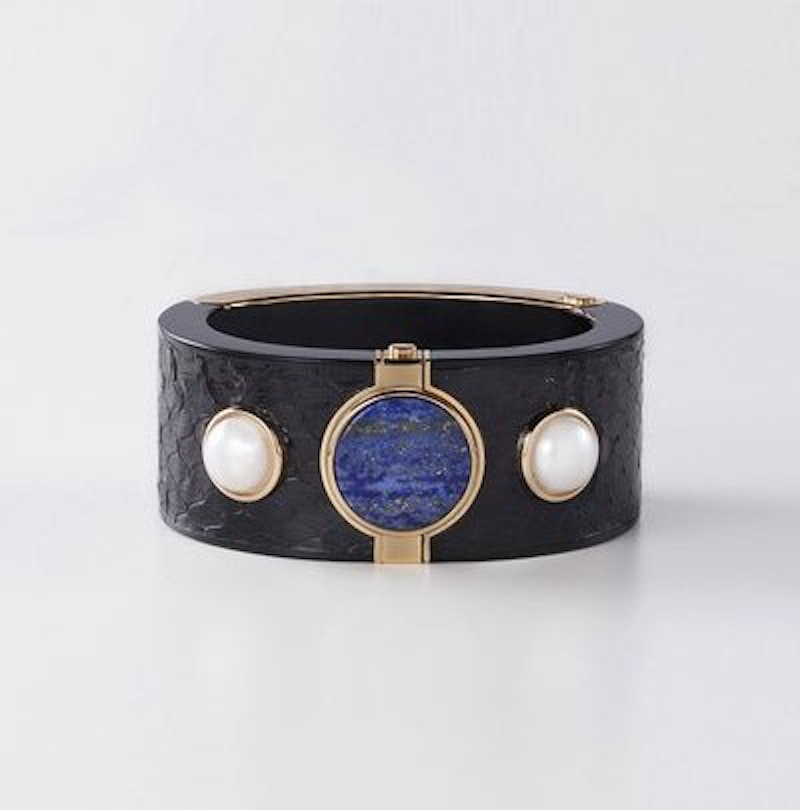 The argument that the recent rise of wearable technology is tied to the fact that women "only want technology when it goes with their outfits" is more than sexist and rude — it's also incredibly ignorant. The new developments in wearable tech jewelry aren't about making "serious" technology palatable for women's tiny fashion-obsessed brains. Rather, they're about a wider change in how we approach technology in general: we're increasingly interested in seamlessly integrating it into our lives, often by using items where the technological component is practically undetectable.

Though some tech-heads opt for ostentatiously tech-y looking products (like enormous headphones), many of us want the tech items that help us run our lives integrated into other objects, as quietly as possible: hence, smart bags, smart luggage, smart bikes, and smart watches. As microprocessors become smaller than ever, we're now seeing the first wave of completely hidden technology.

So it makes sense that technology innovators are now focusing on jewelry. For one, jewelry is meant to be durable; unless you're a devotee of fragile South Sea pearls, your jewelry cabinet is likely full of metals and hard stones, which are pretty sturdy housing for electronics. For another, jewelry's prominence on our bodies makes it an ideal spot to place all sorts of essential technology — giving us easy access to everything from Bluetooth capability to heart monitors.

These nine pieces of smart jewelry represent the latest of wearable tech innovation — but this is clearly only the beginning. Will your 3 carat engagement ring conceal a mini-computer in the future? Here's to hoping.

1. The Ring That Notifies You About Everything

Ringly are pioneers of smart jewelry — and their product helps you stay connected to the world without being hunched over your phone. The cocktail-sized ring vibrates when certain notifications happen on your phone, from calls to schedule reminders. You get to customize the things it notifies you about via a phone app, and thus don't have to check your phone every two minutes. It's $195.00 on pre-order.

2. The Cuff That Notifies Friends In An Emergency

If you're the kind of person who likes to call up friends on your phone when walking home at night just to feel a little safer, then you may want to put in a preorder for a Cuff. The smart bracelet or necklace (available in several designs) has Bluetooth connectivity that links to your phone, so it will notify you of all important emails and alerts that you receive. But its bigger selling feature is its safety capability. If you press the Cuff for 2-3 seconds, it will send an emergency message to a network of people you've chosen, and they can view your location via GPS, coordinate via group text, or call 911. The basic model is $49.00.

If Ringly isn't your style, Altruis's jewels may be for you. They're available set in necklaces, bracelets and rings; you can also purchase them simply as stones on their own. The jewels are made of ceramic zirconia, and contain a tiny circuit board that hooks up to your iPhone via the Kovert app. The app is seriously customizable: you can easily alter the connection and notification settings according to whatever you're doing. So if you're at work, you can set it to only vibrate when you get work or emergency calls; on the weekend, you could set it to notify you when friends or family get in touch. Stones without jewelry mounts are $169.

4. The Pendant That Monitors Your Sleep And Period

We've gotten seriously excited about Bellabeat's Leaf before, but it's worth noting again — particularly if you're trying to get pregnant, or just want to monitor your fitness and sleeping levels with a more subtle look than the typical band-based fitness tracker. The Leaf tracks sleep patterns, heart rate, activity levels and your menstrual cycle— it even provides fitness guidance and exercise advice via an iPhone app. It also only needs to be charged every 6 months, which is frankly pretty ridiculous. It's $120 on pre-order.

5. The Fitbit With A More Elegant Look

Some of us simply don't work in environments where your typical chunky fitness bracelet fits in. So, executives, lawyers, and other women who work in decidedly formal corporate offices, the Tory Burch Fitbit is for you. Though it contains the same technology as a standard Fitbit band (a Fitbit Flex, which tracks activity and sleep), the Tory Burch version is sleeker and more elegant. Birch has also produced a line of much cheaper and more casual printed silicone Fitbit bands, designed for women whose lives or senses of style don't mesh with the standard plain band. The high-end bracelets retail for $180.

Though there are plenty of smart jewelry options for a shopper on a budget, there's also a lot of smart jewelry out there for people with luxe tastes. The MICA bracelet is a collaboration between Opening Ceremony and Intel, and is made with the most high-end elements they could find: snakeskin, pearls, lapis, obsidian, 18k gold and a sapphire touch screen. The bracelet comes hooked up to a variety of specific apps: it can help you search local restaurants and stores via Yelp, read Refinery29 updates, and get Gmail and Facebook alerts, as well as normal iPhone notifications. Being this fashionable doesn't come cheap, though: it's $495.00.

7. The Bracelet That Tricks Your Body Temperature

Of course, wearable tech doesn't begin and end with connective devices. The Wristify bracelet, which is hoping to launch soon, was developed by four MIT students to change the body's internal thermostat, by producing heating or cooling sensations on the wrist. It sounds a bit kookyl, but the application of a little bit of localized heat or cold can actually help your whole body feel that way: think of wrapping your hands around a hot drink on a freezing day, or wetting your face in summer. It also looks amazing. There's no price yet, so keep your eyes peeled.

8. The Clutch That's Also A Mini-Speaker

OK, it's not strictly jewelry, but Stelle Audio mini-clutch has enough bling to blind you — and I cannot think of a more party-ready accessory if I tried. This clutch purse is technology for those of us who want a place to stash our ID, but also want the audio capacity to start our own party. It's a functional clutch that also utilizes the highest level of mini-speaker technology, including a cable-free Bluetooth connection, speakerphone for calls and a USB for charging. It's wacky, but there's some serious technology packed in a very tiny space. It's $190.

Trust Swarovski to come up with a way of integrating crystals into the wearable tech market. The crystal giants have developed the Shine bracelet and watch with tech company Misfit. It's a crystal-encrusted accessory which acts as a fitness tracker and sleep monitor (which coordinates with a fancy iPhone app, of course). But because I am a magpie and like shiny things, I am most impressed by the bracelet's watch function. You tap the crystal twice and your bracelet suddenly becomes a watch, showing you the time. Sorcery! A set, with various bands, is $168 on pre-order; it'll drop this July.