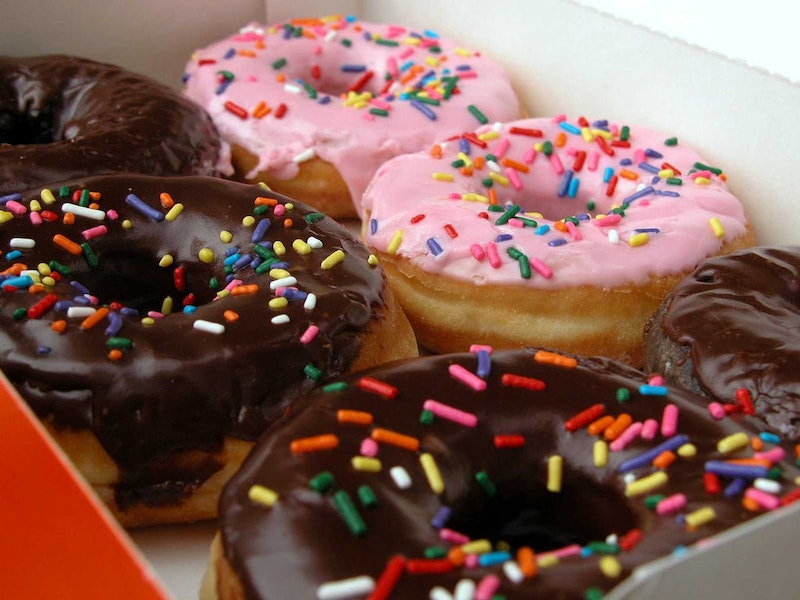 Happy National Donut Day, everyone! No doubt you're planning on availing yourself of the myriad opportunities for free donuts today — but in the face of so many choices, which do you pick? That's where Foodbeast's “Essential Guide to Donuts” video comes in. The video isn't new — Foodbeast first introduced it to the world for National Donut Day in 2014 — but given that today marks the return of that delicious and pastry-filled holiday, now seems like a good time to give it another look.

The humble donut, you see, has a long and storied history. We're not totally clear on its exact origin, but it's suspected to have been invented sometime in the 19th century. One theory posits that they were the creation of Dutch settlers in North America during that century; another suggests that an American by the name of Hanson Gregory invented it in 1847 on a lime-trading ship; another notes that the first mention of the word “donut” occurred in an 1803 English cookbook; and yet another describes the term “dow nut” being found in a domestic handbook written in 1800.

Regardless as to who's ultimately responsible for the pastry, though, countless variations have sprung up in the century since. So, then: Given all these magnificent choices, how on earth are you supposed to decide which one to get today — or any day, for that matter? Foodbeast's video guide walks us through a whole bunch of our options, describing what makes each one unique; hopefully, it will help us finally arrive at a solution to that terrible, impossible decision.

Check out a few highlights below, and scroll down to watch the full video. Happy donut-ing!

Apparently these guys are also called “sinkers,” which is not something of which I was aware until right this very minute. They're dense and kind of muffin-like, ideal for dunking in coffee. Given that I am a Massachusetts native, this might explain why I remember my childhood as being so full of cake donuts — Dunkin' Donuts is called Dunkin' Donuts for a reason.

There are actually a couple of different types of crullers; some of them are lighter than others — French crullers, for example, which are made out of choux pastry — but they're all known for their ridged surfaces. The donut's name derives from the 19th century Dutch word “krullen,” or “to curl.”

The term “fritter” can apply to a huge number of foods, but what ties them all together is that they usually involve batter that's been fried in some capacity. When we call a donut a fritter, usually we're referring to a small cake that's been made out of corn meal, fried, and covered in something sweet (in this case, a glaze).

So named for its resemblance to… well, a bear's claw. Interestingly, the kind of bear claw we usually get in donut shops is actually more like a fritter that's just been shaped like a beastly claw; classically, they're more like Danishes.

I grew up calling them Munchkins (again, I hail from the land of Dunkin' Donuts), but apparently in Canada they're often referred to as “timbits” — it's a Tim Horton's thing. It's worth noting, though, that Tim Horton's is actually pretty specific about timbits not being donut holes; according to the Toronto Sun, they're made with their own cutter, which is slightly larger than the one used to punch out the middles of the bakery chain's ring donuts.

Check out the full video below for much, much more. Who knew one pastry could have so many varieties?