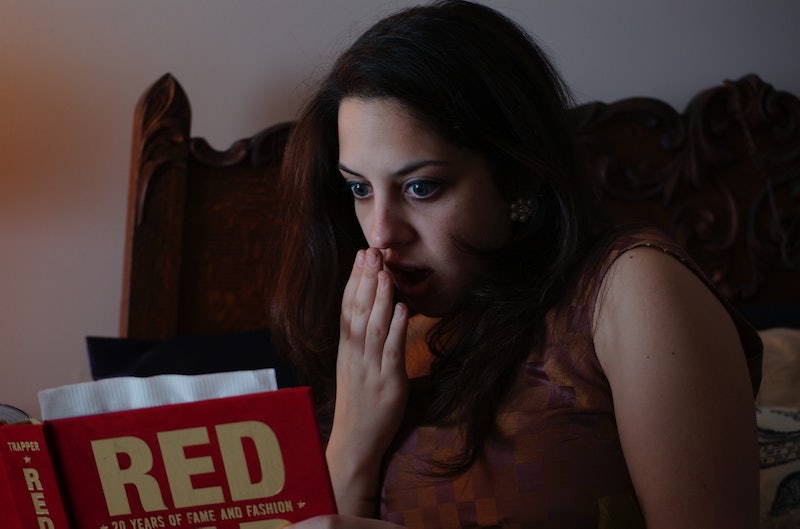 High school was full of plenty of little traumas and dramas, like not getting asked to prom or having a giant pimple in the middle of your forehead on yearbook photo day. But nothing was probably quite as traumatizing as what our teachers had us reading in English class (although you didn't realize it at the time). Honestly, it’s probably a good thing we were too preoccupied with getting out of dodgeball to notice just how freaking weird a lot of the stuff in the classic fiction on our syllabi was.

Now, now, I’m not suggesting we shouldn’t read these books. They might be full of incest and sexing up ghosts in graveyards, but they’re absolutely amazing, and everyone should absolutely read them. Of course, a lot of the stuff we'd call incest or bloody murder or spectrophilia (you'll see, below) today was actually considered pretty normal back when some of these classics were written, which is worth thinking about. And today, some of the most interesting parts of these novels come out of the shocking, totally insane things that we’ll all hopefully be lucky enough to experience only in book form.

We all loved The Odyssey. It’s probably one of the few books we all actually read in high school. What’s not to love? There are monsters and nymphs and gods and ships, and Odysseus is the quick-witted hero we all want to be. Well... and he’s also a mass murderer.

It’s probably coming back to you already, from the depths of the please-let’s-forget-that-happened part of your brain. Don’t you remember how after all those war-time heroics, after taking down a cyclops, and resisting the sirens (and, of course, the sheer, terrible torture of seven years of sex with a nymph goddess…), Odysseus comes home and instantly starts brutally murdering every single dude who was up in his house flirting with his wife? And it’s a big house too, so that’s a lot of dudes. Not to mention, after the massacre, he makes the maids clean up all the blood and guts, before he hangs them.

That Romantic Guy Who Was Actually Kind of a Stalker in The Great Gatsby by F. Scott Fitzgerald

If The Great Gatsby is the Great American Novel, then let’s hope it’s for the beautiful writing, and not for the guy the book is named after. Jay Gatsby may be all suave and rich and handsome, but his ascent to riches is completely driven by his obsession over his vapid ex-girlfriend Daisy. If you’re hesitating to call him a stalker even after he turns criminal bootlegger and spends years on the grind all just to win back his ex, then maybe you’ll be convinced by the fact that he’s been collecting news clippings of Daisy over the years, and then bought a house across the river from hers so he could keep an eye on her.

Oh, and lets not forget that instead of just stopping by and being like, “Hey, Daisy! I live across the pond,” he spends millions on lavish parties hoping that she’ll be attracted to all the shiny and just happen to stop by eventually. How does that not scream shady? Not to mention, she’s MARRIED, as in, give up already, bro. Yeah, that stalker title’s looking a bit more convincing now, right?

Unrelated — let’s also not forget that Daisy straight up murders a woman with Gatsby’s car and just keeps on going.

Bestiality and Spectrophilia, aka Sex with a Ghost in Beloved by Toni Morrison

There are a lot of “yeesh” moments in Beloved. It is, after all, a book about slavery. But one of these moments that often gets overlooked, or maybe deliberately forgotten, is the sex with calves: the sex-deprived men on a male-heavy plantation resort to having sex with calves while they wait for Sethe to choose one of them as a husband.

As for the spectrophilia... it’s debatable. Sethe believes that the woman who comes to live with her is the grown-up ghost of the daughter she murdered. But it's possible that there's nothing ghostly about her and she's just a poor soul who was traumatized by slavery. So, when Paul D (Sethe's boo piece) has sex with this woman maybe it's just good old fashioned adultery... or maybe, just maybe, dude got busy with a ghost.

Incest in The Sound and the Fury by William Faulkner

Faulkner can be pretty obscure, and if you’re reading him in high school, it’s pretty likely you missed some things. So let’s just be simple with this one. Quentin Compson is obsessed with his sister Cady. He tells his father that he has committed incest. Even though he never actually “does the deed” with his sister, he wants to, and that’s enough to make him jump off a bridge.

I could probably just point to the "hunt-the-zipper" game that kids were encouraged to play in the novel and rest my case, but let me just point you to the part of the novel where an elementary school teacher reports to the Director what the kids have been doing that day:

"We had Elementary Sex for the first forty minutes,’ she answered. ‘But now it's switched over to Elementary Class Consciousness."

In the novel, the notion of waiting at least until the teens to have sex is actually laughable:

We haven’t quite gotten to “Elementary Sex” class just yet, but some see Huxley’s sexualization of children in Brave New World as something of a prediction of the sexual freedom of today’s society…

Necrophilia and Incest in Wuthering Heights by Emily Brönte

A lot of readers would consider Wuthering Heights a romance... but between the incest and the necrophilia that's hinted at, let's hope those readers weren't paying too close attention. Although those Brönte sisters sure know how to write angst, they’ve also got a bit of a weird streak, especially Emily Brönte.

The main heroes of the novel, Heathcliff and Catherine, grow up as brother and sister. Sure, they’re only brother and sister by adoption, but let's not pretend you weren’t still weirded out by that incestuous scene in Cruel Intentions. Of course, Brönte doesn’t come right out and say Heathcliff gets frisky with Catherine’s corpse, but the obsession with her dead body is clearly there. The scene where he describes how his passion for Catherine is so deep that he tried to dig down in to her grave to be with her is the particular scene that gets academics screaming “necrophilia” (or at least attempted necrophilia):

‘And if she had been dissolved into earth, or worse, what would you have dreamt of then?’ I said.

'Of dissolving with her, and being more happy still!’ he answered. ‘Do you suppose I dread any change of that sort? I expected such a transformation on raising the lid — but I’m better pleased that it should not commence till I share it...'

'Being alone, and conscious two yards of loose earth was the sole barrier between us, I said to myself ‘I’ll have her in my arms again! If she be cold, I’ll think it is this north wind that chills me; and if she be motionless, it is sleep.” I got a spade from the tool-house, and began to delve with all my might — it scraped the coffin; I fell to work with my hands; the wood commenced cracking about the screws; I was on the point of attaining my object, when it seemed that I heard a sigh from some one above, close at the edge of the grave, and bending down. “If I can only get this off,” I muttered, “I wish they may shovel in the earth over us both!"'

Infanticide in The Giver by Lois Lowry

There’s a lot wrong with the colorless world of The Giver, but by far the most astonishing is all the baby murder. In case you don’t remember, it’s the whole reason the main hero Jonas runs off with a baby and turns the whole society upside down. Jonas’ father had been killing babies via euthanasia for years. Years.

Just like in Wuthering Heights, in Frankenstein Elizabeth is a child when she is taken in by the Frankenstein family. She’s raised as a sister to young Victor Frankenstein, which makes it a little creepy and incestuous when they get married later. So there's that.

In the wild life of Moll Flanders, it can be easy to forget all the insane moments in a life marked by thievery, ruthlessness, and adultery. But still, accidentally marrying and having three kids with your brother probably takes the cake. That’s right, Moll goes through a quite a few men, and when she finally finds one she actually likes, she also finds her long lost mother (whom she thought was dead), who turns out to be... his mother too. Whoops?