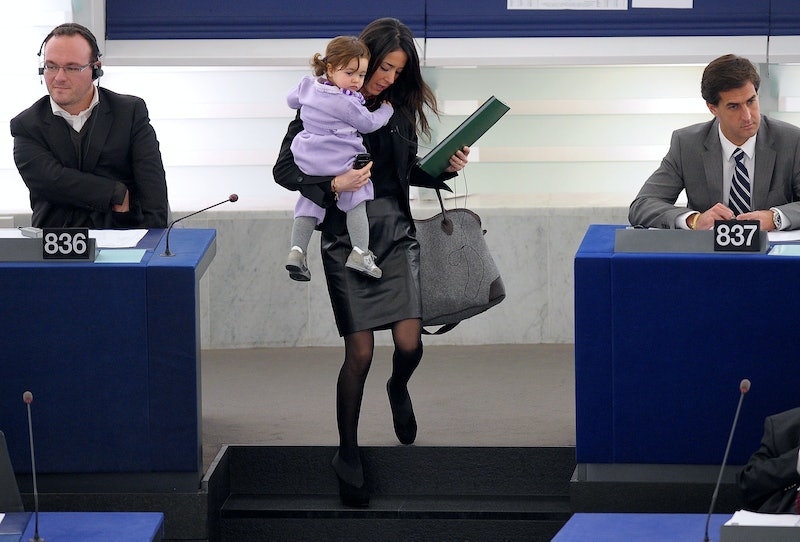 There are 168 hours per week, which means, "If you work 46 hours per week and sleep 8 hours per night that leaves 66 hours for other things." In spite of the math, women still fret about how to find a work-life balance, but, as Laura Vanderkam argues in I Know How She Does It: How Successful Women Make the Most of Their Time , 66 hours is a lot of time to do a lot of things outside of work, especially if you have some tips about how to use your time effectively.

For this book, Vanderkam solicited weeklong time logs from women who, "by at least one definition, had it all: They earned more than $100,000 per year [and they] had at least one child (under age 18) living at home." She called this the Mosaic Project, a time diary study of 1,001 days in the lives of professional women and their families. Although there's different definitions out there for "having it all," Vanderkam figured that these women were juggling a lot of moving parts yet still successful in their careers, and their earning power placed them in a minority (less than 4 percent of employed women overall earn six figures).

What Vanderkam found from this study are the incredibly creative and well-thought out ways these women scheduled their lives to fit in everything they wanted to do, and she outlines some of the most useful strategies and frameworks to help make the most of your own 168 hours every week.

Here are 13 tips and strategies, based on real women's time logs, to taking control of your schedule without going totally insane.

Know How Much Time You’re Spending

The first step in finding more time is figuring out how much time you’re spending on each activity in your life, and this, of course, is where the time logs come in. Time logs force an individual to take daily stock of activities, rather than just guessing on a survey, and are therefore more accurate. "People can lie on these logs, to be sure, but it's harder to do." Having a good understanding of how you spend your time is the first step in taking control of it.

Figure Out When You’re Most Productive

Once you know where you’re spending your time, it’s easier to get a sense of when you’re most productive. For some people, it's early in the morning before everyone else wakes up. For others, it's right around dinnertime. Once you figure out when your most productive hours are, try to adjust your schedule around them, but don't beat yourself up if you can't work your most productive hours every day. If you can get that block of uninterrupted time for two days a week, it's better than none.

Adjust Expectations of What Makes a “Good Parent”

The hallmark of a “good parent” seems to be sitting down for family dinner every weeknight, but Vanderkam squashes that myth. She tells the story of Carolyn Polke, whose work schedule and hour-long commute made it hard to come home for dinner with her two daughters. Instead of rushing home and feeling like she left things at work unfinished, Polke went into work a little late every morning, eating breakfast with her kids instead of dinner. She's still spending quality time with her kids, just at a slightly different time than others might, and she's no worse a mother for it.

Humans are humans and need things like sleep, so it's important to build "unclaimed time into your life, particularly into your work life, both for sanity and so you can seize new opportunities without life falling apart." Thinking through your schedule doesn't preclude spontaneity, but only if you've haven't booked every waking minute.

Create Opportunities to Have Fun

"The more you have going on, the more you do," notes Vanderkam. If you want to do more fun activities with your family, remember that "creating memories is often about creating the opportunities for memories." If you're used to doing more activities, and take even small steps toward planning them like going to a community pool or local playground, it'll be harder to spend the evening on the couch.

No matter how many times you pick up your kids' (or boyfriend's or husband's, for that matter) toys, they will always end up scattered across the living room floor. Yes, you could spend a spare five minutes putting everything back in its place, but really, it's a futile exercise of Sisyphean proportions that's not the best use of your time.

There Are No Extra Points for Martyrdom

To that end, remember that, "No one wins in the Misery Olympics." It's important to take some personal time rather than always focusing on achieving something for someone else. "You don't win points in the game of life for working through vacation and personal days if you wind up burned out as a result."

Make Time for Coworkers and Colleagues

Many working women write-off socializing with coworkers in order to have a full work and home life, but Vanderkam explains that it's not a trade-off you have make. Instead of scheduling a formal meeting with someone, grab a cup of coffee or go on a walk around the park with them and chat about what's been going on. Lisa Camooso Miller recommends "'mom o'clock. I meet for a cocktail with a reporter at four thirty.' Often," Vanderkam notes, "the reporter is happy for an excuse to leave early. By 5:30 p.m., they've bonded and the reporter can then head off to his dinner and Miller can be home by 6:15 p.m." Being a little strategic means networking with colleagues doesn't have to be forgotten.

There Is “Good” Multitasking

A lot of people hate on multitasking, which Vanderkam describes as "the bête noire of productivity literature." But there is such a thing as "good" multitasking: "The best categories for multitasking are things that use different parts of your brain." Talk to your mom or your dad on the phone while you fold laundry or do the dishes. Doodle in your notebook while sitting in a meeting. Knit a scarf while taking a conference call. These tasks use different parts of the brain, thereby tricking you into enjoying the otherwise unenjoyable task and maybe even helping you pay better attention.

Finding a good work-life balance is as much about making time for work as for personal obligations, even though the general narrative is that of a woman struggling to find more personal time amidst all the work. But, as we've established, women who participated in this project tended to work less than they though, "But it's also okay to enjoy what you do for a living and want to do more of it," Vanderkam notes. If finding a better balance means working more, then go for it, without any guilt.

One effective way to add more working hours into your schedule, or maximize the number of hours you're already working, is to use a split shift, "some work happens during the day, and some at night, too." Vanderkam found about 45 percent of women she surveyed used this strategy. Some women left work early to take their kids to an activity and then made up those hours before bed. Other women got up a couple of hours before their kids did. "It's the same number of hours, it's just worked in two chunks instead of one."

No matter how much time you spend digging yourself out of thousands of unread emails, "you will never reach the bottom of your inbox," writes Vanderkam. (Emphasis is her own.) Trying to organize your email is an example of a task that seems productive and feels practical but is really just a huge time suck, and you want to minimize the number of these in your life. "There's no virtue in being productive towards ends that don't matter," explains Vanderkam. If you don't get to inbox zero, don't worry: "Earth will not crash into the sun."

Take Advantage of the Space

My favorite anecdote from this book was from a woman whose son played a lot of soccer, and she told Vanderkam, "three of us moms, we'll get sushi, and grab it to go and get a bottle of wine and sit in the car" while their sons practiced. There's all this dead space we don't acknowledge as useful time, but those are the moments when you can eat sushi and drink wine in a parking lot with friends. That space can be used to the fullest, too, just like all the 168 hours in your week.

More like this
These 4 Zodiac Signs Have Naturally Inquisitive Souls
By Nina Kahn
Wimbledon Alters All-White Kit Rule Amid Candid Period Discussions
By Catharina Cheung and Rachel Mantock
Allie Rowbottom Will Have Her Feminism With A Side of Botox
By Samantha Leach
Bustle Daily Newsletter: November 30, 2022
By Hayley Schueneman
Get Even More From Bustle — Sign Up For The Newsletter