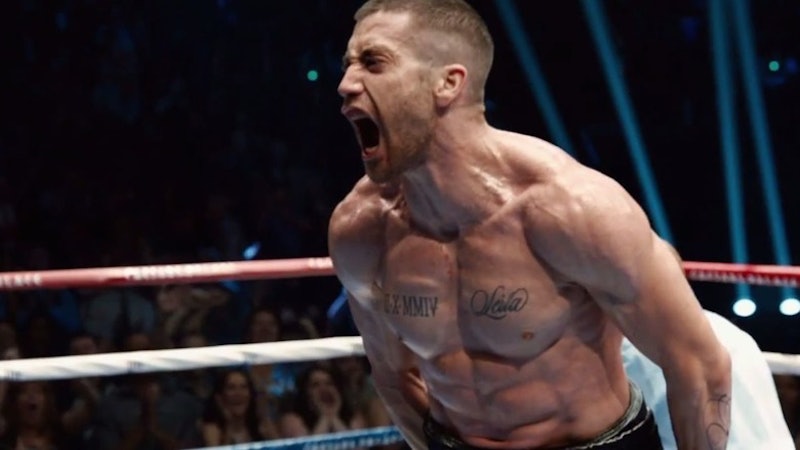 If you’re totally not in the mood for cardio, here’s a perfectly good substitution for that dreaded set of jumping jacks you've been putting off for ages. The Weinstein Co. just released a new trailer for Jake Gyllenhaal’s Southpaw that will definitely get the blood pumping through your veins, requiring absolutely no action on your part — cardio without the work! Southpaw director Antoine Fuqua told Deadline that Gyllenhaal's intense workout regime not only helped prepare the 34-year-old actor for the role of famed boxer Billy "The Great" Hope, but that the daily training "literally turned him into a beast." Based off the explosive nature of this new teaser, that description couldn’t be more accurate.

In the trailer, Gyllenhaal takes his fair share of literal and figurative punches, as his character fights battles in his personal life that rival his boxing opponents' in intensity. From what we know about the Southpaw plot, Gyllenhaal's character is at his wit's end with life and comes dangerously close to losing his grip when his wife (played by Rachel McAdams) is killed. Making matters worse is his tenuous relationship with his adolescent daughter (played by Oona Laurence), who lashes out at her dad with a few frustration-fueled blows of her own.

If it sounds intense, that's because it is — and honestly, several moments are quite terrifying to watch.

When Jake Takes This Blow To The Face

Oof. Who else has an instant headache after watching that?

When He Gets In a Huge Brawl With His Opponent

Easy guys — no one wins a title for this fight.

This Terrifying Moment With His Wife

This is probably the saddest moment of the preview. Unfortunately, things only get tougher from here.

When His Daughter Delivers The Slap From Hell

This looks like a total maniac moment. Seriously, who would be brave enough to fight this guy?

This movie already looks heartbreaking and intense. Now — where can I get my tickets?

Southpaw will hit theaters on July 24.