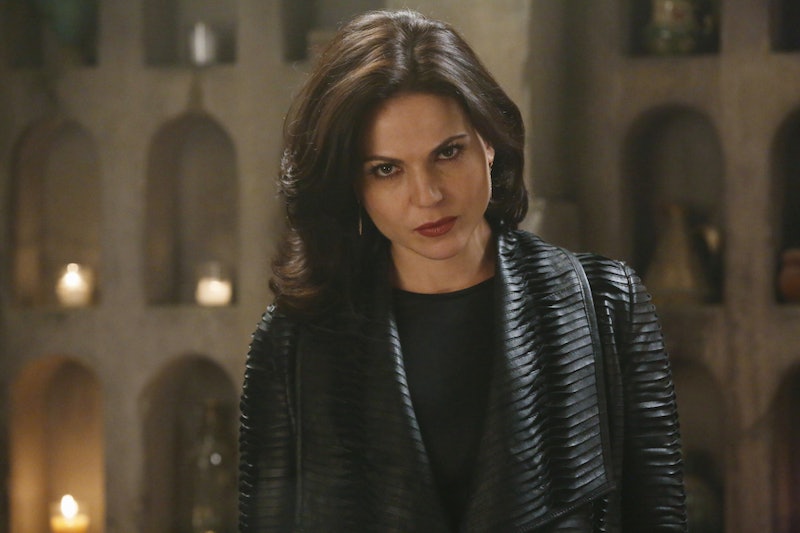 I know we're going back a few years, but something tells me none of us have forgotten Regina Mills's Evil Queen days during Once Upon A Time's first season or so. She was dark and full of vengeance, and there wasn't anyone she wouldn't destroy if they tried to stand in the way of what she wanted, especially when it came to her son, Henry. Since then, we've watched Regina grow and change in ways that not even she could have anticipated, and it's been an amazing story about redemption. It hasn't been easy, and the transformation certainly isn't complete, but it's certainly rewarding to watch.

Thinking back to Season 1, Emma's arrival in Storybrooke was such a pivotal moment not just because she was the Savior, but because she gave Regina something to fight for. Life in Storybrooke prior was humdrum and completely ordinary; she may have been running the town as the mayor, but it can hardly be said that her life was full of excitement. And while it may have taken her a long while to fight for the right things, Regina was always a survivor, and it's safe to say that now she's well on her way to becoming a hero, too.

She'll Do Anything To Ensure Henry's Happiness And Well-Being

While Regina has always loved Henry, she sure had a funny way of showing it for a while there. It wasn't until he rejected her completely that she finally had a realization that what's best for Henry wasn't always what Regina wanted for either of them. Once she started actually putting him first, their relationship grew into a truly beautiful thing. Regina is an amazing mother, which probably shocked everyone — including Regina herself — and Henry is lucky to have her (and Emma, obviously).

She's Learned How To Accept Help

Because of everything she's been through, Regina was understandably a lone ranger for many years. However, as we all know, no one can work alone and sometimes, you've got to be willing to work with someone else — or accept the help they can give you — if you want to achieve something. Regina's stubborn, so it took her a while, but she quickly realized how much better two heads (or two sets of magic) can be than one.

Who would have thought, all the way back in Season 1, that Regina and Emma would end up having what is arguably the most important and rewarding relationship on the show? Well, the Swan Queen 'shippers did, but you know what I mean. By bonding with Emma, Regina not only improved her relationship with Henry, but also finally found the family she'd been craving for so long. She only had to stop seeing Emma as an enemy and find their common ground, and I'm so glad she did.

I might not personally believe that Robin Hood is Regina's happy ending (and she's pretty much said so herself), but the fact that Regina has even allowed herself to open her heart again to someone in a romantic way after all these years is really amazing, and shows just how committed she is to restoring her old self, the self that believed in love.

She Knows That The Hard Way Is Often The Right One

When she was the Evil Queen, Regina lived her life by a law of her own making, doing whatever she wanted, whenever she wanted, to whomever she wanted. She's since learned, however, that just because she wants something isn't enough motivation to take action if it's going to hurt other people. It might hurt Regina in the moment to do the "right" thing, but she now has too much to lose and cares about too many people to put herself first anymore.

She Finally Believes She Deserves A Second Chance

Perhaps one of the most impressive changes Regina has experienced is the one which has allowed her to believe she's actually worthy of a second chance, and to see the difference in herself as she changes her life. She's earned forgiveness tenfold by now, but no doubt she'll continue to try and prove herself to make up for years past.