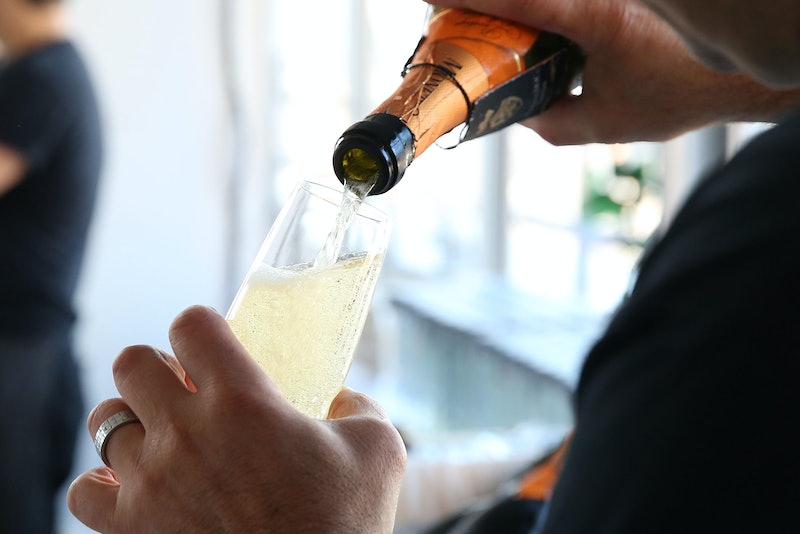 If brunch al fresco and picnics in the park have gotten you excited for Bellini cocktails and summer toasts, you may want to begin looking at prosecco alternatives — the Italian sparkling wine may be at a shortage soon. The rest of the bubbly drinking world has finally caught up to what we savvy (cough, thrifty) consumers already knew: Champagne is expensive, drink more prosecco. And we have — United States exports have increased by 38 percent. But it’s not all simple economics that has driven the price of prosecco up. According to Robert Cremonese, export manager for the prosecco producer, Bisol, heavy rain and flooding have decreased the number of viable grapes to be used, resulting in a lower yield.

Thankfully, prosecco and champagne are not the only sparkling wines available in stores and restaurants. Italy, France, Spain, and the United States produce a variety of sparkling wine varietals. And since we're solution-oriented and not ones to cry in our bubbly, it's time to expand our palates (but not wallets), and seek out prosecco alternatives that will make us wonder why we hadn't explored this territory before. We will survive this time of hardship, you guys. I guarantee it.

Cava, a dry sparkling wine from the Catalonia region in Spain, is made in a similar way as champagne, using the traditional method (méthode champenoise),which allows the wine to go through a second fermentation process inside the bottle. Unlike champagne which goes through this labor-intensive process manually and is more expensive as a result, cava producers use machines which allow for a lower price point, similar to prosecco.

Made from the Spanish grapes macabeu, parellada, and xarel-lo, cava is often described as drier and less fruity than prosecco, averaging around 11.5 percent and 12 percent alcohol. Cava can be sipped on its own, made into sangria, or used as an alternative to champagne in a kumquat ginger mimosa. Pace yourself.

Rosé is the de facto wine of the summer, and is made all over the world: from the Napa Valley in California, to Germany and New Zealand. It's crisp, refreshing, and its fruit-forward taste is compatible with most palates and is the ideal wine to enjoy on hot summer days and nights. Sparkling rosé can be made from Pinot Noir, Grenache, Syrah, and Zinfandel grapes, and can be produced in a variety of styles, from sweet to bone-dry. Its pink tinge, which can range from a light blush to dark pink, is dependent on the wine-making process, but can often be attributed to how long the grapes are left to sit in their skins. Try your next sparkling rosé in a cocktail, with gin, dry vermouth, and rose water. Consider this your upgraded mimosa.

You didn't think prosecco was the only sparkling wine to come out of Italy, did you? I hope not, otherwise you would have been missing out on one of Italy's most underrated wines. Produced in the Emilia Romagna region and made from the Lambrusco grape, these effervescent red wines are meant to be imbibed young and slightly chilled. Lambrusco has gotten an unfair rap in the past for being intensely sweet, and served over ice cubes — but a simple chill in the refrigerator for 30 minutes is plenty. Typically fruity, the Lambrusco of today ranges in sweetness levels, and goes well with grilled meats (perfect for barbecues), pizza, and pasta. Expect to pay no more than $20 for most Lambruscos.