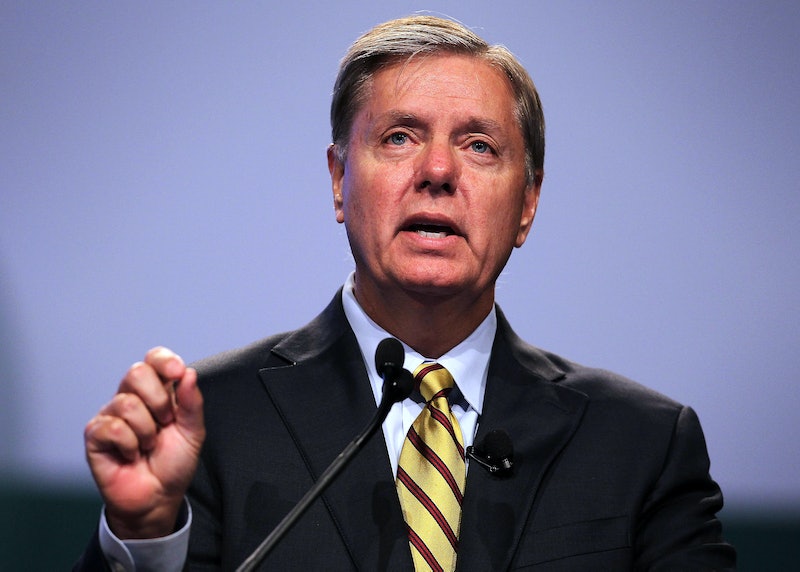 Much has been said about Republican Senator Lindsey Graham's bachelor status now that he's officially announced his presidency. Graham is single and has never been married, which is something of a rarity when it comes to political candidates. America has elected two bachelor presidents in the past, and a few unmarried presidential candidates have also entered the race without a partner.

In 1992, there were three such single candidates: former Nebraska Senator Bob Kerrey, former Virginia Governor L. Douglas Wilder, and current California Governor Jerry Brown, the latter of whom entered the race unmarried and single. Both Kerrey and Wilder entered the race divorced. All three candidates were Democrats and, though they ultimately were not picked as the party nomination, it was Jerry Brown who came the closest. Brown got the second most delegate votes during the primary with 596, though that amounted to just 13.9 percent of the vote compared to 1992 nominee and eventual President Bill Clinton's 78.6 percent or 3,372 delegate votes.

Brown remains politically popular and as the current governor of California has a majority approval rating according to the LA Times. Brown has also spent a majority of his political career unmarried. He and former Gap executive and lawyer Anne Gust tied the knot in 2005. Brown's first government position as California Secretary of State dates all the way back to 1971.

This bodes well for Graham even if he fares similarly and ultimately does not receive the Republican nomination. Graham insists his single status should not factor into his candidacy and at a recent event in Iowa told the Huffington Post that, though he doesn't have a partner, he still has plenty of family. Says Graham:

I feel real comfortable with who I am and the life I've lived. I've got a wonderful, supportive family. And the last time I checked, I didn't see a sign on the White House that said 'single people need not apply,' so I am good to go, I think I'd be a good commander-in-chief and I'd work really hard as president for everybody and for your family.

The South Carolina Senator certainly has a ways to go to even make it to second place by the time the primaries hit, however. According to a Huffington Post aggregate of current polling data regarding 2016 Republican presidential candidates, Graham is at the absolute bottom of the list, polling at just 1 percent.