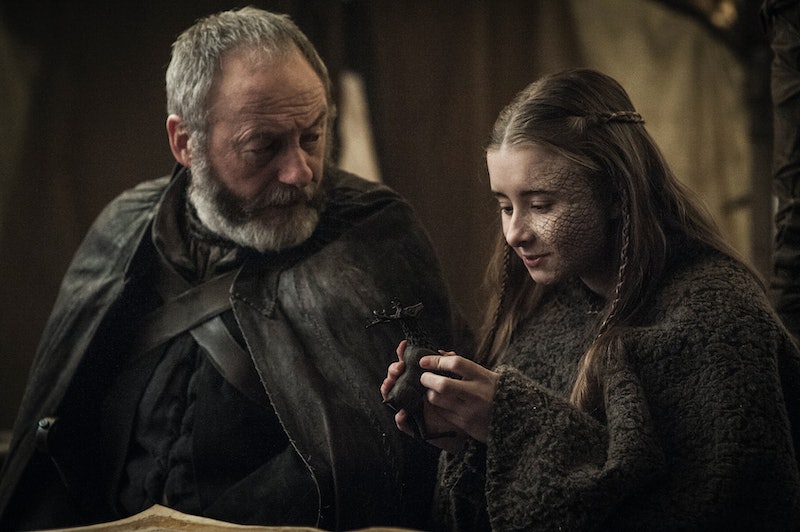 I wasn't entirely sure this would actually happen, but I should have known that while this show does many things for women in power, Game of Thrones is excellent at taking that power right back. And in Season 5, it seems like the series is continually tearing its female characters down. From Dany having to marry a violence-obsessed ruler to get her way, Sansa having to marry and withstand unwanted sexual attention from Ramsay Bolton, Margery in jail for supporting her gay brother, and Arya dealing with clam jokes from every angle while selling seafood in Braavos, it's been kind of a terrible season for women. Now, poor Shireen Baratheon has burned at the stake for her father's strategic shortcomings. And we had to bear witness to Shireen's death and screams and for what? Will it even win Stannis the upcoming battle as Melisandre promised?

Well, unfortunately, if the show follows the books, Stannis has just taken the ultimate risk for no ultimate payoff. In the books, Stannis dies as the battle of Winterfell. Sure, things could change, because the series is clearly playing with the trajectory of the books, but even that jaunt away from Tyrion and Jorah's book plot ultimately led us back to the same thing: Dany riding away on Drogon's back. So I'm betting that no matter what happens, Stannis will die.

And even if he doesn't die, that still doesn't justify Shireen's pain. It's pretty despicable that Stannis is so obsessed with victory that we would actually sacrifice his own daughter on the chance that her blood could save his army. Sure, you could argue that a good leader makes tough calls and does things that benefit the group rather than decisions that benefit themselves, but that's when we're dealing with real world possibilities. Not dark magic. Sure, Melisandre can birth smoke monsters that kill mini-kings like Renly Baratheon, but since when can her magic predict the future?

I understand that this is the world we've bought into, but I had hoped that Stannis might attempt to win his upcoming battle with skill rather than hoping to find a get out of jail free card by — again — sacrificing his own daughter.

I'd like to say that Dany riding away on that dragon at the end of the episode is enough to keep me pumped, but I just can't get over Shireen. And it's pretty upsetting that Stannis already has.