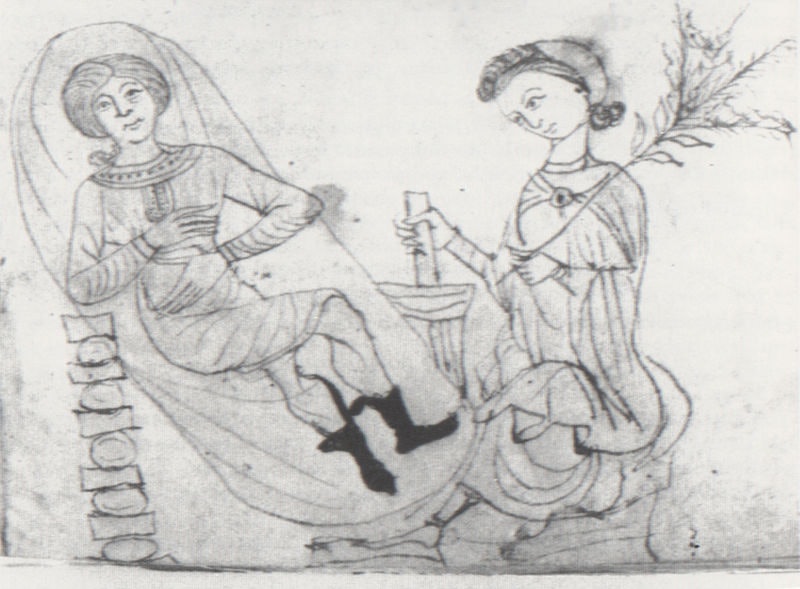 Abortion is both a tricky and a touchy subject. In the midst of fervent pro-choice and pro-life debates today, we can lose sight of the fact that abortion actually has a long medical history. We're by no means the first society to debate the rights and necessities of a mother's control over her pregnancy; evidence suggests that many civilizations in history, from the Egyptians to the ancient Romans and Greeks, had these conversations too. The crucial difference? Those who seek an abortion in modern America can, for the most part, have a safe and successful procedure. Women throughout most of human history were not as lucky.

There's no one way in which history has regarded abortion. Greek writers (all men) had long arguments amongst themselves about the procedure, suggesting that it wasn't uncommon — and scholars of the Qu'ran, which doesn't mention it, have been debating Islam's position for thousands of years. It's when we start to look at medical texts, however, that we start to get a real grip on how abortion treatment must have felt through the ages — and a vision of the terror, pain, and risk that many women endured.

Today, in countries that allow abortion, pregnant women have a choice of different options depending on the law and the duration of the pregnancy, from surgery to pills. These options are painful and not without risk, but they also don't involve, for example, putting dung up your private parts. Through historical perspective we can see just how far we've come, how lucky we are, and how utterly necessary it is to continue the fight for reproductive rights.

(Note that these don't even scratch the surface of all the historical abortion methods around: the ancient Chinese used mercury, and lists of supposedly miscarriage-inducing plants used in the Middle Ages could stretch on for pages. These are just the most spectacularly awful ones.)

The Kahun Papyrus is one of the earliest medical texts in history. An ancient Egyptian creation now in fragments, modern interpreters think it has a specific idea for an abortifacient, or abortion-inducing medicine: crocodile dung. Made into a pessary with dough and inserted into the vagina, it was meant to operate both as birth control and as an inducement for miscarriage. Crocodile dung does have spermicidal properties, but it's likely it was more effective as a contraceptive than an abortifacient.

This is one of the most famous abortifacients in history: a tea made with the herb pennyroyal, or mentha pulegium . Pennyroyal is actually a type of mint, but it's a very successful abortion drug — so deeply poisonous, in fact, that just five grams of it can be toxic. It's been known for such a long time that it's mentioned in a play by Aristophanes, and was probably extremely effective. But its intense toxicity, caused by a compound called pulegone, made it a very dangerous remedy indeed.

3. Stepping Over A Viper

Pliny the Elder wasn't very clued in about women's bodies. (He's the one who thought menstruating women killed bees.) And he had some interesting advice for women seeking abortions. "If a pregnant woman steps over a viper, she will be sure to miscarry,” he advised in his Natural History — which was presumably meant to be an accident, but may have also been a hidden piece of advice. Crow's eggs were also meant to induce miscarriage if you stepped over one. Not very effective.

4. Jumping And Kicking Yourself In The Buttocks

Hippocrates, the famous Greek physician, was largely against abortion, but a text supposedly by him recommended a technique that became popular throughout the ages: "jump up and down, touching her buttocks with her heels at each leap" until the embryo became "loose" and fell out. This later became known as the Lacedaemonian Leap. Agitating the foetus through mild physical activity is not thought to cause abortion. Those poor women.

5. Sitting Over A Pot Of Hot Onions

One very ancient method of birth control can be dated back to an 8th-century Sanskrit manuscript: sitting over a pot of boiling water or steaming onions. According to Kathleen London, author of The History Of Birth Control, this is still in use in some communities in New York's Lower East Side. This is also ineffective.

London also identifies a spectacularly horrible-sounding abortifacient preparation from some point in history, but not where it's from. Probably best not to know, as, according to her, the recipe included "paste of mashed ants, foam from camels' mouths, [and] tail hairs of blacktail deer dissolved in bear fat". This may have worked — particularly if it were inserted into the uterus — because it possibly would have caused a septic abortion via the introduction of infectious bacteria. Which is just as horrible and life-threatening for the woman as it sounds.

The famous Greek doctor Hippocrates, or texts attributed to him, recorded a lot of abortifacients — and, interestingly, his books also reveal that the Greeks had figured out the connection between copper and contraception that we still use today in copper IUDs. But one recipe stands out: It calls for mouse dung, honey, Egyptian salt, wild colocynth, and resin to be made into a suppository and put into the uterus. Septic abortion strikes again: the possibility for infection just skyrockets.

(If wild colocynth doesn't ring a bell, it's a bitter desert plant with a long medicinal history — including being recommended for curing werewolves in the 16th century — and probably worked quite well as an early abortion drug. Why? It made you throw up so hard you'd miscarry. Not pleasant.)

The use of opium as an abortion drug can be traced back centuries. In Contraception And Abortion From The Ancient World To The Renaissance , John Riddle points out an abortion recipe from Scribonis Largus, court doctor for the Emperor Claudius, which involves opium and a bunch of other horrific ingredients. The opium was meant to be served alongside mandrake root, Queen Anne's Lace (a known birth control herb), the gum resin opopanax, and various types of peppers. It would likely work, but the after-effects would not be nice.

Scibonius appeared to think he was writing down a remedy for the suffering after an abortion, but it's pretty clear that the recipe was actually to start the process, not end it. And it's still hanging around: there was a report in 2011 that women in Pakistan are resorting to opium "bombs" in the uterus to help unwanted pregnancy.

9. Being Shaken Or Beaten

Greek physicians had a range of ideas for women wishing to discontinue their pregnancies. Alongside the usual list of abortifacient herbs — like myrrh, rue and juniper — Soranus of Ephesus, now known as one of the first gynecological experts in history, wrote that women also induced their abortions by being "shaken," riding horses, or carrying heavy objects.

This was actually a tricky way out of a dilemma: the Hippocratic Oath technically prevented doctors from helping women to procure abortions, but it only mentioned the more traditional methods by name, so advising them to abort using other tactics (like being beaten) was OK. Right.

As a current horrific case in Texas testifies, serious body injury will indeed cause an abortion — but just being shaken won't do it on its own.