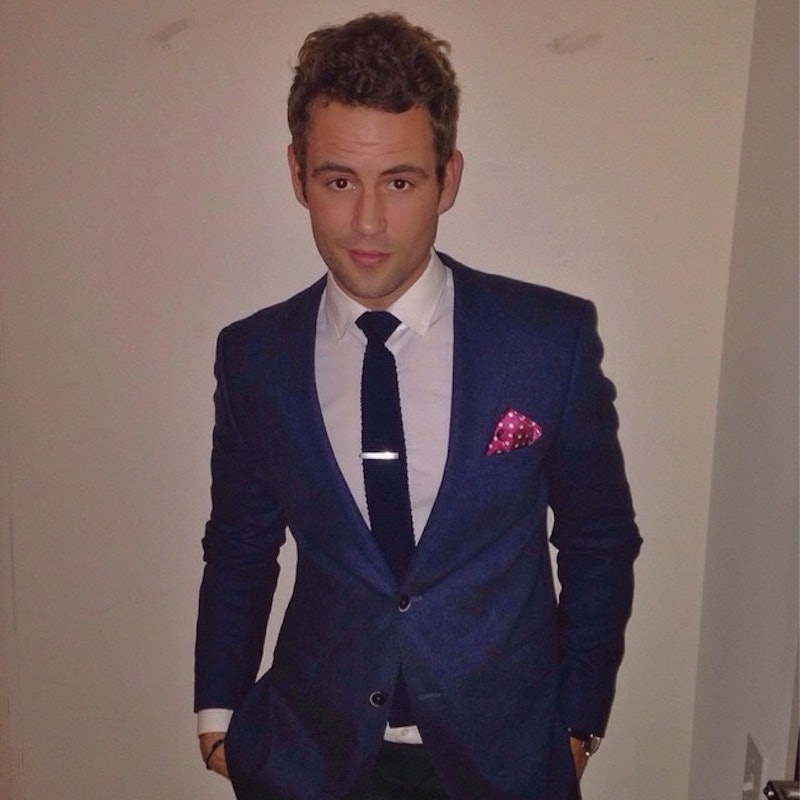 You know how Chris Harrison always tells us that what we're about to watch on The Bachelorette is like "nothing we've ever seen before?" This time, he's actually right. On this Monday night's episode, Nick Viall is joining The Bachelorette to compete for Kaitlyn Bristowe's heart — you know, a month into this thing with no prior warning. And, yes, this is the same Nick who made it to the final two on Andi Dorfman's season last year and didn't exactly take being the runner-up too well. After watching Kaitlyn on The Bachelor — and then, after she became the Bachelorette — Nick decided he had to have a shot with this girl, and the rest kind of speaks for himself. So what's the deal with these two? Are Kaitlyn and Nick actually going to end up together?

Being that I (unfortunately) do not actually know these people in real life and only know what they've chosen to share of their lives and personalities on TheBachelor and The Bachelorette, that's pretty much all I have to go by. But, from what I've seen, I think they're a perfect match. Nick and Kaitlyn are both playful, sarcastic people who can definitely bond over the fact that they took a chance in falling in love with someone on reality TV and it didn't work out the first time. They're totally compatible, and I'm rooting for them. I love them individually, and I have a feeling I'll love them even more together.

Besides, Nick has an advantage over the other guys in the competition: An actual foundation with Kaitlyn. The other guys on the show pulled up in their limos (and/or cupcakes) and introduced themselves to Kaitlyn, and that was that. Anything and everything they know about each other so far has come from rose ceremonies and sumo wrestling contests. But, according to our girl herself, Kaitlyn and Nick developed a friendship after she was on The Bachelor, and on a show like this where finding a partner for life in six weeks is the goal, that can make a huge difference.

We had a friendship before I came on and had that chance of being the Bachelorette, and we had talked a lot and had this connection that we both only understood as a friendship. After I was gone, I guess he was missing that friendship and thinking maybe it was more than just a friendship connection.

You know what they say: No better way to form a lasting relationship than being friends first. Just ask Monica and Chandler.

Nick's biggest issue on the show is going to be getting along with his fellow contestants, because I doubt they're going to take well to the fact that Kaitlyn's letting someone join them midway through the season, let alone someone she has a bit of a history with. Not that I blame them, of course — it is pretty unfair, and I wouldn't be surprised if they felt threatened.

The good news? It's going to make awesome TV. I can't wait!