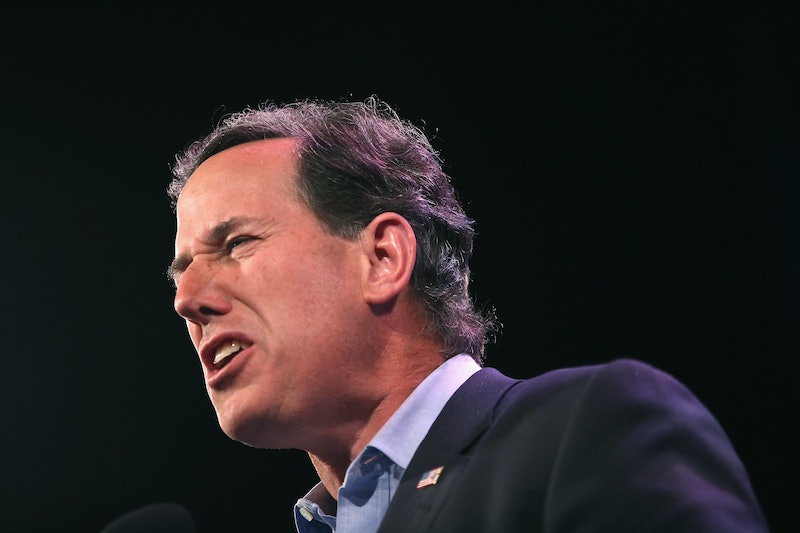 In the wake of the upcoming primary season, there’s one social issue on many women's minds: reproductive rights, otherwise known as the bane of every Republican politician’s existence. From birth control to abortion, it’s become nearly impossible for the GOP to escape it's reputation as an archaic, women-hating party which seeks to abolish any semblance of reproductive rights available to women. Surely, in order to win over female voters (the majority of whom voted Democrat in 2012) the GOP should be starting to accommodate reproductive rights by softening it's overly conservative stance?

In reality, that couldn’t be any further from their approach: out of the 14 candidates currently running for the GOP nomination, all have made no secret of their disdain for reproductive rights, with some even being in-favor of an overt ban on abortion. Yet if the GOP is trying to make itself more friendly towards female voters, surely women should know the truth about the candidates who, if everything goes horribly wrong in 2016, could make it into The White House. With that in mind, here are 11 of the most alarming things GOP presidential candidates have said (so far) about reproductive rights.

1. "It is entirely appropriate that an advocate be appointed to represent the unborn child's best interests in all decisions." — Former Florida Governor Jeb Bush

If his position on immigration reform is more moderate than his brother, Jeb Bush's conservative stance regarding abortion and reproductive rights is nothing short than extreme. In addition to shaming unwed mothers, Bush took the opinion in 2003 that a guardian be attached to the fetus of a disabled, rape victim. Of course, no mention was made of the mother's health. How about an advocate be appointed for her interests?

2. "To be clear, my goal, and the goal of many of those joining me here today, is to make abortion, at any stage, a thing of the past." — Former Texas Governor Rick Perry

Perry has already enforced draconian measures in his state which restrict abortion access, including a mandatory ultrasound law.

3. ''I can’t think of anything more horrible. But, nevertheless, we have to make the best out of a bad situation." — Former Pennsylvania Senator Rick Santorum

That’s just Rick Santorum casually suggesting that rape victims need to make the best out of a bad situation by being forced to keep their rapist’s child. Such a charming man! At least he admits that rape is horrible? That’s better than Todd Atkin.

Ted Cruz took to his Facebook page to decry what he described as a "dark anniversary" and one which has ensured that "more than 55 million lives have been lost to abortion." As expected, no mention was made of all of the women who would have died horrible and painful deaths had abortion not been legalized. Instead, Cruz was busy making it sound like abortion was for many women, something as simple as ordering some food or watching TV. Bored of Netflix on demand? Try abortion on demand instead.

5. "If you felt something incredibly powerful at Auschwitz and Birkenau over the 11 million killed worldwide and the 1.5 million killed on those grounds, cannot we feel something extraordinary about 55 million murdered in our own country in the wombs of their mothers?" — Former Arkansas Governor Mike Huckabee

Did this really happen? Did Mike Huckabee really compare abortion to the Holocaust? Yup, he did. Huckabee didn’t just liken the Holocaust to abortion; he implied abortion was worse. Then again, what can we expect from someone who spares no expense in making transphobic jokes and who slut shames Beyoncé.

6. "The science is settled, it's not even a consensus, it is a unanimity, that human life beings at conception." — Florida Senator Marco Rubio

Actually, no, that's not settled.

8. "It sounds like her answer is yes, that she's OK with killing a 7-pound baby." — Kentucky Senator Rand Paul

For Rand Paul, supporting abortion means that logically, you’re also okay with killing a seven-pound baby. Which is a) illogical, b) plain offensive and c) shows that Rand Paul hasn’t quite understood the concepts of both abortion and interpersonal communication skills.

9. "There is no war on them, the war is on their babies." — GOP Presidential Candidate Ben Carson

Ask Ben Carson for his opinion regarding the war on women and you'll get an interesting answer; it simply doesn’t exist. Why? Because, according to Carson, men give up their seats to women on public transport. Of course, one random act of chivalry results in abolishing hundreds of years of ingrained misogyny towards women and their reproductive rights. If only everything was as simple as that.

One more time for the conservatives in the back, PLANNED PARENTHOOD DOESN’T JUST PROVIDE FUNDING FOR CONTRACEPTIVES AND ABORTION! This hasn’t stopped New Jersey Governor Chris Christie, who is unabashedly pro-life, from defunding Planned Parenthood in his state.

11. "When officers arrest criminals today, they are read their rights. Now if we’re giving criminals their basic rights and they have to be informed of those rights, it seems to me only common sense we would have to do the same thing for women before they make the choice about whether to get an abortion." — Louisiana Governor Bobby Jindal

The Republican Party’s new darling has a history of an unwavering pro-life stance, including signing the Child Custody Protection Act, which would prohibit minors from entering other states (presumably those which are more pro-choice) with the intention of obtaining an abortion; fighting against Planned Parenthood, and even associating women who obtain an abortion as criminals. Jindal isn’t the first and certainly won’t be the last (just take a peak at the other candidates on this list) GOP candidate to paint women who receive abortions as criminals — but comparing abortion rights to Miranda law is just nuts.