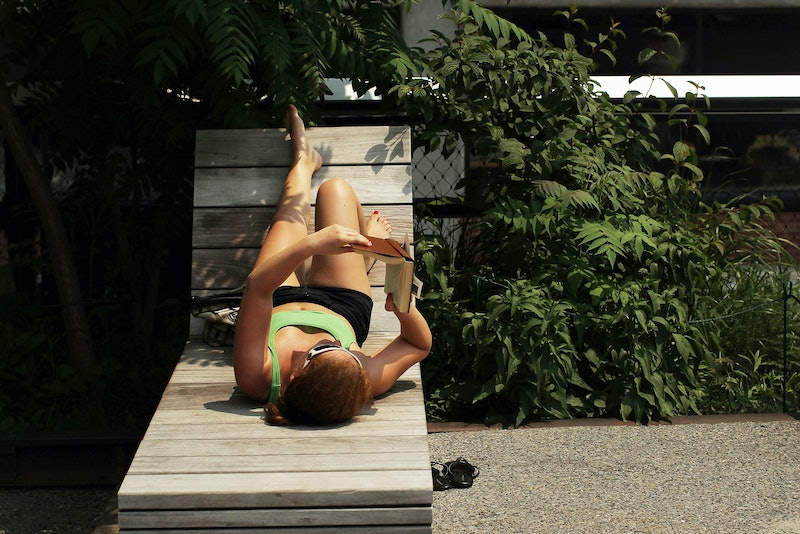 Even with fireworks cracking and booming above, you will want to keep your nose in a good read with all the great July 2015 YA books coming out. Whether you prefer your summer tales dark and thrilling or romantic and uplifting, there is a perfect young adult novel to tote around in your beach bag, your sunglasses acting as your bookmark.

And look, I know first on everyone's list this month is Harper Lee's To Kill a Mockingbird sequel Go Set a Watchman — we've all been waiting 55 years for it, after all — but you'll probably blow through that over one sleepless night. Then, after rereading, you'll still have plenty of time to tackle some YA novels, too.

If you are into literary thrill rides, YA authors are really delivering this month. Maybe you prefer your adventures to be fantasy, shapeshifting stories. Or maybe a pure horror story is more your speed. Maybe lies, deceit, and con artists will make you pull a book from a shelf. No matter what, there's something for you this month in YA. Oh, and don't worry, there's plenty of friendship, romance, and generally uplifting stories, too.

Beat the heat indoors or lather up in sunscreen for beach or hammock reading with these 13 YA novels for July.

If you want your summer reading packed with mystery and conspiracy theories, you can't go wrong with Suicide Notes from Beautiful Girls. Alternating between third and first person, past and present, Lynn Weingarten tells the story of June, who has just found out alongside the rest of the school that her former BFF Delia committed suicide. But Delia's boyfriend Jeremiah doesn't believe it; he thinks she was murdered. Here begins the lies, the deceit, and the roller-coaster emotional reading experience. If you think you couldn't trust anyone in Pretty Little Liars , you have another thing coming here.

Teenage Stephanie, aka "Stevie," is stuck in an eating disorder treatment center in New Mexico desert for 60 days. After the death of her Irish twin brother Joshua in a car accident, for which she blames herself, Stevie figured out a plan for herself: Starve so that she's dead in a year. But when her father committed her to this facility, it makes her plan much harder. Through the treatment for her disease, Stevie looks back at the accident and the events that started it. Meg Haston treats anorexia with grace and raw honesty, focusing on the eye of the storm and not on the recovery, which is far less common in literature.

You and Me and Him by Kris Dinnison (July 7; HMH Books for Young Readers)

As the title suggests, You and Me and Him centers on a love triangle, but it's a bit more unconventional than your traditional set-up. Outsiders Maggie and Nash consider themselves BFF soulmates — the former outcast for being overweight and the latter for being out of the closet. The only thing that can threaten their tight bond is the arrival of the new boy in town, Tom, whom they both fall for. But as the story continues, Kris Dinnison eschews stereotypes and tells an honest, witty, and emotional story about a trio of three-dimensional characters.

This new female-centered fantasy series takes readers back to the late 1800s alongside Louisa Neulander and Dacia Vreeholt, two New York City debutante cousins. But what makes Lou and Dacia different is they are descendants of a shape-shifting family and will eventually learn the ways of being The Claw, The Wing, or The Smoke — aka a wolf, a bat, or mist. The girls learn they must use their new powers to help a Dracula descendant overthrow the Romanian throne. You're going to fall hard for the ornate Romanian setting and the quest of the two girls.

The real-life Great Library of Alexandria is steeped in mythology, having been dedicated to the nine Greek Muses. But, what if the library never burned down, and all of the ancient texts were never destroyed? That's the concept behind Rachel Caine's new series, which pretty much is dedicated to book lovers everywhere. In this rewrite of history, the library has overtaken every city — and it's not a good thing. The library has commandeered all books, making it illegal to posses any personal copies. After all, the owners believe that knowledge is more powerful and worthy than even human life.

There's a little bit of Scandal and a bit of Veronica Mars in Jennifer Lynn Barnes' The Fixer. And if you know Olivia Pope, you know just what a "fixer" is — a shadowy figure who makes people's problems go away, especially when you're living in Washington D.C. and surrounded by political secrets. Sixteen-year-old Tess Kendrick joins her older sister as a fixer in D.C.'s elite high school scene, keeping secrets and telling lies between each other. This high-adrenaline book will have you flipping through the pages even faster than you can binge watch Scandal.

The Heart of Betrayal by Mary E. Pearson (July 7; Henry Holt and Co.)

Finally Mary E. Pearson is giving us the Kiss of Deception sequel we've been waiting for. The Heart of Betrayal picks up with Princess Lia who ran away the day of her arranged marriage. I won't spoil the end of the first book in case you want to catch up — and you should — but Lia is trapped once again, and there are just as many lies and as much suspicion as you've gotten used to in Pearson's fantasy series.

Survive the Night is the name of an all-night underground rave in the NYC subway, but it becomes much more than that when ravers start getting murdered during the party. Danielle Vega has already proven her skill with the creepy in last year's The Merciless , but she's going full-throttle horror for Survive the Night. Teenage Casey and her friends stumble across a party-goer's dead body and realize that the manhole covers have been sealed closed, so everyone is trapped, in the best horror-movie-style way. It gets super, nail-biting scary and a bit gory (so beware), but if you love those thrills, it's an absolute must.

It's a South Bronx summer camp in 1983. If, like me, you hadn't yet been born think: President Regan, crack cocaine, racial tension, political hip-hop music, and the rise of AIDS panic. Raymond "Smiles" King and Guillermo "Nike" Vega are friends and camp counselors, bound together by a love for hip-hop music and break dancing. But there's tension rising between them; Smiles will leave Nike behind in the fall for a fancy private school. The story is as vibrant as it is though-provoking, littered with '80s-era b-boy and Puerto Rican slang that gives it an extra authenticity.

About a Girl by Sarah McCarry (July 14; St. Martin's Griffin)

About a Girl may be the third and final book in Sarah McCarry’s Metamorphoses trilogy, inspired by the original Ovid text, but even if you aren't caught up it's worthy to be read as a standalone. McCarry's novel has the distinction of being the first ever mass-published YA lit cover depicting two girls kissing, but the story is as much about family bonds as it is about sexual identity. Based loosely on the story of Jason and the Argonauts, About a Girl follows teenage Tally who is on the search for her missing mother. Instead she finds the mysterious Maddy who might have the answers she's looking for.

Another Kind of Hurricane hits shelves almost exactly 10 years after Hurricane Katrina ravaged the Gulf Coast. Tamara Ellis Smith's story centers on two different 10-year-old boys: a black boy who lost his Baton Rouge home during Katrina and a white boy in Vermont who just lost his friend in an accident. Serendipity and a lost marble bring the two young boys together in this middle grade novel, where they are able to bond and help each other heal. It might be MG, but the emotions and poignancy in its pages will have people of all ages tearing up and finding hope.

Pretending to Be Erica by Michelle Painchaud (July 21; Viking Books for Young Readers)

Violet's Vegas con man foster father Sal raised her to follow in his footsteps. To commit a perfect crime, he has prepped Violet both physically (seriously, plastic surgery and all) and mentally to step into the shoes of Erica Silverman, an heiress who was kidnapped when she was 5 years old. The reason? If Violet can "become" Erica, Sal is one step closer to getting his hands on the $60 million Silverman painting. The story becomes a true thriller as Violet/Erica struggles with her multiple identities and you'll be white-knuckled as she walks the fine line, trying to avoid making any mistakes that might out her true self.

All We Have Is Now by Lisa Schroeder (July 28; Scholastic)

Armageddon is coming for the U.S. Northwest. In All We Have Is Now, two homeless teenagers wander around Portland, Oregon, waiting for an asteroid to hit in the next 24 hours. Rather than flee, as most other people have, Emerson and Vince decide to jump from a bridge. But then they find Carl, a man determined to fulfill people's wishes before the end, and Emerson and Vince join the mission after Carl gives them his entire wallet full of cash. Rather than a melancholy end-of-the-world story, Lisa Schroeder's story is full of life and hope, and heck it's even heartwarming.