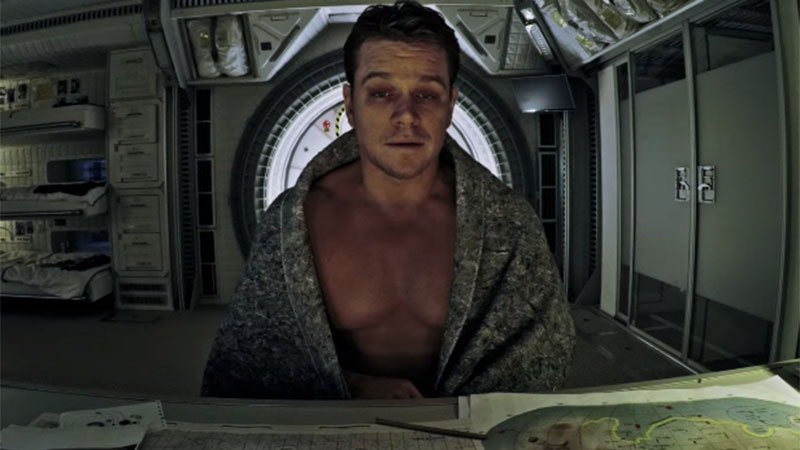 Holy smokes. The trailer for Matt Damon's new movie The Martian dropped on Monday, and it's just an intense as you'd imagine, given that it features the actor after his character is stranded on Mars. Yeah, it's that intense. In the film, Mark Watney (Damon) is presumed dead following a NASA mission to Mars. As we find out, the astronaut is still, in fact, very much alive — but only has enough provisions to last him 31 days. (Also, he notes that a rescue effort will take four years to reach him.)

Watney steps up to the plate, as the three minute long trailer shows him making the most of his resources to grow enough food to last himself four years. Oh, did I mention that, although he's recording video logs, he admits he has no way of contacting NASA? I warned you it would be intense.

Highlights from the trailer include the star-studded cast (Jessica Chastain, Kristen Wiig, Kate Mara, Michael Peña, Jeff Daniels, Chiwetel Ejiofor, and Donald Glover), as well as Watney's sense of humor in the face of one seriously depressing situation.

The Martian doesn't hit theaters until November (I know, so far away!), but you can check out the most intense moments from the trailer below.

1. This Epic Shot of the Astronauts

2. Mark Watney Gets Stuck in the Storm

OK, this looks seriously severe. How could anyone survive this?

3. He's Presumed to be Dead

Don't give up hope, guys!

"This is Mark Watney, and I'm still alive. Obviously."

5. There's Hope That He Can Sustain His Resources

6. Leaving No Man Behind

They're coming to get you, Watney!

7. Just a Gentle Reminder That Rescuing Watney Is Mutiny