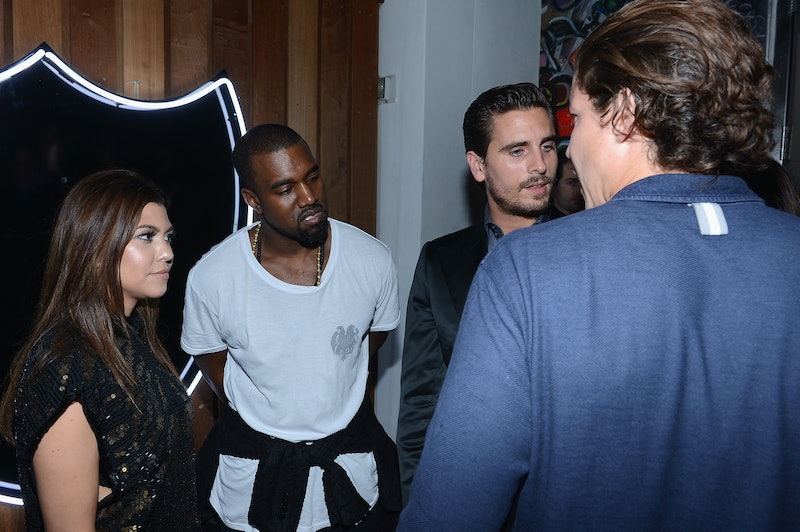 The moment has finally arrived—Scott "The Lord" Disick and Kanye "Yeezus" West are hanging out without their Kardashian baby mommas. The two self-proclaimed deities and lovers of fashion and luxury joined forces today for a special "Boys Only" outing to Maxfield's in West Hollywood (to no doubt stock up on some serious designer goods). While Kim Kardashian was posting photos of cute-as-hell baby North on Instagram, the Kanye and Disick went shopping and stocked up on designer duds from the likes of Balmain, Givenchy and Yves Saint Laurent at the upscale store.

Disick and West have a couple of the most carefully nurtured and extremely ridiculous public personas in all of entertainment and Hollywood. (Which I guess is important when you're linked up to reality TV's royal family.) So naturally the idea of the two of them hanging out, sharing war stories about being new dads and dating Kardashians, and asking each other for fashion advice makes our minds run wild with possibilities. Which led me to this post and imagining a conversation The Lord and Yeezus would be having while perusing the well-stocked men's section at Maxfield's:

Kanye West and Scott Disick just rolled up (pun intended) to Maxfield's in Scott's Rolls Royce. Chatting away and with security in tow, they enter the store (which was conveniently emptied of other customers before their arrival) and begin perusing the merchandise.

Kanye: This selection is on point—it's almost like I handpicked it all myself.

Scott: Yeah, man. This Balmain slim-fitted shirt has "The Lord" written all over it.

Kanye fiddles with a Givenchy sweatshirt that Ricardo Tisci obviously designed with him in mind.

Kanye: Listen Scott, we should probably talk a little bit about your personal style. I'm not trying to tell you what to do, but you should probably let me look into your wardrobe if you wanna hang with me publicly.

Scott: Look, no disrespect my future brother, but The Lord has his style down to a science.

Kanye: Whatever you say, man. I just think you'd benefit from adding some of these YSL leather pants and this Rick Owens parka to your fall/winter '13 wardrobe.

Kanye motions for the extremely intimidated sales rep to come over. (He's scared because he recently saw the episode of KUWTK on Netflix where Scott stuffs a $100 bill in a waiter's mouth and tells him to "STFU".)

Kanye: Do you think you can pull a bunch of tops and bottoms in muted colors for my brother here?

Scott: Seriously, man? Kris tells me what to do all the time: "Get a job, Scott," "Treat my daughter like a princess, Scott," "Grow up, Scott." I'm my own person. -Muttering under his breath- Why is Kourtney the only person that understands that?

Obviously there's no stopping or saying no to Kanye so Scott finds himself in the dressing room with an excessive amount of black, gray, and navy.

Scott: -Shouting out from behind the curtain- Okay, really, what the hell am I supposed to do with this leather shirt and pants combo. It's like, 75-degrees all year-round in California.

Kanye: Trust me, man. Style doesn't care about the weather.

Scott: Kanye, I don't want to offend you or anything because it's really fun having another guy around that feels my pain and who isn't Rob, but none of these clothes work for me. I'd prefer to stick to my tailored suits and frat-boy Sunday's best —

Kanye cuts him off.

Kanye: I like hanging with you too, bro. And I'm gonna let you finish telling me about how much you love your pink dress pants, but this Givenchy sweatshirt will be the best item of clothing of all time if you add it to your closet.

Scott: Actually, what I was going to say was that I don't think I have a single watch that would match these outfits you're picking out. And I own a lot of watches so I'm not about to walk around like a peasant without one just so I can wear this blue velvet blazer.

Kanye: I was just trying to help you out. No disrespect to your Atelier gator-skin loafers, but I think you should consider an upgrade that's all.

Scott: I think I'm good. I am going to buy this Libertine cardigan, though. Do you think we can stop at Hermes on the way back to Calabasas?

The two fist-bump and Scott pays for his new "edgy" cardigan. The two walk back to the Rolls and check their phones, apparently Kanye missed a wedding planning meeting and Scott has to get home because he's got a Christmas photoshoot with Kourtney and the mini Disicks.

Scott: It's a hard life to live among mortals...