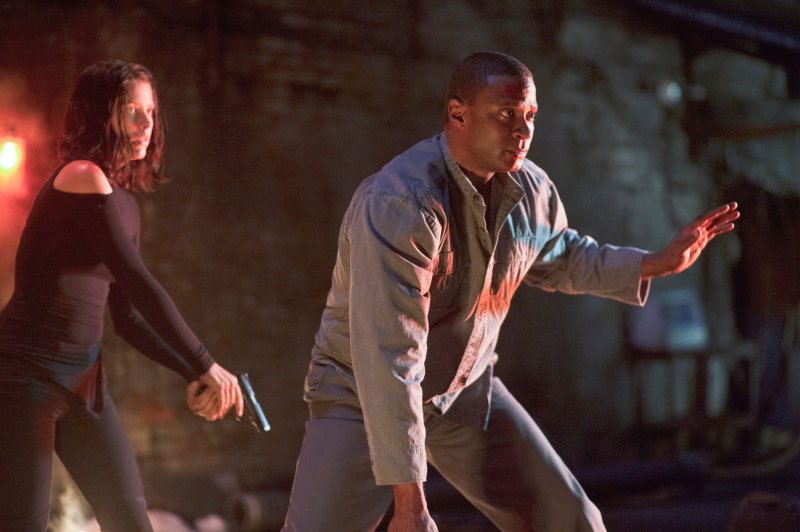 This week's episode of Arrow, "Keep Your Enemies Closer," took us on a superhero road trip — and by "road trip," I mean globetrotting jaunt to Russia. Here's the setup: Diggle has a complicated past that involves an ex-partner/ex-wife who has been captured and imprisoned in Russia. She needs rescuing and everybody wants to tag along.

Officially, the main plot of the episode is about Diggle rescuing his former lady love, Lyla, and all the hubbub that goes down with that plan. (Mainly, Diggle and Arrow rescue Deadshot from the prison in the process and let him leave, but not before he shares some awe-worthy info about Diggle's brother: He wasn't an accidental casualty; he was the target Deadshot was paid to take out.) But really, "Keep Your Enemies Closer" was about the ladies in Oliver's life (particularly one enemy whom he gets very close to). Yep, this was a girl power episode of Arrow (featuring exactly zero Laurel).

Does Felicity have a crush on Oliver? Probably. Can you see his abs and not develop a little crush? Is she sleeping her way up the corporate ladder? Certainly not – but that's what feisty femme fatale Isabel Rochev insists is happening. How else would an IT gal like her get promoted to executive assistant of the CEO? (Extremely against her will, you might recall.) Romantically or platonically, Felicity cares deeply about Oliver, which is why she gets so upset when the following happens…

Despite their animosity and constant bickering, Oliver and Isabel bond over alcohol and the fact that they can both speak Russian and have been very lonely. It's apparently a very sexy combination, loneliness and Russian-speaking, because they sprint to bed and consummate their mutual dislike for each other. Oliver tells Isabel that he doesn't have much time. She promises to make it fast. Ah, the romance. She slinks out just as Felicity knocks on the door and makes it as awkward as she can by being mega-braggy, since she's convinced Oliver only came to Russia as an excuse to boink Felicity in the first place. What's a great, one-sided victory.

Ladies ruled in the flashbacks, too! In this week's island flashbacks, Oliver is captured by Dr. Ivo, only to spot Sara, who he was super sure died. She warns him not to tell Ivo his real name, so Oliver lies and says his name is Tommy. Later, she warns him not to let on that they know each other at all, explaining that she has no choice but to work with them since they found her after the boat wreck. She helps him get to a radio to make contact with his friends (who he told his captors were dead) and then… betrays him. Yep. No wonder he wasn't up for letting the Lances know she was alive. She does, however, talk her boss out of killing him. Instead, they send him back to the island. It's a wonder Oliver ever made it back to Starling City at all.

In less Oliver-related news, Moira's attorney tells Thea to break things off with her super bad boy boyfriend, Roy, because dating a convict is sure to equal bad press and public opinion when it comes to her mom. Thea is pretty torn up about the idea, but actually puts someone else first for once and tells Roy that she can't keep seeing him. When Moira finds out, she pulls a supermom move and calls Roy to the prison to visit. (Conveniently, she must have known his number and put him on her visitation list, even though she says she's meeting him for the first time, but we'll let that logic hole slide because it's a nice moment.) And then she cutely forbids Thea from not seeing him.

What did you think of tonight's Arrow?