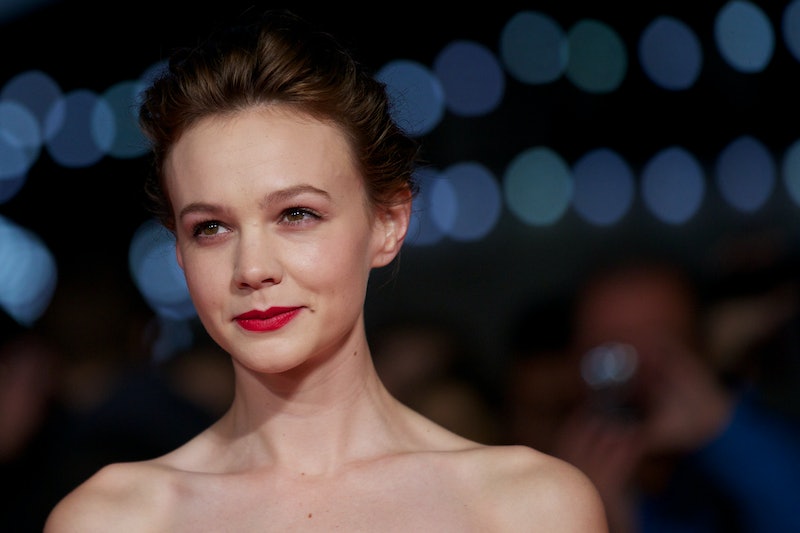 Break out the balloons, cake, and lullabies, because according to Us Weekly, Carey Mulligan is pregnant with her first child with husband Marcus Mumford. On Sunday, the two were spotted at the 2015 Tony Awards, where Mulligan was nominated for Best Performance by an Actress in a Leading Role for her work in the revival play Skylight. Even though she lost out to Helen Mirren, Mulligan's reported pregnancy seems like award enough. Bustle reached out to Mulligan's rep for comment, but has not yet heard back.

Per a source who spoke with Us Weekly, "They [Mulligan and Mumford] weren't planning on announcing, but she hasn't stopped working. Everybody around her is being very supportive. The show ends soon and they're going back to England after."

The Great Gatsby actress and lead singer of Mumford & Sons married in April 2012 in Somerset, England, but have remained private about their relationship. As Mulligan told Vogue in 2015, "Like anyone, you try and split your time evenly. Marcus is the only thing that's mine that I can keep away, so I try to."

With that said, just like they keep their marriage and personal lives to themselves, the same will probably go with their alleged pregnancy. When you're in the spotlight like them, can you really blame them for doing so?

Also, if they are indeed expecting their first child, can you imagine how talented their kid will be? Between Mulligan's acting skills and Mumford's singing expertise, their child will no doubt take the world by storm. Congrats to both if this exciting news is indeed true!