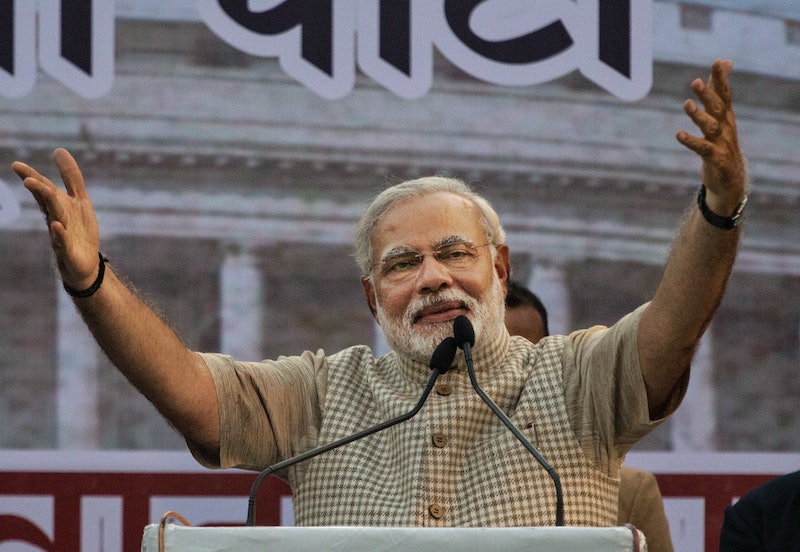 Indian prime minister Narendra Modi found himself in hot water today after news broke this morning of him giving a speech in which he commended Bangladeshi Prime Minister Sheikh Hasina for her firm stance against terrorism. The problem? He praised her for doing such a good job, “despite the fact that she is a woman.” That “thudding” sound you hear is a thousand heads meeting a thousand desks. Unsurprisingly, the speech has already inspired an angry backlash and a viral hashtag, #DespiteBeingAWoman.

Modi gave the speech on Sunday at Dhaka University, during a state visit to Bangladesh. In what The Washington Post has dubbed “the world’s worst compliment,” Modi said, “I am happy that Bangladesh Prime Minister, despite being a woman, has declared zero tolerance for terrorism.” (Modi spoke in Hindi. The line has been translated in slightly different ways, but the general sentiment of “despite being a woman” seems to hold throughout). What exactly he means here isn’t quite clear. Is he implying that it’s unusual that for a woman to be against terrorism? Or that it’s unusual for a woman to be a capable Prime Minister at all? However you read it, that “despite” doesn’t look good.

The Post points out that, in the past, Modi has had a fairly good track record when it comes to women. During his Independence Day speech last August, he spoke out firmly against rape, telling parents that it is their responsibility to raise sons who don’t sexually assault women; he’s also taken a strong stance against female feticide. Regardless of these past statements, the “despite being a woman” comment is drawing fire for being condescending and sexist. Twitter users are using #DespiteBeingAWoman to express their ire, often with a heavy dose of sarcasm:

The Bharatiya Janata Party (BJP), the political party with which Modi is associated, has risen to the PM’s defense. According to The Economic Times, BJP leader Shaina NC said, "He (Modi) said it is such a herculean task to fight terror and for a woman it is even more difficult. It was the biggest compliment he was paying to Hasina. She has taken it as a compliment.” Modi’s supporters have fought back with the hashtag #ModiEmpowersWomen, citing his efforts to end rape and female feticide.

More like this
Women Around The World Are Cutting Their Hair In Solidarity With Mahsa Amini
By Darshita Goyal
Black Women's Equal Pay Day Highlights An Upsetting Problem
By Brandi Neal
On TikTok, Tinned Fish Date Night Is The Latest Viral Food Obsession
By Emma Carey
Chelsea Clinton On The Best Advice She Ever Got From Her Mom
By Brianna Kovan
Get Even More From Bustle — Sign Up For The Newsletter