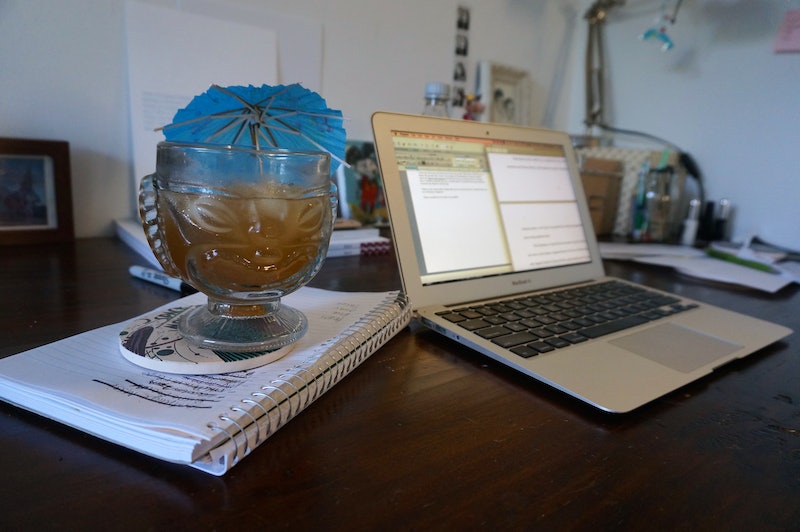 There's a quote that's often attributed to Hemingway: “Write drunk, edit sober.” The truth is that these are not actually Hemingway's words — thanks, Internet! — but you'll see them around everywhere, and plenty of writers use them as an excuse to pour a glass or nine and hit the keyboard to find their inspiration...much to the chagrin of basically everyone who has to edit their work.

I decided to see if this advice holds any water. After all, it can't just be a fun slogan to print all over stuff on Etsy, right? Or, well, maybe it can.

Ironically, in all my years of school, I tried to avoid writing drunk altogether; if there’s one thing I took away from writing classes, it was DON’T DRINK AND WRITE. In fact, during my MFA program, we had a seminar about the joys of staying sober while writing. I wasn't even sure if I could drink and write. I never tried writing drunk in fear that I would self-destruct, or worse, write the next worst American novel. Well, until now. Here's what I tried...and what I found out. (Spoiler alert: This is not as easy as it looks.)

During this experiment, I worked on an existing novel, and tried to add new chapters, plus add to existing ones. My goal was to write at least 1,000 words each night and spend a few hours in front of the computer editing the next morning.

When I was sufficiently buzzed on mai tais, I started writing. At first, it seemed like I was on fire. I was writing so quickly (and so efficiently!). Sometimes I write with music very low in the background, but now, with my cool buzz, I was blasting the radio so loud that I must have annoyed the neighbors. I found myself getting out of my chair and fist pumping to Kelly Clarkson. Sometimes I get up and pace around the house, but as I kept drinking, I found myself dancing around the house. So, while I was writing quickly, I wasn’t focused, and I was so easily distracted. For example, my fiancé was making a grilled cheese sandwich, and sure enough I started writing about said sandwich.

Normally, on a good day, I get to about 1,000 to 2,000 quality words. Most of which are useable after some careful editing. On the first day of this experiment I hit a whopping 3,000 words! And I was burning calories by doing high kicks all over the living room. Was I distracted? Yes. Was I efficient? At the time, I thought so. Did I hit my word count goal? Yes!

I woke up with a major headache.. which is usual for me because I’m not that great of a drinker. I popped a few pills and started to unravel my drunk words. Okay, they weren’t that bad. But the real problem was that the sentences, the plot points, the characters, were all over the place. Sentences were not thoughtful. I found that out of those 3,000 words, only 500 (or fewer!) were usable. So that really efficient cranking out of words the night before was kind of a waste. Oh, and I definitely got rid of the protagonist searching for a grilled cheese section.

I also kept notes of my experience from the first night...and I still have no real idea what they mean. Like, what did I mean about Beyoncé? I bet it was good.

I was really dreading the second round of drinking because, while the first day seemed fun, it was pretty much a waste of time. Alas, I opted for strong beers and drank them slowly. Instead of blasting the radio, I chose one of my favorite writing records. Lately it’s been Jackson Browne. Which until I started really getting drunk, I forgot that the album is quite sentimental to me. Day 2 consisted of melancholy drinking and a quiet pity party. This affected my characters. They too took on a sad disposition, and I could tell my writing was melodramatic. Did that stop me? Nope. Did I keep writing soap opera–esque chapters? Sure did.

I went back to writing and found myself making more notes, instead of actually writing. Sometimes that is a useful exercise for me. While I was drunk, it felt like these sentimental notes on Post-its were really going to mean something to me in the morning.

Headache again, but not as bad as first day. Ate a big breakfast and really intended to focus on editing — which is obviously THE HARDEST PART OF WRITING. Surely I could do this part well sober. Sober or not, I was foggy and tired. I had no interest in editing anything. I did, however, have a good time reading the sappy notes. I kept a few lines that had some potential, but couldn’t use the rest. Some notes were actually fruitful, and there was one idea that may actually make its way into the book. However, I’d like to think it would have happened like that anyway, not because I was drunk. There wasn’t much to edit, so I played on Twitter and Facebook for a while before doing real life things, like work.

The thought of drinking for three days in a row made me feel like I was 19 again. I felt old and battered by Day 3 and dreaded the bottle, my novel, and this entire experiment. But still, I hit the tequila and went for it. I worked without music at all, which my friends, if you are a drunk writer, THIS IS THE WAY TO GO.

I felt more focused and cranked out a lot of work. Because I ended up working the longest on this night, I could feel my buzz wearing off. I tried hard to keep it steady, but after awhile, I just didn’t have it in me. I called it quits when my eyes were closing at my desk. I did take a few notes. Mostly I drew a few pictures of my novel’s characters. I do this sober, too, so this isn’t a drunk problem.

I thought Day 3 was the best. I had a good chunk of writing that, after heavy edits, could stay in the novel. I also found that I polished up a few things in existing chapters, that were, for the most part, good decisions on my part. Go me! I was so jazzed that I even worked out after, to prepare myself again for another night of drinking.

I even tried writing an entirely new chapter, one that I had not even thought of yet, in an overambitious drunk haze. I felt like I had mastered drunk writing, however, I was not focused and feared what the next morning would bring.

That lost chapter won’t make it into the book. There were a few good sentences there, but ultimately it does nothing for the book, so I cut it. The sentences were so choppy, just like my mood when I wrote it. Again, I found I made a few key additions or changes to existing chapters (maybe I’m a better drunk editor?!) and those were useful.

Nope. Can’t do it. Four days is enough. I need a break from drinking and writing.

Not worth it, really. Don’t do this unless you are a highly qualified functioning alcoholic — which, of course, I hope you’re not.

Whatever mood the booze put me in was reflected on the page...which is, naturally, useless, especially if you need the clarity for a novel. And editing hungover? It was like taking a test you didn’t want to take! I missed many grammatical errors and continuity errors because I wasn’t on the top of my game. Would you go to work drunk? Probably not.

So y'know, good for the good ol' boys who allegedly got slammed and wrote those masterpieces, but I can’t do it. However, I have a feeling that a lot of their best work might have happened when they were sober. Jussayin.