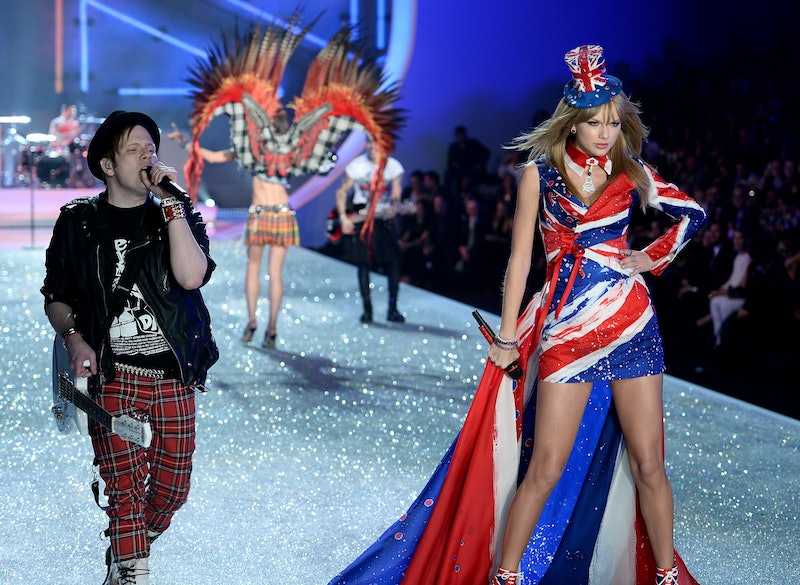 Wednesday night at the 69th Regiment Armory in NYC, everyone's favorite self-loathing-inducing night of the year kicked off for its pre-taping — that's right, the 2013 Victoria's Secret Fashion Show just happened. The "sexiest night on television" featured six themes during the fashion show: Snow Angels, Shipwrecked, Parisian Nights, Pink Network, Birds of Paradise, and British Invasion... which leads us to the inevitable discussion about the night's big performer, Taylor Swift.

Swift paraded down the runaway during the show's opening performance showing off her toned and obviously VS-approved 5'10" frame in a mini dress, complete with billowing train, and a top hat featuring a distressed Union Jack. Naturally, we have to wonder if this has anything to do with ex boyfriend Harry Styles.

We all know that Tay Tay isn't over her One Directioner ex because, who could be? Kid is fine. But we might need to be concerned for Taylor Swift's wellbeing after her outburst at the VMA's and now her blatant statement of, "Hey, I'm hot enough to be in the Victoria's Secret Fashion Show. Look what you're missing, Harry." She may not be over it and it's possible she's making wildly elaborate statements about it on national television. Swift's a fan of grand messages and I happen to think this outfit screams desperation almost as loud as she shouted her expletives at the VMA's.

Swift announced in late October that she was back in the studio, so we're already waiting on the Harry Styles-inspired break-up song to add to our playlists made up of the John Mayer, Jake Gyllenhaal, Joe Jonas, and Taylor Lautner break-up songs.

Girl, we're sorry for your loss and don't blame you for not being able to let it go, but this is just taking it way too far. Leave the Brit-pride to the real life Brits. Please.