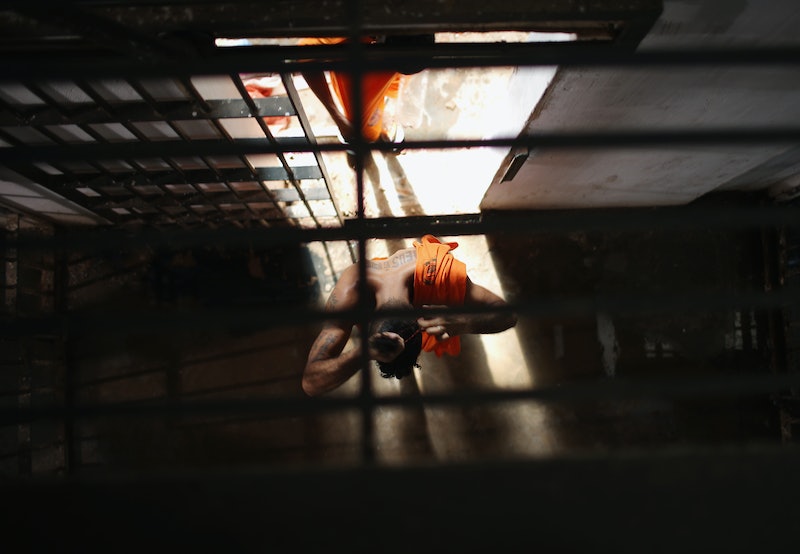 Imagine spending three years in jail — without ever having stood trial. That was Kalief Browder's reality, and on Saturday, he killed himself. More than 1,000 days passed while Browder sat awaiting a trial for a crime he said he did not commit, and his death marks a critical commentary of what it's like to be a jailed youth in the United States and what it's like after you're released. So who was Kalief Browder?

In early 2010, Browder was arrested in the Bronx, New York, for allegedly stealing a backpack. The then-16-year-old maintained he, along with his friend who was also arrested at the time, were innocent. While his friend posted bail, Browder and his family couldn't afford the $3,000 so the teen spent the next three years at Rikers Island.

Much of that time was spent in solitary confinement — 400 days to be exact, according to NPR. In 2012, while Browder was still in jail, the American Civil Liberties Union and Human Rights Watch released a report that outlined the damaging effects of solitary confinement, which included mental and physical health problems, and how the practice often worked again teens' rehabilitation. Browder was also involved in violent scuffles — with both prison guards and other inmates, according to video clips released to the public. Browder attempted suicide several times while at Rikers and claimed guards punished him by withholding his meals.

In January 2013, Browder was offered a plea deal that would have sentenced him to time served. If convicted, he could have faced another 15 years. Insisting on his innocence, Browder refused the deal. But in June of that year, the charges were suddenly dropped and he was released.

Browder first came to the national stage in 2014 after The New Yorker published a haunting profile of him and his ordeal. The magazine also broke the news of his death Sunday. The outlet reported Browder attempted suicide again six months after he left Rikers and was taken to a psychiatric ward. Over the months, he returned to community college in the Bronx after an anonymous donor offered to pay his tuition, The New Yorker reported, but things seemed off, even as recently as this past week, days before he took his life.

Browder's story offered a detailed look at inside one of the most notorious jail complexes in the United States — in fact, Mother Jones ranked Rikers one of the top 10 worst prisons in the country. Rikers' reputation for prisoner neglect and abuse came to the forefront after The New York Times reported the prison housed a "deep-seated culture of violence" for its youth inmates.

This revisit to Browder also shows how little the country has accomplished in reforming its correctional procedures. Already Democratic presidential candidate Hillary Clinton has campaigned for a complete overhaul of the country's policing policy and incarceration system. Browder's story, and countless others, show that even after you leave prison, what happened behind bars never quite leaves you.