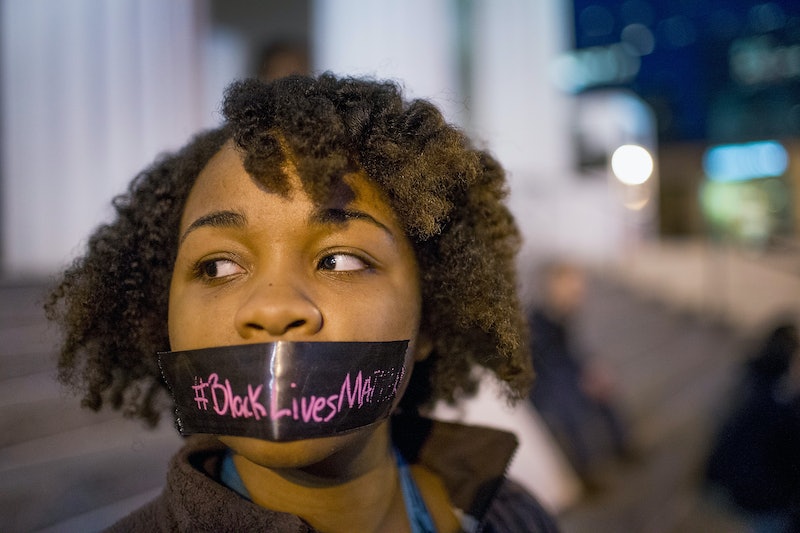 Hundreds gathered Monday evening to protest police brutality in McKinney, Texas, the Dallas suburb where an officer's forceful attempt to break up a pool party went viral. The peaceful protests snaked through the Craig Ranch neighborhood where the incident occurred, as participants called for the involved officer's job and highlighted the use of excessive police force against black teens.

In the video of Sunday's incident, a 15-year-old girl was shown being thrown to the ground by Corporal Eric Casebolt, who grabbed her by her hair and tossed around the teen, who was still clad in a bikini, like a rag doll. At one point, Casebolt put both of his knees into her back to subdue her. Casebolt has been placed on administrative leave and has not commented on the backlash.

The footage caused outrage on the Internet and, evidently, on a local scale. Around 800 protestors joined the March for Justice, which was organized by activist group Next Generation Action Network. A separate march was planned for the same evening, but according to their Facebook the Olinka Green Defense Committee joined forces with Next Generation to show support for the girl's family, who planned on protesting at the March for Justice. Protestors marched from Comstock Elementary School to the pool where Sunday's scene played out.

Derrick Golden, a McKinney pastor who spoke at the event, told the crowd that this extended beyond race. "This is our city," Golden said to the The Dallas Morning News. "The issue we have in McKinney is not only a racism issue it’s classism issue."

The protest remained peaceful, even with some positive (!!!) interactions between police and citizens.

And yes, some police do have horses in Texas. Go ahead and get it out of your system, people. They don't use them all the time.

Protests in Baltimore and Ferguson have brought increased awareness the excessive use of violence against black Americans, but they've also brought out a much smaller group of people who are committed to standing with the police. These "back the blue" protestors made an appearance in McKinney, but appeared to be grossly outnumbered and largely ignored.