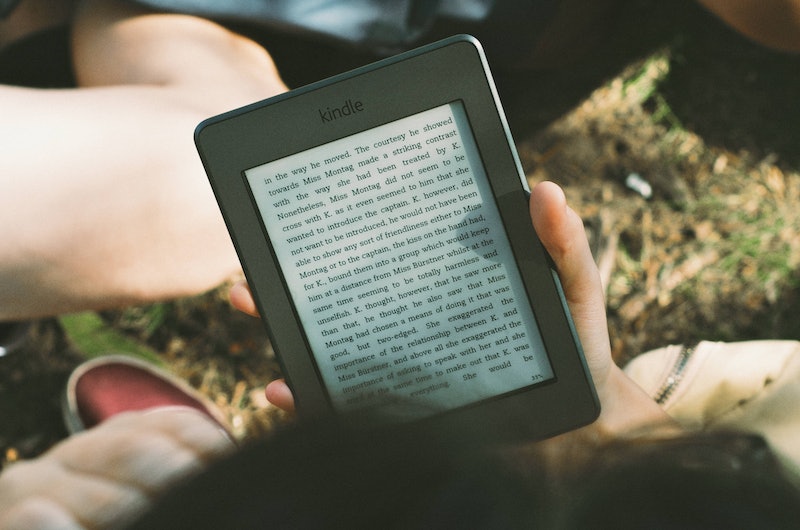 July may mark summer reading season’s peak, but don’t think that means you’re beholden to either syrupy stuff you don't really like, or that you need to keep on slogging through War and Peace, which you actually believed you’d get through this summer. This list of July 2015's best books is where the party is.

At the risk of sounding like SNL’s Stefon, this month has it all: compulsively readable books (check out Amanda Coe’s The Love She Left Behind); weighty books (Maggie Mitchell's thrilling Pretty Is) that won’t weigh down your mood; and, in a category all its own, Harper Lee’s new novel, Go Set a Watchman. So, you’re set.

First up on my July to-read list is Julia Pierpont’s quietly impressive debut novel Among the Ten Thousand Things. Next up? I’m off to 1920s colonial Kenya with Paula McLain’s highly anticipated Circling the Sun, the author’s follow-up to 2011’s bestselling The Paris Wife. But I’m most excited to dive into Natasha Pulley’s spec-fic debut The Watchmaker of Filigree Street, the perfect gears-and-cranks heavy escape for steampunk vets and history-lovers alike.

Pick up any of these 13 July 2015 releases to reinvigorate your summer reading routine.

The Love She Left Behind by Amanda Coe (July 6; Norton)

In the late 1970s, Patrick, a playwright, marries Sara, his muse — which means that Sara abandons her husband and pre-teen children, Louise and Nigel, to forge a new bohemian life. Thirty years later, those abandoned children travel to Patrick's crumbling Cornwall mansion when Sara dies suddenly of stomach cancer. Coe, who has written one previous book and has also written for U.K.'s Shameless, is a master of the blackly comic, character-driven plot: each character, motivated by separate histories, handles their heartbreak differently (Oxford-educated Nigel, bitterly; provincial Louise, blubberingly; washed-up Patrick, drunkenly). The Love She Left Behind is dysfunctional family drama at its most satisfying: think Death at a Funeral (U.K.) meets Anne Enright's The Green Road with a dash of David Nicholls' dry wit for good measure.

What do WWII codebreaker Alan Turing, a New World-bound Puritan girl, a hippie-era computer science professor, an imprisoned inventor, and a young girl engaged in a virtual conversation with a "chatbot" have in common? Nope, it's not the makings of a convoluted joke: these five characters are the chorus that fulfill the titular command in Louisa Hall's stunning new novel. Though separated by time, space, and purpose, each of these characters — who tell their stories alternately, and through differing mediums — come to reflect, in some way, on their relationships with artificial intelligence and their inability to connect with other human beings. Comparisons to Margaret Atwood, David Mitchell, and Helen Phillips will abound, but the remarkable Speak is a unique creation that stands on its own.

The Gods of Tango by Carolina De Robertis (July 7; Knopf)

The history of women "passing" as men in literature is a strong one: take Shakespeare's rebellious heroines in As You Like It , or Virginia Woolf's revolutionary Orlando. With her ambitious third novel The Gods of Tango, Carolina De Robertis adds a new name to this list: Leda Mazzoni, who takes on her deceased husband Dante's identity in order to play the tango music she loves. As a 17-year-old Italian immigrant to Buenos Aires in 1913, with no money or family, Leda is left with few options when Dante dies — so instead of choosing a life of prostitution, she chooses to don his clothes and his name to forge a new life as a man. De Robertis masterfully navigates the sensuous world of Buenos Aires' rich musical heritage, and writes bravely and compassionately about Dante's newfound passion — both as a musician and as a man.

When they are 12 years old, both bookish Lois and beauty queen Carly May are abducted from their hometowns in Connecticut and Nebraska, respectively, and locked up in the woods by their kidnappers for two months. Then they are released. Twenty years on, Lois and Carly May reunite and rehash what happened during those six strange weeks. Maggie Mitchell's Pretty Is is an addictive read — Lois' and Carly May's alternating narrations keep the pace moving forward irresistibly — but it also kindles provocative ideas about our culture's obsession with real-life horror stories. Don't get too attached to your copy; you'll be lending it out to everyone you know this summer.

The Small Backs of Children by Lidia Yuknavitch (July 7; Harper)

Summer reading ≠ beach reads. Lidia Yuknavitch's The Small Backs of Children fits that equation: drunken sun bunnies and/or the generally weak of heart need not apply. The gist is an unnamed writer becomes obsessed with a photojournalist's image of a young girl escaping from an unspecified Eastern European conflict. But the plot serves mainly as a vehicle for Yuknavitch's evocative writing, which alternates between experimentally minimalist and shockingly visceral. Yuknavitch doesn't shy away from exposing the horrors both of war, and of the troubled inner workings of a brilliant, artistic mind. This haunting but beautiful novel will stick with you long after the weather's turned.

The Shanleys are your typical Upper West Side, boho-bougie family: Jack is an artist; Deb is a ballet instructor; and their children, 15-year-old Simon and 11-year-old Kay, do the usual city-kid things like smoke weed in parking lots on the West Side Highway (the former) and buy ice cream at the deli down the street (the latter). But when Jack's vapid lover — surprise! He's cheating — sends a box of the couple's explicit notes to each other, it falls into the unwitting children's hands before his wife's, which unravels the family in ways no one expects. Among the Ten Thousand Things, Julia Pierpont's debut, painstakingly tracks the family's disintegration with a wisdom that belies the writer's 28 years. This is a quiet, domestic drama at its most sophisticated, affecting, and poetic. It's heartbreakingly beautiful.

I could wax poetic about Harper Lee's feverishly anticipated new novel, but the wheels have already been set in motion: whether or not you actually even read To Kill a Mockingbird in high school, you already know you're buying Go Set a Watchman. This follow-up to the Pulitzer Prize-winning 1960 novel follows Scout Finch 20 years after the events of TKAM as she returns home to Maycomb, Alabama to visit her father, Atticus. Can Go Set a Watchman possibly live up to the hype? You'll just have to read it to find out.

The Watchmaker of Filigree Street by Natasha Pulley (July 14; Bloomsbury)

London, 1883. Thaniel Steepleton is a synesthetic telegraphist for the Home Office. Grace Carrow is a brilliant physics student at Oxford. Akira Matsumoto, also a student at Oxford, is a close relative to the Emperor of Japan. And Keita Mori is a gifted watchmaker. What pulls these fascinating characters together in Natasha Pulley's masterful steampunk/mystery/historical fiction debut is a thrilling tale that sweeps readers into a dark and magical past. While The Watchmaker of Filigree Street is reminiscent of such steampunk classics as William Gibson and Bruce Sterling's The Difference Engine , Pulley's novel grounds itself in historical accuracy and exquisite prose, and even genre-adverse readers will be hooked.

Let Me Explain You by Annie Liontas (July 14; Scribner)

"Let me explain you something: I am sick in a way that no doctor would have much understanding." So begins Stavros Stavros "Steve" Mavrakis' email to his three daughters and ex-wife, alerting them to the fact that, in ten days' time, the diner owner will be dead in accordance with what he believes is a prophetic dream. It's clear from the novel's first line that its central character is a force to be reckoned with — a force many of you will profoundly dislike — but it's also a testament to Annie Liontas' keen ear for that Greek-New Jerseyan patois (which is so evocative it's reason enough to read Let Me Explain You) and sensitivity to the inner workings of a modern family. And while Steve's elephantine personality could virtually constitute its own Greek chorus, Liontas writes the women who surround him with equal amounts of verve, and more than enough heart, to soften his rough edges.

In this elegant short story collection, now being published in English for the first time, Juan Gabriel Vásquez offers seven masterfully-crafted glimpses of history and life in Belgium, where the celebrated Colombian writer lived for a year. Lovers On All Saints' Day is a clinic in writing sparingly and purposefully, but Vásquez maintains a lush continental sophistication that American readers (and writers) will covet. These are stories to read slowly — savor them each like a square of rich, dark chocolate.

When Heidi Wood — wife, mother, ESL teacher, good samaritan — keeps seeing a waifish young girl with a baby strapped to her chest on Chicago's El train, her maternal instincts kick in and she invites the girl, Willow, back to her home. Because Mary Kubica masterminded one of 2014's most exciting psychological thrillers ( The Good Girl ), you know Heidi's well-meaning gesture is a recipe for disaster. In Pretty Baby, Kubica offers a satisfyingly twisted plot and a killer ending that even the sleuthiest readers won't see coming.

Eva Thorvald's parents met at a restaurant, where Lars was a cook and Cynthia the head waitress. Although Cynthia left Lars and her new baby for a West Coast sommelier, and Lars died a few months after that, her parents' love for good food and its unparalleled pleasure (see Lars' meal plan for his weeks-old daughter, which includes a tapenade made with pureed Cerignola olives) nevertheless remains embedded in Eva's DNA: she goes on to become one of this century's hottest young chefs, running a pop-up supper club and putting the Midwest on the cutting-edge culinary map. Stradal's debut is charming, rife with hardy, self-deprecating humor, but in Kitchens of the Great Midwest this short story writer really proves his mettle as a novelist to look out for.

In 1936, Beryl Markham became the first solo female aviator to cross the Atlantic from east to west, taking off in her native England and landing in Canada. But Markham was even more than a trailblazing aviator: she was also an expert horse trainer, a writer, and a society darling who became ensconced in a legendary love triangle. In Circling the Sun, Paula McLain brings this remarkable woman to life, recounting in first-person narration Beryl's determination, her passion, and her deep reverence for Kenya, the place she adopted as home when her colonialist father moved the family there in the early 1900s. McLain is an exquisite writer, and it's a true joy to discover both Beryl and this fascinating colonial culture with her.