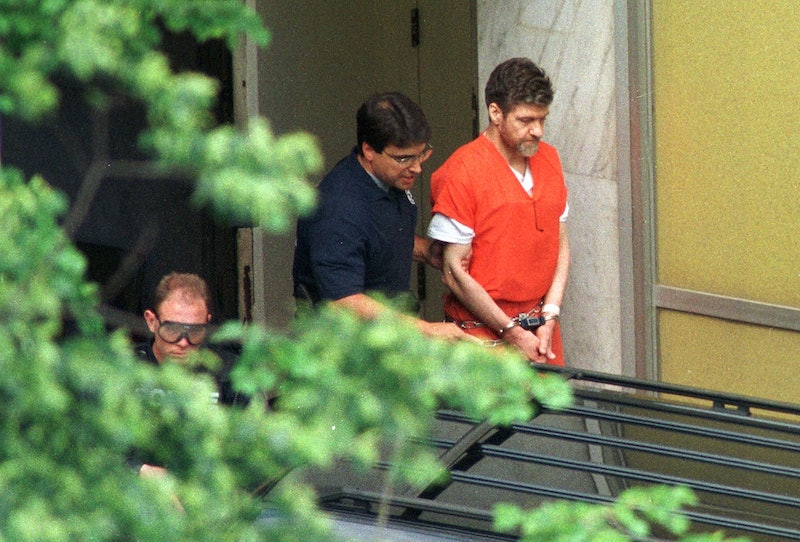 Moments come, and moments go. When you think of all the high-profile stories that have rocked the United States over the last few decades, it's striking how quickly a once-dramatic incident, or an infamous figure can fade into the background. Case in point: What is the Unabomber, Ted Kaczynski, doing now?

If you came of age in the 1990s, odds are the name rings a bell. Kaczynski, a former mathematics professor at the University of California Berkeley, was apprehended in 1996 after one of the costliest investigations in the history of the FBI — he'd been sending letter-bombs (and placing physical ones) to strike universities and private citizens for 18 years, resulting in the deaths of three people, and gruesome injuries to many more.

His motives made headlines, and that was just how he wanted it — in 1995, he sent a sprawling manifesto to The New York Times, threatening that he'd kill again if they didn't print it (they ultimately did, under advisement from the FBI and then-Attorney General Janet Reno). Kaczynski considered himself a survivalist, and was an advocate of a sort of naturalist anarchy, leading him to target universities and people working in technology fields. Of the three victims who died, one owned a computer store, one worked in advertising, and one was a lobbyist for the logging industry.

When he was finally arrested in 1996 (thanks in large part to a tip from his brother and sister-in-law, who recognized the deranged manifesto as something he'd write), his spare Montana shack became similarly infamous, an iconic image of an ideologue serial murderer's base of operations.

So, what's happened to Kaczynski in the meantime, and where is he now? As questions go, this one has a pretty simple answer: He's in prison, exactly where he's been every day since his conviction in 1998. Kaczynski entered a guilty plea, which landed him eight life sentences to be served at the infamous ADX Florence supermax prison in Colorado. ADX Florence is home to some high-profile criminals besides Kaczynski — it's also the home of Richard Reid, the man who attempted to bring down an American Airlines flight with a shoe-bomb in 2001, and where recently convicted Boston Marathon bomber Dzhokhar Tsarnaev sits on death row.

As the Smoking Gun reported in 2003, Kaczynski's life behind bars is a pretty mundane one, at least it was when it was about five years in — just dealing with the day-to-day grind and struggling to negotiate the prison's mail service. He did briefly flare up in the news in 2008, when he objected to the Newseum in Washington, D.C. displaying his shack as an exhibit.

There's no telling how long Kaczynski will stay behind bars. That's not to suggest he's getting out — he has no opportunity for parole — but rather, to point out that he's getting rather long in the tooth. His career as a serial bomber ran from age 36 to age 53, and he's currently 73 years old.