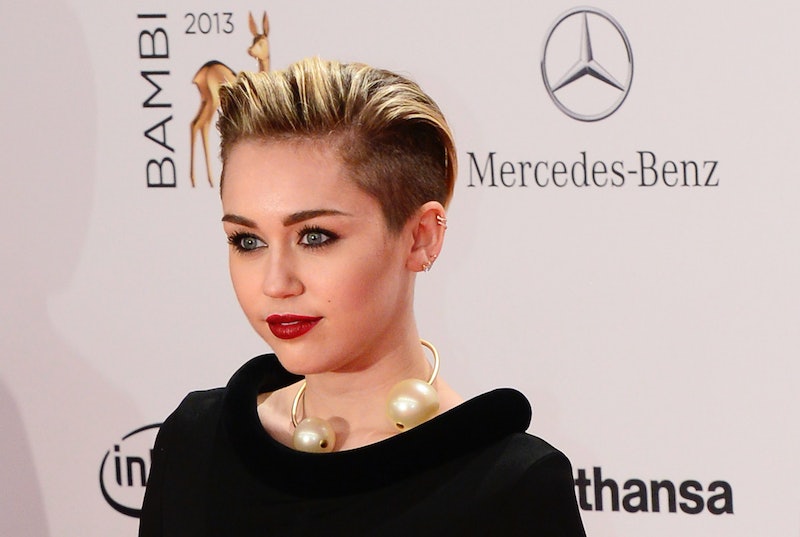 There are so many reasons to love Miley Cyrus — from her music to her empowering messages about feminism and sex — but this is definitely one of the biggest. In a recent interview with Paper magazine, Cyrus opened up about her sexuality, once again proving that she always does her best to empower others with each move she makes.

Cyrus was predictably her candid, well-spoken self when she addressed the topic with Paper, explaining that when she was 14, she was honest with her mother, Tish.

"I remember telling her I admire women in a different way," Cyrus said. "And she asked me what that meant. And I said, I love them. I love them like I love boys. And it was so hard for her to understand. She didn't want me to be judged and she didn't want me to go to hell. But she believes in me more than she believes in any god. I just asked for her to accept me. And she has."

Cyrus also elaborated on her views on sexuality and gender identification, saying, "I am literally open to every single thing that is consenting and doesn't involve an animal and everyone is of age. Everything that's legal, I'm down with. Yo, I'm down with any adult — anyone over the age of 18 who is down to love me. I don't relate to being boy or girl, and I don't have to have my partner relate to boy or girl."

The singer's statements are so incredibly important for a variety of reasons. The first being that for all of her fans and for those who read the interview (including any number of her nearly 20 million Twitter followers), she's reinforcing self-acceptance. In a society riddled with criticism over straying from the norm, Cyrus continues to push boundaries and encourage others to embrace themselves, even when it's not easy.

And, as Cyrus herself explained, her own journey wasn't without its speed-bumps. By sharing her mother's reaction, and subsequent support, she's showing the world an honest portrayal of a subject that is still considered taboo by many.

Public conversation about sexuality and gender identity is more active than ever. Below the surface of Cyrus' frank confession and views on acceptance is an equally powerful message: One of love. No matter a person's gender identity or sexuality, it's a value lesson to be learned. For Cyrus to use her platform to encourage this kind of peaceful outlook furthers the conversation without tearing anyone else down.

I admire Cyrus for her fearlessness. It's easy to sit out of the public eye and analyze the actions of others; it's significantly harder to be that person who steps up and takes risks to be honest. Cyrus' attitude and honest are empowering to any person — and for that, she deserves a round of applause.