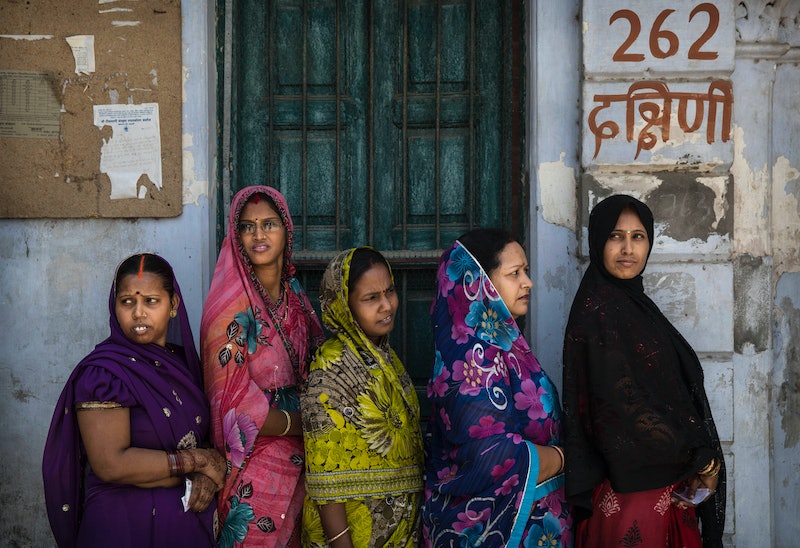 Sadly, women in India have faced significant violations of their human rights for centuries. From rape and domestic violence to forced labor and denial of educational opportunities, the struggle for rights and empowerment is a daunting one for Indian women. In the world's second-largest country, hundreds of millions of women are still affected by some of these issues. Women's rights are vital to the success and growth of developing nations, making projects that empower Indian women vital to the well-being of the entire country.

While Indian women and girls technically have constitutional rights equal to men in many regards — including citizenship and access to primary education — the reality is often radically different. Socially, women can be regarded as lesser humans, and face frightening levels of sexual assault and violence.

Because India has a population of 1.2 billion, and has many distinct cultural groups, it is very difficult, if not impossible, to generalize about the population of the entire country. However, it is entirely clear that overall, women need advocates and allies across the country that will fight with them for not only their safety and health, but also for access to further opportunities for empowerment and autonomy. Here are some of the major players committed to improving the lives of women in India.

About 64 percent of young girls will drop out of school before the 8th grade in India. In order to combat these high drop-out rates and the lack of educational opportunities for Indian girls, Commit2Change seeks to provide education for orphaned girls and other at-risk young women in India. Commit2Change believes that education is one of the best avenues for young Indian girls to avoid cycles of poverty, provide better access to and information about nutrition, and greatly improve the entire country's GDP.

Rape is an issue of massive proportions in India: an Indian woman is raped every 20 minutes, and approximately one in ten rapes are committed against women under the age of 18. Because laws against rape in India do not provide women with nearly enough protection, the organization Sayfty emerged to equip women with tools that help keep them safe from acts of sexual violence, and educate women in matters of self-defense. While the ideal is that women would be free from the threat of physical violence without having to live in fear, organizations like Sayfty help to empower Indian women by equipping them with knowledge and tools that will help to keep them safe.

Sanitation management is a difficult issue across India, and women are highly impacted by lack of access to products that make their periods safe. Lack of education around periods in India creates many problems, in fact, around 10 percent of girls in India think that their period is a kind of disease. WASH United seeks to educate Indian communities about periods and menstruation, hoping to lessen the negative effects of the taboo surrounding periods, and help women and girls to have safe, hygienic periods.

Women are the primary gatherers of water in rural and poor areas of India, a task that frequently involves many miles of walking with heavy containers filled with water. Because of a major drought in western India, some men in villages most affected by the water shortage have taken to marrying additional wives, purely for the purpose of having more water brought to their homes. In order to bring safe and cost-effective water to slums and rural areas, Sarvajal is combining technology with humanitarian thinking to the Indian water crisis. Sarvajal brings "water ATMs" that dispense clean water at affordable costs to communities where water is scarce.

Poverty creates challenges for all of India's poor, but women and girls face child marriages, forced prostitution, or indentured servitude in order to escape the cycle of poverty. Creating sustainable methods of income for women has become the priority for many non-profit organizations including Women on Wings. Women on Wings has created 182,000 jobs for women in rural India, resulting in improved conditions for their entire communities. It has been shown that women in India tend to spend their earnings on goods that benefit children and their community at large, meaning that an investment in India's women is an investment for the whole country.

Founded by women who were featured in the documentary, The Selling of Innocents, which discussed the sex-trafficking of Indian women, Apne Aap is a group dedicated to creating empowerment groups for Indian women. The groups provide a safe place for women to discuss their rights, and learn about options that can help keep them safe from a life of forced prostitution and sex slaving. Apne Aap helps women to connect with another, share stories, and share opportunities for safe employment and education.