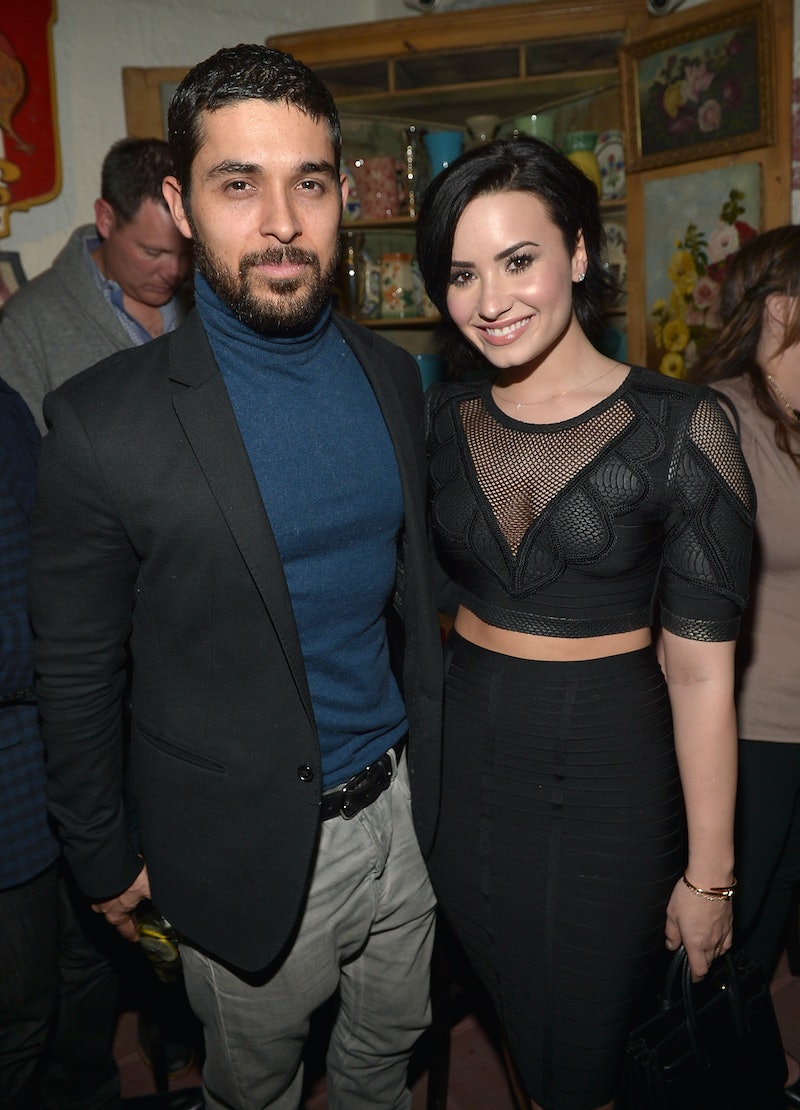 Whether he's surprising Demi Lovato or (literally!) lending his face to her Devonne by Demi skincare line, Wilmer Valderrama constantly reminds me that he's boyfriend goals. The two are super-talented in their own rights, but together they're one of Hollywood's cutest couples. When Valderrama hinted that he may be hitting the studio with Lovato, it makes perfect sense. Just another way they can conquer the world, right?

The actor told Teen Vogue that he may collaborate with Lovato in the future, saying, "There may or may not be something in the works ... I'll tell you that I have too much respect for her talent. To me, she is one of the Top 2, if not the No. 1 vocalists in the music industry right now."

But, if these two don't work together on a song, they might join forces for a music video.

"I haven't [directed a music video for her] yet, because there haven't been conversations about new ones," Valderrama said. "But I'm sure there is one at one point. I may have an idea or two!"

Yes. So much yes. Valderrama and Lovato wouldn't be the first power couple to collaborate on music. In fact, quite a few lovebirds have hit the studio together to put their feelings into song. These seven just happen to be my favorites:

The world knows a lot more about Bey and Jay's one-on-one time, thanks to the steamy lyrics of "Drunk in Love." (Honorable mention to their earlier collaborations "Crazy in Love" and "'​03 Bonnie & Clyde.")

2. Jessica Simpson and Nick Lachey: "Where You Are"

This one takes me way, way back. Jessica Simpson belting out lyrics about her first love and a feature by future ex-husband Nick Lachey? Hello, 2000.

3. John Mayer and Katy Perry: "Who You Love"

"Who You Love" is a sweet reminder why John Mayer and Katy Perry are kind of perfect together. Also, the accompanying music video is kind of amazing.

4. Nick Jonas and Miley Cyrus: "Before the Storm"

Back in 2009, Nick Jonas and Miley Cyrus were a pop music power couple. A lot has changed since then, but I'm happy to see they've both achieved massive success as solo artists.

Let's take it back to the Camp Rock days. Lovato and Jonas were the ideal couple of our Disney dreams. Although they've both moved on, their undeniable chemistry is forever preserved with this song.

In a post-Nariana world, these lyrics are heartbreakingly honest. However, watching Ariana Grande and Nathan Sykes duet this track made it clear that they had sparks.

Jason Derulo and Jordin Sparks were an unabashedly adorable couple until their unfortunate breakup. Luckily, we can always remember the happier times, thanks to this steamy song.

And if we're lucky, we'll soon be able to place Wilmer & Demi on this list. Don't let me down, you two!